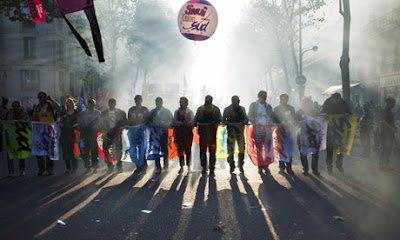 French unions extended a rail strike into a second day and blockaded oil refineries in protest at pension reforms today, but there were signs the stoppages could be losing steam as broad participation wavered.

With the pensions bill due to be approved within days by the senate, President Nicolas Sarkozy's conservative government stood firm on its flagship reform, despite a national strike yesterday that brought more than a million marchers on to the streets.

Union leaders said local meetings throughout France had voted almost unanimously in favour of extending the stoppage in the state railway sector, the bedrock of the protests. But they acknowledged turnout had fallen.

Strong support for an extended strike would raise the pressure on Sarkozy, whose government would be significantly weakened by a climb-down ahead of elections in early 2012.

"The stoppage has been extended until at least Thursday, which will be a decisive day for its continuation," said Bruno Duchemin, the secretary general of the FGAAC-CFDT railworkers' union.

France's state-run SNCF railways said only about a quarter of its workers had walked out today, down from 40% yesterday, with two-thirds of high-speed trains and more than half of regional trains running normally. Some 135 schools were affected today, compared with 357 yesterday, the education ministry said.

In the energy sector, workers halted the transport of fuel from eight of France's 12 refineries and blockaded a handful of the country's 160 fuel depots, raising the spectre of petrol shortages. With unions at five refineries starting to shut down production and France's biggest oil port at Marseille hit by a two-week-old strike, the oil sector lobby UFIP has said localised fuel shortages could hit petrol stations by the middle of next week.

The government, which says 1.23 million marchers took to the streets yesterday compared with union estimates of 3.5 million, said it would press ahead with a reform its says is needed to restore state finances to health and retain France's AAA credit rating.

"I'm not denying there were a lot of people in the streets but at the same time what can we do? Not reform the pension system?" the labour minister, Eric Woerth, told RTL radio, saying only minor amendments were possible before senate approval.

Sarkozy's government says the reform is essential to balance a pension system which would otherwise bleed €45bn (£39.6bn) a year by 2020. The legislation raises the minimum retirement age from 60 to 62, and raises the age at which workers become eligible for full pension from 65 to 67. Opposition and government senators said they hoped to end discussion of the bill soon, possibly before the weekend.

Unions, which overturned a 1995 attempt to reform the system with 24 days of strikes, said protests would continue regardless of whether the bill passed in the senate.

Analysts said the main risk to Sarkozy was if protests spread to university students and those angry at his broader agenda. In an attempt to defuse tension, his UMP party said yesterday that it would review an unpopular tax ceiling for the rich.

"There is an increasing probability the government will seek deeper negotiations over the proposed reforms to counter the increasing protests," said Barclays analyst Laurence Boone.

The French and Greeks aren't shy about protesting against pension and economic reforms. You got to admire their tenacity as they exercise their democratic rights. Unlike the electronically lobotomized population of North America, they still believe in fighting for social justice.

Unfortunately, it's a lost cause. As I watch the Foreclosure-Gate scandal play out, I'm starting to believe that this "epic" financial crisis was in the making for years and will be used as an excuse to ram through sweeping social and economic reforms. Meanwhile, Bubble Ben keeps the printing press going, and the financial elite are reaping huge rewards:

Just two years after the global financial crisis that threatened to destroy the banking industry, Wall Street bonuses have hit a record high. According to The Wall Street Journal, employees at America's biggest banks are set to reward themselves with $144 billion in compensation and benefits this year — a 4 percent increase over last year's record haul. The hefty bonuses come as many industries continue to struggle in the face of difficult economic conditions and the jobless rate holds steady at 9.6 percent. Has Wall Street overstepped yet again? (Watch an MSNBC discussion about the record bonuses)

All this makes me wonder, is the end near? My good friend, Jonathan Nitzan, and his collaborator, Shimshon Bichler, will be presenting later this month at a conference on "Crisis of Capital, Crisis of Theory," Organized by the Forum on Capital as Power:

Is capitalism about to collapse? Like every other mode of power, capitalism rests on confidence in obedience: the confidence of the rulers in the obedience of the ruled. Emperors are sure of their rule over obedient subjects and slaves; lords are certain they can rule their obedient vassals and serfs; and capitalists trust the obedience of their underlying masses. The confidence of rulers is mediated through their dominant dogma: when the dogma holds, the rulers are hubristic, steadfast and ruthless; when the dogma disintegrates, the rulers, gripped by systemic fear, become hesitant and lose their ability to rule.

Systemic fear often culminates in systemic collapse. The downfall of the last Babylonian emperor, Belshazzar, the collapse of Easter Island, the French Revolution against the ancien régime, the fall of Soviet Union and many more such episodes were all preceded by systemic fear: for whatever reason, the rulers lost faith in their dogma and confidence in their subjects’ obedience. But their systemic fear remained elusive: we know of it only anecdotally, subjectively, and always retrospectively – after their mode of power lies in ruins.

Modern finance has made systemic fear transparent. For the first time in history, we have an objective, numerical measure of the rulers’ confidence in obedience – and this measure is available not in retrospect, but here and now. The indicator in question is forward-looking capitalization: the financial ritual with which capitalists discount to present value their expected future profit. This ritual stands at the heart of the modern capitalist dogma, and it is currently broken: for the past decade, capitalists have been looking not forward to the future, but backward to the past. In other words, capitalists no longer trust their own dogma: they are no longer confident in the obedience of the ruled or in their own ability to rule.

I invite my readers to download Jonathan and Shimshon's paper, Systemic Fear, Modern Finance, and the Future of Capitalism. Before you dismiss it as neo-Marxist rhetoric, I warn you, Jonathan was an Associate Editor of the BCA Emerging Markets team, and he's extremely familiar with the frivolity of modern day portfolio theory and the deficiencies of neoclassical economic theory which dominate our classrooms. He's one of the smartest guys I ever met, and I just love listening to him and Tom Naylor get into it at our Men's Club meeting every quarter (last time I wrote about this "prestigious club" was when Bilderberg was plotting to sink the global economy).

I keep things simple. The power elite have every intention to keep Casino Capitalism going for as long as they possibly can. It's in their best interest to do so. That's why all of Wall Street is playing the 'Bernanke put' taking on as much risk as possible to reap even more bonuses than the previous year, prompting David Weidner of MarketWatch to rightly observe, the death of pay for performance:

Clawbacks, deferred compensation — they sounded like good ideas at the time. But regulators, at the urging of the industry, shunned any long-term of the review of Wall Street pay structure.

And what has it brought? A new study of 2010 compensation by The Wall Street Journal found that the industry will pay out a record $144 billion this year. The compensation represents a 4% increase from 2009. It also slightly outpaces a 3% revenue increase at the big brokerages — most earned in the early part of the year. See WSJ report on Wall Street pay.

The numbers starkly contrast the reality for most Americans. Those lucky enough to have work are seeing little, if any, rise in wages. The pay figures also sharply underscore how reform, bailouts and aftermath of the financial crisis failed to influence pay.

In the most heated days of the financial crisis, some banks moved forward. Morgan Stanley adopted reforms that put more emphasis on deferred pay. Some banks in Europe adopted clawback provisions or built bonus pools invested in toxic securities.

But most Wall Street banks only accepted pay rules forced upon them through the Troubled Asset Relief Program, and even those rules were only targeted toward those which received exceptional aid: American International Group Inc. , Bank of America Corp. , Citigroup Inc., General Motors and Chrysler.

How onerous was pay czar Kenneth Feinberg? Well, no one’s missed a meal.

That said, pay does seem to be changing in the financial world. Up until the crisis, those who took inordinate risks resulting in short-term profits took heaps of money home despite the long-term consequences of their bets.

Today, it appears pay goes up whether or not those bets create any value at all.

The distributional effects of this financial crisis are rarely discussed. Americans got a  glimpse into the ultra secret world of high-frequency trading on 60 Minutes this past Sunday, but that's only the tip of the iceberg.

The shadow banking business has not dried up. Pensions, in their insatiable quest for "alpha", are still pumping billions into hedge funds and private equity funds. And the Fed and other central bankers are pumping trillions into the financial system.

And what's the end game? Who knows? It's in every financial player's interest to keep this sucker going for as long as possible. New bubbles in commodities and other sectors are forming at this very moment. And political and financial leaders like Sarkozy and Bernanke must be thinking, "Après moi, le déluge".