CalSTRS' shortfall grows to $56B

The pension system for California's teachers has $56 billion less than it needs to cover the benefits promised to its 852,000 members and their families, the fund reported Thursday, as big investment losses in 2008 continue to reverberate.

The drop in value was enough to trigger an automatic increase in the amount the state must pay into the California State Teachers' Retirement System, which is the nation's second largest public pension fund. That will boost the payment from California's already strained general fund by 20 percent — from $573 million to $688 million — in the fiscal year starting July 1.

The pension shortfall as of June 30, 2010, was $15.5 billion greater than it had been a year earlier, CalSTRS officials said. The fund had expected the shortfall to be even greater, but educators received smaller raises than projected, reducing the ultimate amount of their retirement benefits, and the fund's investments performed better than expected in the 2009-10 fiscal year.

The pension fund's assets at the end of June were enough to cover 71 percent of its accrued liabilities over the next 30 years, down from 78 percent a year earlier.

The number itself isn't cause for alarm but is headed in the wrong direction, said Ed Derman, CalSTRS' deputy CEO, who discussed the latest projections from the fund's accountants in a conference call with reporters.

At this rate, he said, the system will run out of money to pay benefits in 2042 unless workers, school districts and the state work out a long-term plan to fix the funding problems. The report will be presented next week to the CalSTRS board, but any fix would require action by the state Legislature.

The funding shortfall results from numerous factors, especially from steep investment losses during the Great Recession, and hits just as a wave of baby boomers begins entering retirement. Longer life expectancies than planners projected when they set up the system also are increasing costs.

"CalSTRS needs a significant increase in revenue to make progress toward its funding target," the actuarial report said.

That could come through higher contributions from workers, school districts or the state, as well as higher returns on investments than currently projected.

"This once again shows how much pension reform is needed because the taxpayer is on the hook," said Assemblyman Allan Mansoor, R-Costa Mesa, who is vice chairman of a committee that would review any bill asking for increased contributions.

Unlike the California Public Employees' Retirement System, the teachers' fund cannot set the amounts that workers, employers and the state must pay toward retirement benefits.

Contributions for the teachers fund are set by statute, while the trigger for the increased state payment was written into law more than a decade ago. The $688 million payment from the state's general fund required under the trigger already has been factored into the governor's budget calculations for 2011-12, even as California faces a multibillion dollar deficit.

As recently as 2000, CalSTRS had more than enough assets to cover the retirement promises it had made to teachers and school administrators. The fallout from the dot-com bust that started at the end of the 1990s began eroding investment returns, which plunged during the most recent recession.

News of the shortfall comes amid a national debate over pensions for public employees and as conservatives in California seek changes to the lifetime defined benefit plans offered state workers, perhaps through a future ballot initiative.

Critics contend the plans — which guarantee certain benefits based on workers' salaries and how long they worked — provide richer benefits than those offered to private sector workers and underestimate costs, leaving taxpayers on the hook for the unfunded liabilities. Several proposals have been floated in California to reduce pension benefits for current or future workers, but they face significant legal or political hurdles.

Most of the jump in the teachers fund shortfall came because of the way the number is calculated, the fund's accountants said. The fund took an enormous hit to its stock portfolio when the market plunged during the heart of the recession, losing nearly $43 billion — roughly 25 percent of its value — from June 2008 to June 2009.

The teachers fund spreads that loss over three years when it calculates its long-term obligations. Even though the stock portfolio has been posting annual gains close to 13 percent over the past 18 months, the gains are being buried in the calculation by the much larger 2008 losses.

The teachers fund portfolio was worth $146.4 billion as of Dec. 31, 2010. CalPERS, the nation's largest public pension fund, covers 1.6 million retirees and government workers and their families, and had a portfolio worth $225.7 billion on Dec. 31.

CalSTRS members who retired during the 2009-10 fiscal year received a median individual benefit of about $49,000 a year, meaning half received less and half received more. Its members are not covered by Social Security.

About 2.2 percent of the 220,000 members receiving benefits are paid more than $100,000 a year, including spousal and survivor benefits.

The pension fund for California's teachers is facing a $56 billion shortfall, even as its investments are doing better than expected.

The drop reported Thursday is enough to trigger an automatic increase in the amount the state must pay into the nation's second largest public pension fund. Payments from California's general fund will increase by 20 percent in the coming fiscal year, to $688 million.

The shortfall grew by more than $15 billion in one year. The fund now has enough assets to cover just 71 percent of what it will owe retirees over the next 30 years.

That's mainly because it suffered huge losses during 2008 and 2009. Even though investments have been rising faster than expected for the past 18 months, it's not enough to offset the losses.

Established in 1913, The California State Teachers' Retirement System (CalSTRS) is one of the oldest state supported pension funds. CalSTRS is the largest teachers' retirement fund portfolio in the country, and also the seventh largest public pension fund in the world. The pension fund provides retirement, disability and survivor benefits to almost 900,000 state educators working in the state of California.

After seeing huge losses during the financial crises, CalSTRS is still trying to recover its asset base, particularly real estate investments. The pension fund's portfolio managers run several diversified investments. As of February, CalSTSR's asset allocation is as follows (click to enlarge):

CalSTRS' largest asset allocation is in global equities. The retirement portfolio has $83.5 billion invested in global equities. Approximately 30% of these holdings are 'actively managed' by 'professional' portfolio managers employed by CalSTRS. According to the latest filings submitted to I-Metrix Edgar-Online, CalSTRS' largest actively managed equity holdings are as follows:

CalSTRS has a unique equity portfolio where 11 out of 30 top holdings are technology stocks. The pension fund's portfolio managers favor high-tech stocks with research and development centers in Silicon Valley. The largest technology investment is Apple, followed by IBM, and Microsoft. The portfolio also has significant investments in energy equities. Exxon and Chevron are two companies favored by its portfolio managers. The sector breakdown of CalSTRS' portfolio looks like this: 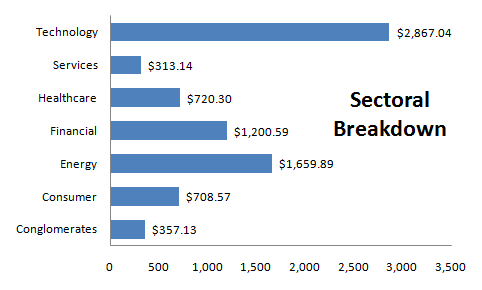 The year-to-date performance of this actively managed portfolio is mediocre. The value-weighted return of top equities is 5.13%, below the S&P 500's (SPY) return of 5.58%. While the ytd performance of energy stocks was outstanding, CalSTRS' technology picks returned only 2.44%. Microsoft and Cisco were the most disappointing picks, returning -7.71%, and -141.%, respectively. The total damage to California's teachers just by those two companies was $27.84 million and $28.12 billion, respectively. The following graph offers sector-wide performance analysis: 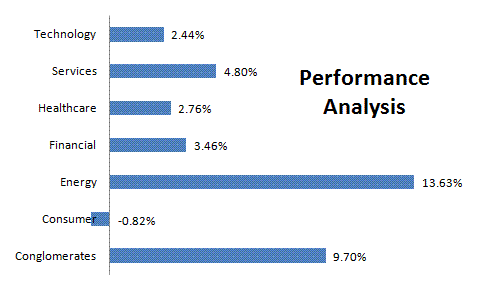 The only conglomerate, General Electric, was a brilliant choice since the stock's ytd return is 10.74%. Exxon and Chevron provided fantastic capital gains that amounted to $101.43 million and $59.55 million, as well. Pfizer, a dividend aristocrat, gained 17.35%, boosting the actively managed portfolio by $40.65 million. Apple, and IBM were other great stock picks returning 11.92%, and 8.08%.

A quick comparison of the actively managed portfolio with the 3rd quarter of 2010 holdings shows no significant adjustments. Almost all of the holdings are slightly increased, generally by no more than by 0.5% to 1%. The only major change was increasing the Citigroup holdings by 7.34%.

However, Citi shares lost 5.92%, costing the retirement portfolio $10.59 million. The year to date performance of this actively managed portfolio is below the market benchmark.

Perhaps it is time for California's teachers to question whether active management is a good strategy, given the underperforming return of their actively managed retirement portfolio.

CalSTRS is widely regarded as one of the best large US pension plans but it took a beating in 2008 and is still trying to get out of a hole. Many other large plans are in the same situation. The analysis above focuses only on public stocks, not on private equity and real estate portfolio. The fact that CalSTRS is long technology and energy might seem like they're taking big risks, but I think it's a smart move. The same goes for their increase in Citi shares.

But bear in mind CaSTRS also has one of the largest and best performing private equity portfolios which is still performing well even though it got hit after the crisis. You can download the quarterly investment reports to get more information on CalSTRS's portfolios. You will also find a quarterly asset allocation and capital markets update by their CIO which is well worth reading.

As for the deficit, no choice but to increase contributions but they're set by statute so it will be hard to change. It is worth noting that an automatic increase in the amount the state must pay into CaSTRS kicked in. These deficits are cyclical but every large plan is going to have to figure out ways to address them and reduce them or else taxpayers will ultimately be on the hook. Onr thing I will bring to your attention, however, is CalSTRS's response to the Little Hoover Report:

On Wednesday, March 8, CalSTRS sent a letter to the Little Hoover Commission in response to its report on public pensions. The letter outlines why the recommendations would likely weaken rather than strengthen retirement security for California’s public educators. In some cases, the Commission’s recommendations could actually increase the total cost of providing retirement benefits.

The report includes broad assumptions and generalizations that do not account for differences between CalSTRS and other public pensions. The report also does not consider the legal ramifications of its recommendations, such as the recommendation to reduce the accrual of future benefits for current active members.

The CalSTRS benefit structure, on a comparative basis with other plans, is not, as the report says, “overly generous,” but rather provides a moderate benefit that replaces approximately 60 percent of pre-retirement income for members – who receive no Social Security benefits for their decades of service.

You can download the letter by clicking here and download the fact sheet on CalSTRS's funding needs by click here. The response letter is well written and states that CalSTRS "will work with stakeholders and legislators to address the funding situation in a manner that respects the budget situation facing the state and schools, while maintaining the financial security of educators in retirement."