The crisis in Europe is causing concerns about deflation in the U.S. and other developed economies after weeks of financial-market turmoil. The fears are most pronounced in Europe, where a combination of spending cuts and tax increases could weigh on economic growth and feed into deflation.

Financial markets are reflecting a diverging expectation. Gold prices have been soaring—a potential indicator of inflation fears—while many other inflation indicators are going the other way.

In the United States, the loose monetary policy has not resulted in any significant rise at the consumer level or changes in inflation expectations, as evidenced by the sharply slowing Consumer Price Index and plunging M3 money supply.

Despite the seemingly tame headline inflation numbers, consumers never seem to see price declines in certain categories like education and health.  For instance, prescription drug inflation escalated to 5% from less than 3% in 2007 and 2008.

So, it is pretty obvious what we have here--biflation--instead of deflation. Biflation is a state of the economy where inflation and deflation occur simultaneously.  (Chart 1) 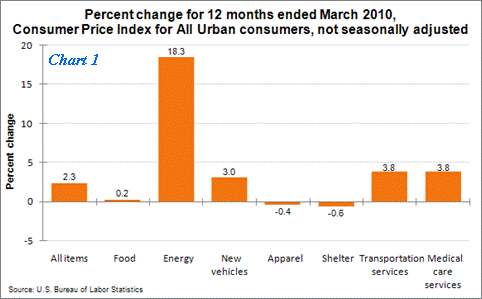 The price increase of commodities is caused by the increased money flow (via loose monetary policy) chasing them. On the other hand, the growth of economy is tempered with high unemployment and decreasing purchasing power. This has resulted in a greater amount of money directed toward essential items (inflation) and away from non-essential items and things required credit to buy such as house and cars (deflation).

Inflation In the Supply Chain

Furthermore, the price at the producer level paints an entirely different picture. Producer Price Index (PPI) for finished goods was up 5.5% year-over-year. Further up the supply chain, signs of inflation are even more worrisome. 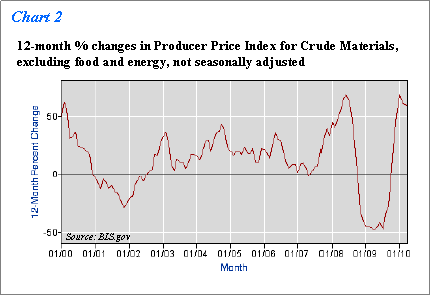 Meanwhile, the Purchasing Manager Index (PMI) report shows manufacturing sector expanded in May for the 10th consecutive month, and the overall economy grew for the 13th consecutive month. Backlogs are also increasing which further points to the inflationary pressure in the pipeline. (Chart 3)

A Tale of Two Inflations

While all of that money Federal Reserve pumped into the system could in theory cause inflation, the Fed is counting on weak banks and slack in the economy would weigh against that. Indeed, it is likely that crude material price increases could begin to move down the supply chain; however, end markets are still too weak to allow a full price increase.

So, in the near term, biflation could be around through possibly 2012 with pockets of inflation seen in certain sectors such as energy and feedstock chemicals, and deflation/low inflation in other sectors, netted to a moderate headline inflaion number. 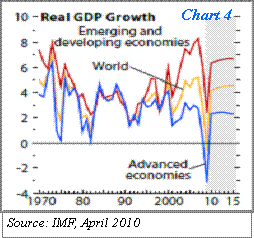 Eventually, as world economy picks up speed, a tale of two inflations would emerge with the very different pace between the developing and advanced economies (Chart 4).

Stagflation--high inflation with slow growth--could manifest in the developed countries like the U.S. and Europe, while the emerging nations such as Chindia would face the challenge of hyperinflation.

At the moment, deflation is still something that cannot be completely ruled out with the private sector deleverages at a faster pace than the Central Banks can fund.

However, I believe the more likely scenario is that the fall of the euro could save Europe from deflation, and the Fed's aggressive money pump, including a possible second stimulation package, will likely keep the U.S. out of it as well.

Nevertheless, the somewhat overhyped debt crisis in Europe seems to have spooked the market as well as the Fed to grossly miscalculate the risk of inflation vs. deflation. As such, more stimulus and inappropriate timing of monetary and fiscal policies could lead to a sudden hyperinflation.

In that sense, it is advisable to allocate for inflation protection so not to put all the eggs in one direction, in case some investors have positioned largely in anticipation of a deflation.

- Gold and other precious metals via physical holding or ETFs – about 3-5% of portfolio as a severe inflation defense
- TIPS Bond - an indexed portfolio of inflation-protected bonds such as the iShares Barclays TIPS Bond Fund (TIP) is a good place for cash to protect against inflation.
- Hard Assets & Resource Producers – Agriculture sector still seems reasonable enough compared with other “hot” commodities. Indexed ETFs such as MarketVectors Agribusiness ETF (MOO) is one option.
(Also see Crude Oil and Copper: Better Value Than Gold and Commodities: Time to Go Long and Physical.)