As gold climbs to new highs, you will get a real-time lesson in why most people make very little if any money investing. Gold is the most obvious bull market of our generation and the public still refuses to participate in force because of nominal prices. This is baffling, but I'm not complaining since this widespread inability to pull the trigger on gold has allowed me to accumulate at relatively cheap prices.

False collective beliefs ultimately drive bubbles to insane levels. Fundamentals don't propel bubbles; pure, raw emotions do. As such, bubbles exhibit unique characteristics that reflect the emotion of investors.  When even the most risk averse person capitulates and buys, that's when you know we're in a bubble.

Gold is a different story. Most people can't even give you an elementary explanation of gold's historic monetary role.  To wit, gold is misunderstood. Many fall into the trap of claiming gold has no intrinsic value because it is not subject to classic discounted cash flow analysis. This is just plain nonsense. Gold is a store of value. Gold is a currency. Gold is a hedge against government stupidity; it is the default currency when governments mismanage their finances.

People need to understand that each individual asset class is unique. An overextended price move in one market may be a normal cyclical move in another market. That's why it's important to understand the historic behavior of any market before jumping to any conclusions based purely on price.

That being said, I briefly examine the price characteristics of stocks and housing respectively before examining the gold market. Each of these markets is unique, and we must allow the data to draw a conclusion for us, not our preconceived notions.

The Nasdaq bubble is a great example of the truism that most bubbles are initially founded on fundamentals. The internet really was a gamechanger. Productivity really did rise tremendously. But when .coms without profits or viable business models (Pets.com anyone?) started garnering multi-million dollar valuations, the Nasdaq became a bubble. People officially lost their minds.

Study enough charts of stock bubbles and you will see a pattern. First comes the slow and steady rise in prices based on fundamentals. This is the bull market stage. Then comes the massive greed-driven spike that trumps previous price movements in one fell swoop. This is the bubble stage. 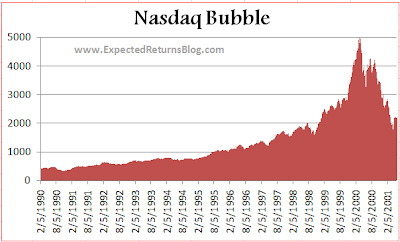 The fundamental underpinnings of the housing bull market were as follows: 1) People need a place to live 2) There's a limited supply of land but an exponentially growing population 3) Home prices never go down nationally.

Each market has its own unique character. If you have ever actually looked at housing data in the U.S. going back a century, you would know that home prices simply track inflation. The whole home appreciation phenomenon was, for the most part, an illusion. That is, until recently, when homes suddenly became an "investment" to trade in and out of like stocks. 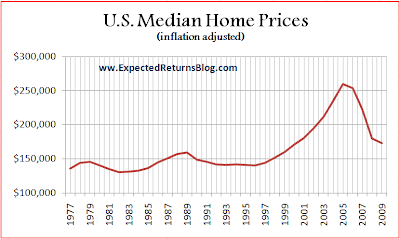 People invariably believe gold is a bubble because it's "expensive." But I must counter by asking: according to what historical metrics? As you saw from the examples above, each market trades to its own rhythm. While an inflation adjusted doubling of home prices is evidence of a bubble, it would be normal price action for stocks.

So what about gold?

The best comparison to today's market I can make is the 1971-1980 gold bull market. The $850 peak gold price was very temporary. The majority of the bull market was priced in the sub-$300 dollar range. It was only when the public got involved- as evidenced by the lines around the block at gold shops- that gold started to bubble over. The public-driven gold frenzy in 1980 is clear from the charts. 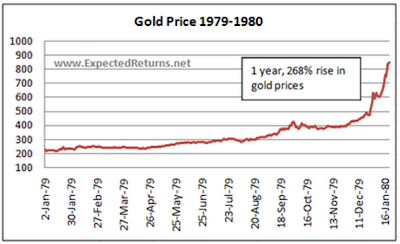 Have we seen anything remotely resembling the 268% annual rise in gold prices in 1980? Far from it. Gold is up 23% in the past 2 years! Gold shares are still below their nominal all-time highs! This sure doesn't look like a bubble to me. 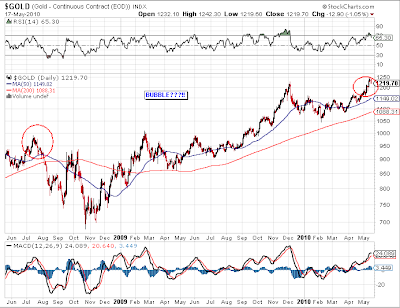 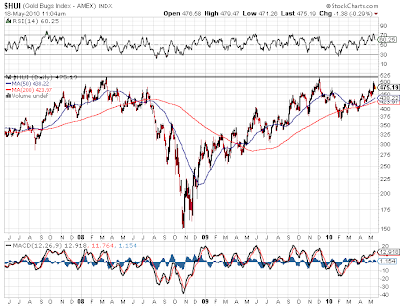 I must be missing something here. Gold tupperware parties are not evidence of a bubble. Why? Because the foolish public is selling. Cash for gold advertisements? Again, the public is selling. So many people miss this very important distinction that it baffles me. Yes there is some public excitement over gold, but it is mostly on the sell side.

I don't even have to talk about the fundamentals of gold to dismiss gold bubble arguments. On a pure price basis, gold can't be regarded as a bubble any more than wheat or oil can at current valuations. So why is there still so much skepticism? I have no idea. But I can assure you that this skepticism will fuel the price of gold higher.