Guest Post: Money Is Not A Tangible “Thing”, It Is A Concept

Money is not a tangible “thing”, it is a concept

1. store of value
2. medium of exchange
3. unit of account

collectively form the abstract concept we refer to as "money". 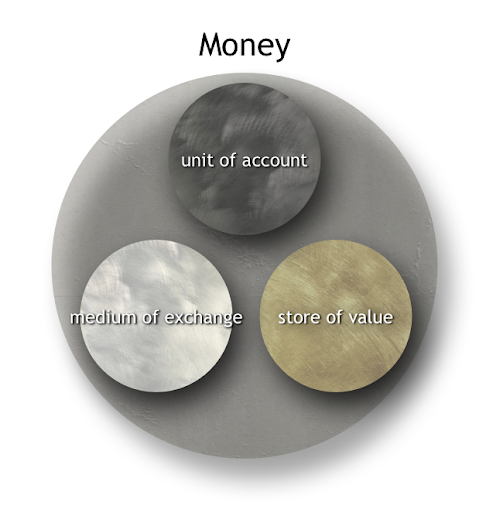 A monetary system which allows borrowing sees the quantity of the medium of exchange increase when borrowing occurs. This is inflationary. The real value (buying power) of that medium is reduced. And when the same thing is used for the medium of exchange and the store of value simultaneously, the real value (buying power) of savings is constantly reduced as well.

Historically, this pressure, and the imbalance it caused in terms of real monetary value, was periodically relieved by losses of confidence in the system, causing panics and bank runs. This is deflationary, and helps return the monetary system, a system of three interdependent mental functions shared by everyone, to an equilibrium: 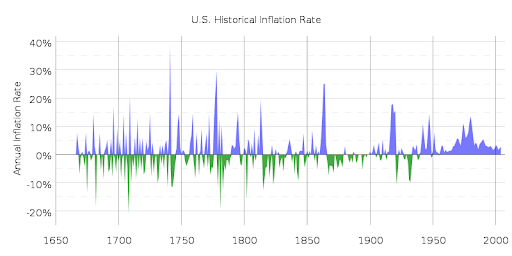 The chart above shows clearly that the market has not corrected this loss of real monetary value  for the last 80 years. Another way to visualize what this chart is demonstrating is to see that the medium of exchange is regularly required to deflate against the store of value, to bring real monetary value  back into balance. In the chart this was the destruction of excess claims (gold-backed dollars) on the physical gold. Medium of exchange deflates against store of value.

Note when the rebalancing on the chart stopped... when the medium of exchange and the store of value stopped being asset-based and became debt-based.

Today, with both functions being filled by debt-backed fiat currency, this deflationary return to equilibrium is unable to occur. Why? When debt is destroyed in this way, it compromises the balance sheets of those holding debt as an asset (remember it is being used as the store of wealth too), resulting in further debt destruction, as debt enters a negative feedback loop.

Deflation of the medium of exchange against the store of value is impossible when they are both the same thing because... it results in systemic collapse.

This collapse can be postponed, and it continually has been, with the continual blowing of asset bubbles, which are fueled with new debt issuance. But the collapse cannot be cancelled, because eventually there is no remaining appetite for more debt.

This is where we are today. Look around you. Do the people you know want to borrow more, or are they seeking to reduce their debts? The mood has changed since the collapse of the housing bubble, the biggest and the last of these debt fueled asset bubbles. In aggregate, debt is being unwound.

There are two options before us: allow the collapse to happen, or the Fed, as the sole issuer of the debt instrument which underpins the entire world debt load, will buy all the debt at face value, before it defaults. This requires the printing of dollars on a continuing and accelerating basis, which inflates away the real monetary value of both the medium of exchange and the store of value. Hyperinflation. The collapse still occurs, it is just delayed a little longer.

Circumstances dictate a fundamental change in the arrangement that is causing the problem: a different medium must be assigned the store of value function, to give the dollar something to deflate against.

Voila! A third option, one which does not result in collapse.

The only feasible store of value the market can select is the same one the market had always used, because it is the only medium meeting all the criteria that the store of value requires, the one which does not share the two major defects of debt because it has no counterparty, and we are unable to create more at will.

Holders of physical gold can be spared loss when this change is made: they will be automatically recapitalized when the exchange rate between gold as the monetary store of value and paper currency as the monetary medium of exchange is left free to float. Central Banks will still hold valuable reserves, for the real value lost from their foreign currency (FX) holdings would be offset by the real value gained by their gold. 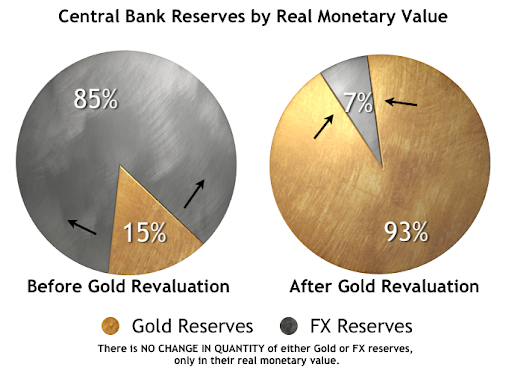 It is the self interest of all of us which will force the change of monetary function, as the only viable option. The very biggest and most influential market participants already  hold gold reserves for just this eventuality, for their own recapitalization in this event. Some of the Central Banks, such as the ECB, India and Russia, already  mark their gold reserves to market. For them, this recapitalizing is already underway, as the value of their gold reserves grow in response to the diminishing value of their FX reserves.

While paper currencies may have turned in a miserable performance as a store of value, they have excelled in their role as medium of exchange, in more ways than one. In digital format it has introduced new efficiency to international trade, and to its usage and management daily by billions of people. While its quantity is easily adjusted by its issuer, indiscriminate issuance of paper can be kept in check by a rising price of gold in said currency, through an international floating exchange rate with physical gold.

This new arrangement leaves us with a self-regulating monetary value equilibrium: physical gold becomes the perfect hedge against inflation. Capital now has a safe harbour, where it can be stored without loss of value while awaiting a sound investment opportunity, not being rushed into misallocation in an attempt to outperform inflation.

What of the monetary unit of account function? Which medium will it utilize?

Both. Whether one uses gold or paper currency in this role will depend entirely upon what one's intentions are for the real monetary value in your possession. If this value is to be used for current expenses, paper currency will be most adequate. On the other hand, if this value is surplus and to be “saved” then gold would be the best vehicle.

There is only one option we will take, because it is the only option that will not result in collapse, and the only one that will recapitalize the system. Physical gold as the floating store of value, a monetary system in which the monetary value equilibrium is self-regulating.

Gold is not money. Gold is the master proxy of value.
Money is the means by which we collectively manage value.

All three of the monetary functions that constitute money are purely mental, and a change of medium in any of them is a collective mental decision. This is a decision our elected leaders are wise to let us make for ourselves.

"There is nothing more powerful than an idea whose time has come."

If you are still with me, you are now part of The Butterfly Effect.