Hungary CDS Off To The Races: +60 On News IMF Mission Chief Going To Budapest For Informal Talks

Retuers reports that the IMF mission chief Rosenberg is going to Budapest to hold informal talks with the new Hungarian government - is this a preamble to the latest admission of austerity failure in an IMF intermediation. Independent of this, Hungary CDS is now exploding wider, and was 60 bps at last check, however this name is now virtually bidless. In other news portofolio.hu reports that Hungary was forced to cut a bond auction today over subdued demand.

Amidst volatile global investor sentiment, which happens to be positive at the moment, Hungary’s Government Debt Management Agency (ÁKK) has observed muted demand at its bond auctions on Thursday. The issuer received HUF 932 bn worth of bids on HUF 50 bn instruments and sold HUF 2 bn less of the 5-yr benchmark bond than originally planned. The average yields came in at around yesterday’s benchmark fixings, but were moderately up from the avg. yields at the previous bond auctions two weeks ago.

Bids for a HUF 25 billion lot of 3-year government bonds (Series 2013/E) totalled HUF 38.7 billion, and the issuer accepted bids only on the original amount on offer. Accepted yields were in a range between 6.26% and 6.39%. The 6.33% average yield is down 1 bp from yesterday’s secondary market benchmark fixing but 15 bps higher than at the previous auction yield two weeks ago. 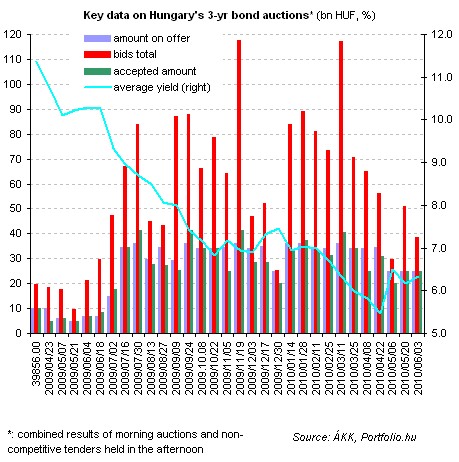 The agency received HUF 29.3 billion in bids for the Series 2016/C 5-year bond, of which HUF 15 billion was on offer. Despite the large enough demand, the issuer allotted HUF 13 bn, i.e. HUF 2 bn less than the original lot. ÁKK chief László András Borbély said the reason behind the cut is that the agency is trying to keep the gap between the average and the highest yields in check and so it choose not to accept some of the bids in higher yield areas.

Accepted bids were between 6.84% and 6.90%. The 6.87% average yield is down 3 bps compared to Wednesday’s benchmark fixing, but 6 bps higher than the avg yield at the previous bond auction. 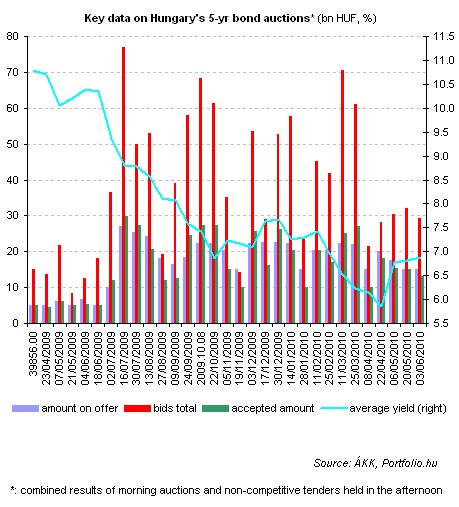 There was HUF 10 bn worth of 10-yr bond (2019/A) on offer, for which bids totalled nearly HUF 24 bn. The bid-to-cover ratio was large enough for the ÁKK to sell the original lot on offer. Accepted yields were between 7.32% and 7.41%. The 7.38% average yield marks a 3-bp rise compared to Wednesday’s benchmark fixing, and is 33 bps higher than at the previous auction two weeks ago. 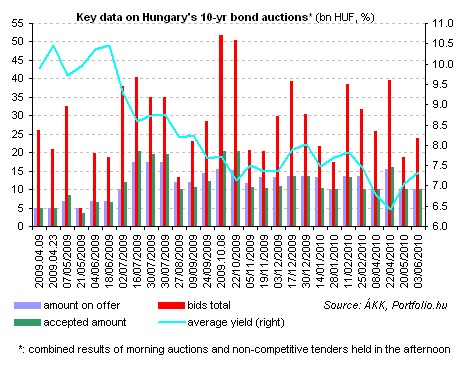