Just about everyone who follows Social Security looks at it on a multi-decade basis. The actuaries at the SSA look out 75 years. I take a completely different approach and only look at the short-term.

The US fiscal year is over. Social Security has published eleven months of data. They have provided sufficient information to come up with hard estimates for September. Some numbers:

2010 Fiscal Cash Flow = -$35b.
Payroll Tax Receipts minus Benefits Paid = -$22b.
Of interest is that $25b of the $35 cash deficit was a negative adjustment from prior years. There has been no additional information how this overstatement took place. In the scheme of Washington these days missing $25b is a not a big deal. The following graphs exclude the adjustment and therefore compare apples to apples. 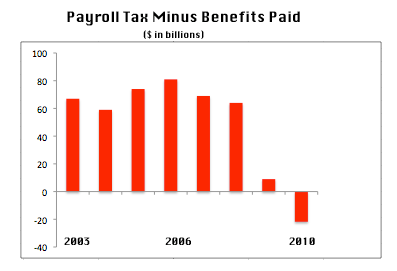 The two graphs look similar. That is because the PR receipts and the Benefits numbers far outweigh any of the other cash and non cash components of the SSA financial profile.

The critical measures of cash flow have turned negative. This is the first time in twenty-seven years that this has happened. Looking at these graphs it would seem obvious that SS has turned a corner in 2010. There is ample evidence that this turn to the negative will not be reversed. 2010 was the first year of a very long and slippery slope.

The Trust Fund (basically) agrees with my conclusions. Relying on overly optimistic expectations for GDP growth, inflation, job creation, wage increases and interest rates they have this as their “Intermediate” (Base case) projections: 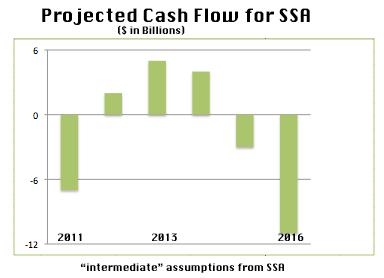 After 2016 it is all red. The projected cumulative cash loss comes to -$10b for the 2011-16 period. It is almost certain that even these lousy results will not be achieved. The SSA produces a High Cost set of projections. In my opinion we will see even worse than these bad numbers: 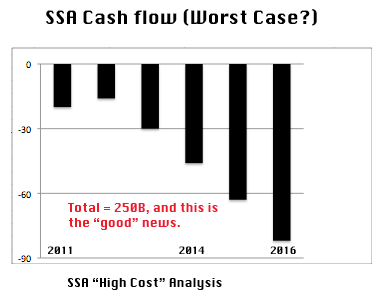 Recognizing the reality of a future of cash deficits the chief actuary of SSA, Stephen Goss, wrote a discussion paper that puts the issue of SSA and Perpetual Deficits squarely on the table. It is not an easy read, two cut and pastes on the cash flow issue that I thought were interesting:

the occurrence of a negative cash flow does not necessarily mean that the trust funds are moving toward exhaustion.

the program might well be in a position of having negative cash flow on a permanent basis.

On a purely academic basis Mr. Goss is correct. In the way that we think of debt the notion of Perpetual Deficits at SSA is not a problem. This flawed thinking is driven by an assumption that it does not matter how much Debt Held by the Public rises and or how quickly it rises.

The thinking by Mr. Goss that perpetual deficits are not of concern is a bit of the same thinking supporting Keynesian economics. The belief is that there are no restrictions on debt issuance. I am quick to admit that there is every bit of evidence that this is correct. There are no market-based limits on our debt issuance. At least there are none today. A final chart. This one looks at cash flow going back and forward. This significant swing in cash flow could not be happening at a worse time. 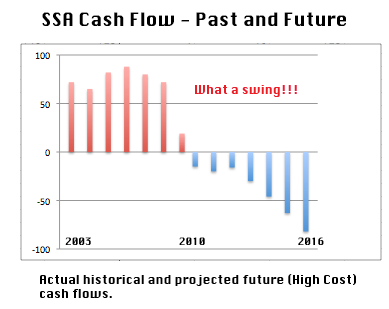 I am constantly reminded of how quickly sentiment turns these days. At some point the reality of perpetual deficits and monetization will come on the table. The academics are just going to hate it. 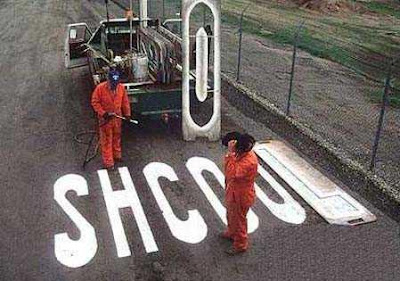