There is sufficient published information from the SSTF to make some observations for the first six months of 2010. The data on FICA/SECA tax receipts and benefit payments: (all amounts in $billions) 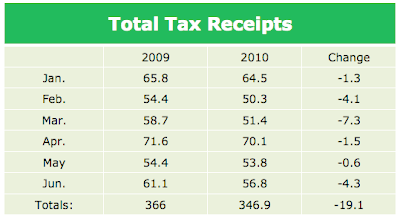 The numbers are going in the wrong direction. Receipts are down across the board while expenses keep rising. This chart looks at the Jan.-June results for 2008-2010. 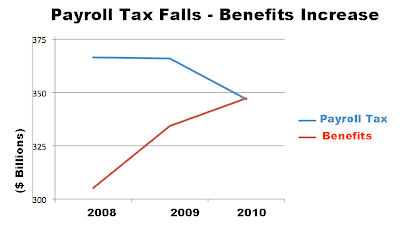 These lines were not expected to cross for at least another five years. This is the cost of the protracted recession and the failure of the economy to generate new jobs. The 2008-2009 increase in benefits was at a nosebleed level of 9.5%. That level has collapsed to 3.9% in the 2009-2010 period. This is the result of a “0%” COLA increase for 2010. The flip side is that those receiving checks are getting squeezed as their costs rise and income is stable. In the real world COLA is a joke. As this evolves it will just be a drag on consumption and extend the weak economy.

Most analysts, the CBO and the SSTF look at the Fund’s results in the context of a 75-year time horizon. Some point to a date in 2037 as a point where SS “may have problems”. I leave that discussion to others. It has been well proven that we can’t look two years into the future with any degree of accuracy. I prefer to look at the here and now and focus on cash flow. Consider the changes in the 2009-2010 semi annual period: 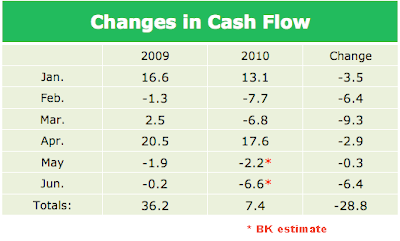 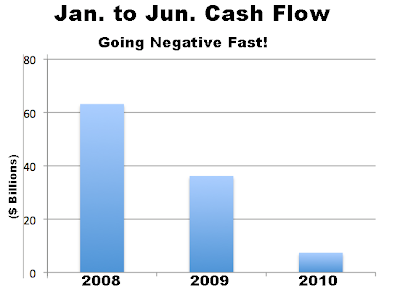 Cash flow has fallen from $63b to $7b from 2008 to 2010. One might take heart that the number for 2010 is still in the black. But that will not last long. The seasonality of the Fund produces big cash flow losses in the second half of a calendar year. For the full year 2009 the net cash flow was $3.4B. In other words the cash flow fell by $32 billion in the July-December in 2009. It is certain that cash will evaporate in 2010 as well. My number for the net cash flow drain in the second half of 2010 is $55b. This translates to a~$50b deficit for the full year.

My thoughts on the SSTF year to date results:

-I am stunned by the continued drop in FICA/SECA tax receipts. There are many metrics on the overall economy that have shown YoY improvement. The SS revenue numbers are telling us something different. They measure the incomes of 160 million workers. This is the broadest definition of employment we have. My read on the numbers is that we have very fundamental weakness in employment. The problem is bigger than the headline numbers from the BLS suggest.

-The payroll tax revenues versus the benefits paid number lines have crossed. Some, including the CBO, see this as a temporary phenomenon. I disagree. For there to be a return to a positive result of (payroll tax revenue – benefits) the economy would have to grow on a sustained basis at 5% and inflation would have to remain near zero. Those conditions are unlikely to be met.

-The estimated $50 billion of negative cash flow to be realized in the second half of the year is just more money that Treasury has to borrow. It does not, by itself, increase our total indebtedness. It is a shift between the Intergovernmental and Debt to Public accounts. Does an extra 50 Bil matter when the total the public holds is already 8.6 Tril? No, not really. Not as of today at least. But when the tables turn and the markets focus on the US bond/bill calendar it will make a difference.

-All heavily indebted borrowers, whether they be individuals, corporations or sovereigns are highly dependent on cash flow to service debt. When cash flow goes negative individuals and corporations go bankrupt. Most sovereigns do too. The US is in the enviable position of being able to ignore cash flow. We can simply print our way out of this problem. At least some people think we can.

-SS is $2.5T of the $4.5T Intergovernmental account. I believe that this entire group is going cash flow negative. The IG account cost us ~$160 billion in interest last year, but some out there are pretending the IG account does not exist. An example of this is in the following link.

This kind of thinking is not only lunacy; it is dangerous. 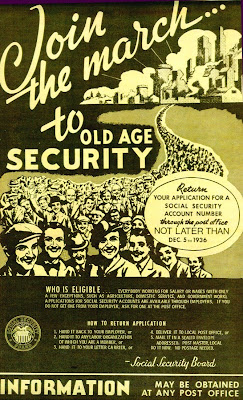