My very expensive Stihl “climbers” chainsaw won’t start. I yanked on it till my arm hurt and then threw it in the back of the truck. I toss in (the also expensive) back-pack blower that won’t start either. I go to the repair place. The guy in the back, behind the grease-stained counter has a grizzled look to him. He’s about 5’2”, 200 pounds, no hair to speak of and chewing an old, unlit cigar. He looks at me and my handful of machines and says, “What’s the matter, you can’t start em?”

I take this the wrong way and respond, “I’ve been starting these things for years. It ain’t me. It’s the damn machines!”

He eyes me and says, “Your problem is alcohol”.

Being pissed to begin with as a result of the sore arm, busted machines and wasted time this took me over the top and I snapped back, “My drinking has nothing do with the fucking machines!”

He takes a second, grins, and comes back with, “No, I meant the alcohol in the gas. That’s why the motors won’t start. I see a dozen just like em every week”.

So I shuffle and back-peddle a bit and listen while this guy explains to me that when alcohol exceeds 10% of regular gas it dissolves plastic engine parts. Things like fuel-lines or float gaskets in the carburetor. When the mixture is too rich the engine burns hot and wears out the rings. He explains that the legal limit is 10% but that all the fuel distributors cheat and mix in some extra alcohol so they can make a buck. When the mix gets to 15% it’s toxic for two cycle engines. And that is what killed my machines. He pulls off the gas line and shows me that it has deteriorated to the point where it has fused shut.

Armed with this new found underground information I go online to see if anyone else knows about this. Sure enough, it is all over the web. But what gave me a laugh was this article today: (Bloomberg link)

The premature introduction of mid-level ethanol blends (as a general purpose fuel) could result in unintended adverse impacts on the 250 million Americans who own and operate over 400 million motor vehicles, motorcycles, lawnmowers, chainsaws, recreational boats, ATVs, etc.

The EPA granted a request from ethanol producers, including Decatur, Illinois-based Archer Daniels Midland Co., to increase concentrations of the corn-based fuel additive in gasoline

This bit spells out the problem with alcohol and gas. The EPA has now proposed that all gas contain 15%. They want the subsidies for ethanol to be expanded. Along the way they are going to shorten the life of all the engines we use. Progress? Stupidity??

I’m thinking to myself that if the guy behind the greasy counter knows this, why don’t the bright folks in D.C.? Or do they know it and understand it, but they are doing it anyway because they have an axe to grind? Either way, it’s a sorry state of affairs. 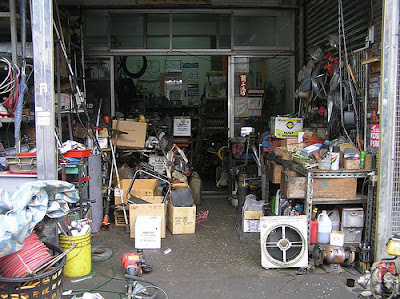