A few weeks ago I wrote about my conversation with a friend in Athens  (Link). At the time, he believed that the June 17 election would bring a different result than the May 6 election disaster - the catalyst for change being the fear of leaving the Euro. So far he has been proven right. So I called to get an update.

BK – It seems you might be right. The polls from Greece this weekend have given the European markets a lift today. Do you still believe that the centrist parties will win sufficient votes to form a coalition government and avoid a catastrophe?

Athens – Only a fucking idiot would invest money based on these polls.

BK – Are the polls not correct?

Athens – The European leaders have scared the Greeks with their talk about throwing Greece to the wolves. So yes, I think that the fringe on the extreme left and right will not get as many votes as they did on May 6. But Syriza (anti-bailout) has gained votes. The election is a complete crapshoot.

It may not matter. It’s not certain that Greece can make it to June 17 without a crisis.

Athens – There is no money left in Greece. In the first two weeks of June, the government and the banks will face a huge cash squeeze. Everyday more money leaves as depositors withdraw cash and transfer money out of the country.

It’s clear to everyone who lives here. Greeks are not stupid. Either exchange controls happen before the election, or they happen immediately after. The election will not change that either way.

BK – What do you mean by "exchange controls?"

Athens – A ban on money transfers out of the country. Limits on the amount of cash that can be withdrawn from a bank or ATM.

BK – What are the odds that this happens before June 17?

Athens – The election is now twenty days away. For Greece that is a very long time. If the Europeans wanted to send a message to Greece, they would stop the emergency lending. So I would say it's 50-50 that we see some measures before the election .

Last week there was a funny looking move in the EURCHF cross rate. 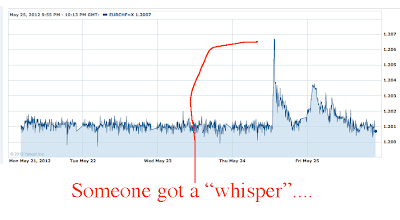 We now know that this blip was an insider who bailed on a short EURCHF position after getting a call that the head of the Swiss National Bank (SNB), Thomas Jordan, would soon be publicly talking about exchange controls in Switzerland. 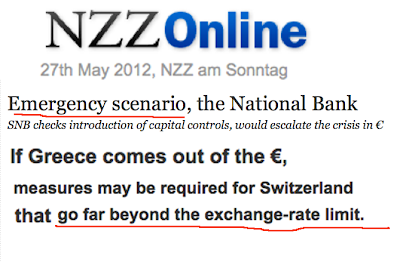 The move in the direction of exchange controls is not just a matter for the SNB. The entire government is behind the effort to ring-fence the country from its neighbor’s troubles.

This crisis group has the authority to do pretty much as it pleases. If it wanted to introduce exchange controls in Switzerland it could do it in an hour. I’m sure that a complete roadmap of policy actions has already been laid out. I’m also sure that benchmarks have been set that would trigger the introduction of exchange controls. Certainly one of those benchmarks would be if Greece establishes its own set of controls, or formally leaves the EU. We are very close on those triggers.

There is a very strong possibility that exchange controls are established in both the strongest and the weakest countries in Europe in less than a fortnight. If those two extremes establish capital barriers, the other countries of Europe will be forced to take similar actions in a matter of months.

Who will blink first? Will it be Switzerland or Greece that ignites the fires in Europe?  My guess is that Switzerland will force the issue onto the table. It will happen very soon.

I have no positions in the CHF crosses. I think you would be nuts if you did. Don’t let the flat lined graph of the EURCHF at 1.2012 fool you. There is a ton of two-way risk in that cross these days.

There are nearly 10m homeowners in Eastern Europe (Hungary, Poland, the Czech Republic, Romania and Croatia) who have a mortgage in CHF. I think those folks have something to worry about. What happens in the FX market over the next month or so is not clear, what will happen to the EURCHF rate in the next few years is a clear as it gets.