What a difference a year has made!  About this time last year, the dollar seemed on the brink of disaster amid the debt ceiling debate at U.S. Congress.  U.S. CDS spiked 430% in three months, and S&P downgraded the U.S. sovereign debt credit rating for the first time in history.  At the time, Euro crisis looked could be contained, and China's growth story was largely intact to still fuel the world GDP.  So it was of little surprise that the dollar collapse was ranked as the top global risk last year (See Table Below) by consultancy Oxford Analytica that could put the world into a tailspin.

Now, one year later, while conflicts within and with the Middle East region are still among the top global risks, the paradigm has definitively shifted to China and Europe (See Table and Chart Below). Among the top 10 global risks this year, we see 'Sharp Slowdown in China' as the most clear and present danger to the world.

With the simultaneous slowdown in U.S. and Europe, China has become a major market for business and corporations to rely on for revenue and growth.  However, economic data coming out of China has gone from bad to worse as Europe's crisis seriously hurt China's heavy export-reliant economy. Chinese manufacturing indexes slipped to 48.4 in June, a seven-month lows, as overseas orders dropped (See Chart Below), while Chinese Yuan also had its biggest quarterly decline in 7 years. 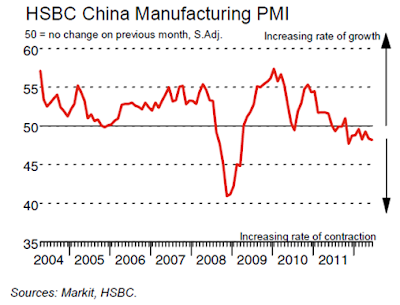 This current economic downshift in China has generated a long rippling effect on many countries and corporations around the world.  For example, China is a key growth market for Nike, and the company's shares suffered their biggest decline since December 2008 last Friday as profits declined due to slow demand in China.

With China's consumer price index rising only 3% YoY in May, the slowest in 17 months, some believe  Beijing may launch another stimulus program to stabilize growth.  But since China has bad inflation problem, and honestly, the country probably has run out of things to build after its massive 4-trillion-yuan stimulus package post 2008 financial crisis, small and incremental easing measures are most likely in the next 3 to 5 years.  The main concern for China is the lack of data and transparency as to the health of its regional banks, and local governments.  So assuming no major blowup, China most likely would still go through a cool-down period, which also means a few lean years ahead for the rest of the world.

Within the past year or so, Euro crisis has evolved into a full-blown sovereign debt crisis that could potentially cause yet another global banking and economic chaos.  In contrast, since the U.S. is the first wave of the 2008 financial crisis, America is largely on the mend, albeit at a snail's pace.  However, with stubbornly high unemployment rate and low job creation dragging down consumer sentiment and spending, 'U.S. Deflationary Trap' as emerged as the No. 9 global risk.  But for now, we see a cycle of slow or no growth as a more likely scenario for the U.S., rather than a prolonged 'deflation trap'.

Investor's funds flow out of Europe and risky assets seeking the safety of U.S. Treasury has propped up the Dollar, while keeping the U.S. borrowing cost low, despite Fed's two rounds of quantitative easing and national debt topping the $15-trillion mark.  Nevertheless, the latest CBO report estimates that the U.S. public debt could reach 200% GDP in 25 years if current tax and spending policies are extended.  By comparison, the essentially bankrupt Greece debt load is forecast to just top 160% this year.  And don't forget, the debt ceiling debate could take place again this year.  That suggests it could be just a matter of time that dollar demise would top the global risk chart again.