Time to Get Real?

Time to Get Real? 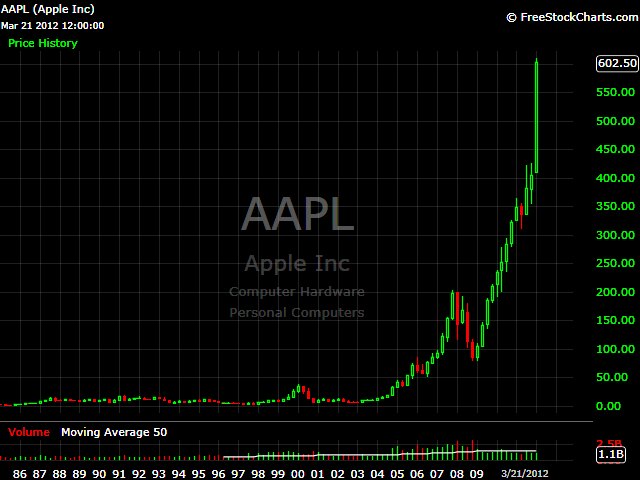 Do you REALLY think this will go on forever?

On the right is the AAPL quarterly chart but it could also be the quarterly chart of SHLD, NFLX, FOSL, STX or PCLN (Bespoke Chart), all of which are up more than AAPL (which is up 50%) in 2012.

We've discussed PCLN as one of my favorite shorts and we had a good discussion in Member chat last night comparing PCLN to EXPE, which drops the same amount of cash to the bottom line (before buybacks and dividends) but has just 1/8th of the market cap of PCLN.

Sure you can say that PCLN is twice as good as EXPE (it isn't, but you can say it). But can you say it's 4 times as good? How about 8 times? EXPE nets $500M a year - 8 times that is $4Bn - more money than the entire travel sector makes!  How, exactly, will PCLN grow into that valuation?  Eliminate all competition and then grow the sector by 50%?

Yes, that's pretty much what AAPL did but how many AAPLs can you have in one market? 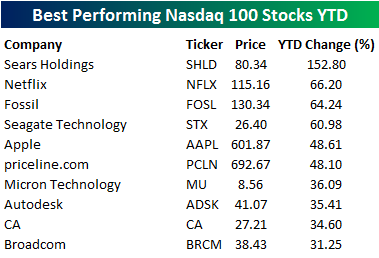 THAT is the problem, my friends. Aside from the macro concerns we discussed in yesterday's post, we have a sort of value mania that is driven by the very real success of one company, much the way we had a dot com boom in the late 90s driven by the very real success of just a few companies. Back then, everyone was the next QCOM, YHOO, MSFT, CSCO - whichever category you were supposed to be the best.  Qualcomm, in fact, was the best performing tech stock of 1999, gaining 2,619% that year and finishing right about $100. By the end of July, 2002, it was trading at $10, but hey, what a ride!

In fact, here's the CNet story from Dec 29th, 1999 titled "Qualcomm Jumps on $1,000 Price Target" and coming on the heels of "Qualcomm to offer Net2Phone services in Eudora."  It's no wonder people were super-excited!  AMZN was "only" up 25% that year to $100 but Jeff Bezos was Time's Man of the Year and yes, its business has been growing at an amazing rate for the past 12 years and it has crushed its competition and dominated the sector - and gained less than 6% a year for their troubles.

The two worst performers of 1999 were IM, which dropped 63% to $10 but is up 80% since then, and XRX, which fell 62% to $20 and never did recover. Long-Term, the market doesn't know a thing!  In the short-run, we can play PCLN, FOSL, NFLX or the CMG but don't delude yourself that these are long-term investments - that's how fortunes get lost...

The bull case is all about recovery, which we're just not seeing on a Global basis (and even the US is debatable) and INFLATION.

Inflation I consider a good reason to bet AAPL can go to $1,000 - because $1,000 is how much a new IPhone will cost once inflation takes hold and it's very likely it will take hold as the supply of money, world-wide, is through the roof - up over 100% since 2007.

The problem is that money is not moving (no velocity) so the economy is not growing.  Until we see the money move through the broad economy (wage increases, interest rates rising), we're not going to have inflation that sticks because the consumer is out of money.

How will PCLN (now $704) take over the entire travel sector AND increase sector revenues and profits by 50% if the consumer is out of money?  That's why PCLN strikes me as particularly vulnerable - it depends on the bottom 90% traveling and the company has been benefiting from a recovery in top 10% travel and higher airfares but, like gas prices - we are hitting a wall at how much money the average consumer can afford to pay.  We're already seeing drastic cutbacks in fuel consumption (see yesterday's post) and David Rosenberg postulates that the only thing that saved the economy in January and February this year was a mild winter - now that we hit driving season, where is $80 per tank going to come from?

In my Morning Alert to Members yesterday, I put up an aggressive DDM ($69.66) spread for playing the Dow if it ever gets back over 13,200, playing it to hold that line through May for 500-1,000% gains.  Nearer the close, we were discussing what to do if inflation does kick in and I laid out another way we can play the Dow over 13,200, looking for another 50% move in the Dow over the next two years:

This is a point I keep trying to make - if we are, in fact, heading into a 1998-1999 style rally, we're not going to miss very much by failing to participate in the initial break-out.  If you missed the first doubling of BRCM in 1999, it was OK, as it doubled 5 more times by the end of the year. YHOO went up 4x in 6 months AFTER it doubled at the beginning of the year (now 1/10th of where it was). IF the rally is real, IF the Global recovery is real - then we will see broad, deep participation and will have many, many opportunities to get more bullish. But, if it's all an illusion and about to blow up in our faces, then Cash will be King - and that is how I prefer to play it at the moment.

We had our usual fun shorting oil yesterday (and this morning) as we got not one but two spikes to $107.50 that we caught for nice short moves in Member Chat and now (9:15 am), we're getting a very nice move down to our $105 target so congrats to all the players and a big thank you to all the evil bastards who tried to manipulate the NYMEX yesterday and gave us a perfect entry at the top! My commentary to Members is noted on the chart to the left.

We're also getting a winner off my Russell call this morning as that index is already down to 816 in the Futures but nowhere near as exciting as oil, which is down to $104.79 - as I am writing this and just ahead of the bell.

Will this be the beginning of the big sell-off I predicted on March 5th? After being wrong for two weeks - it's way too early to declare victory based on a one-day pullback and I am still trying to get into that bullish mindframe and will be more so if our technicals hold up on this pullback but, meanwhile, I still see many, many reasons to stay cashy and cautious at the moment.

CLICK ON THIS LINK TO SAMPLE THIS WEEK'S NEWSLETTER.