There was a mini flash crash in the EURCHF cross this morning. Two charts on the price move: (Link and Link) 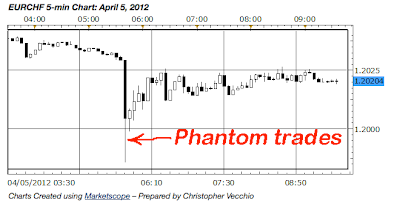 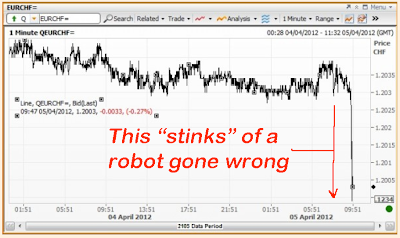 I was watching markets on a screen. When I saw the EURCHF price break I called a lady I know on an FX desk. She picked up the phone after a few seconds and yelled at me:

“FX Bank is prepared to buy Euros and sell Swiss Francs at 1.2016 currently. There is no breach of the CHF peg at this time. It was just some computers gunning stop losses. Nothing to worry about. Please excuse me, as I have to take another call. Have a nice day!"

The price break took place in under a minute; it might have been for just a few seconds. There are some reports that the Swiss National Bank (SNB) actual bought some Euros during the fray. I’m not sure that is true. If it did happen, then the SNB bought them from a computer, and the computer lost money.

What happened this A.M. shows that the EURCHF market is wound tight. It could uncoil quickly. I have no doubt that the SNB has resting orders in the capital markets for buying up to 10 billion EURCHF. I also don’t doubt their resolve to do more. But nine hours after the mini crash the EURCHF is sitting at 1.2021, a measly 0.17% away from the SNB wall. That’s too close for comfort. Something has to give. Another bad day in the Spanish bond market might do it.

If we see a headline in the next few days that the SNB was forced to actively defend the peg, and in the process absorbed tens of billions of Euros, it will be very unsettling across all markets. It would be a sign of financial desperation; the ultimate “risk off” move.

I don’t think it’s possible for the EURCHF to trade so close to the peg without some accident happening that could start the hot money rolling. Either we drift back up to the "safer" mid 1.20’s, or we're going to have an Intervention Party. This might sort itself out by the weekend. One thing is certain, the US VIX is not priced for a hard landing of the EURCHF. 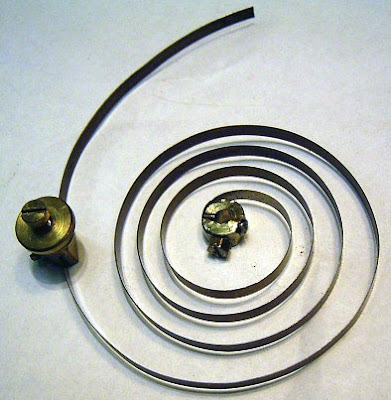