A Visual Tour of the Fuel Pools of Fukushima

You already know that Fukushima’s fuel pool number 4 may be the single greatest threat, but that pool number 3 is very dangerous as well.

The pools at each reactor are thought to have contained the following amounts of spent fuel, according to The Mainichi Daily News:

You’ve learned that unit 3′s reactor was the only one at Fukushima which burned plutonium. As Japan Times notes:

No. 3 reactor is the only one at the crippled power station that was powered by the plutonium-uranium MOX

You’ve gotten the fact that – if the water drains out for any reason – it will cause a fire in the fuel rods, as the zirconium metal jacket on the outside of the fuel rods could very well catch fire within hours or days after being exposed to air. See this, this, this and this. (And that even a large solar flare could knock out the water-circulation systemsfor the pools.)

You’ve listened to experts say that – unless the rods are removed from the fuel pools before a major earthquake strikes (using special equipment which keeps the rods submerged in water the whole time) – they will likely catch fire and release huge amounts of radioactivity. See this and this – starting at 4 minutes into the video.

You’ve read that – after reviewing photos from several different angles – the Nuclear Regulatory Commission’s initial impressions were that spent fuel pool number 3 might not be there at all, and that nuclear engineer Arnie Gundersen said a couple of days ago:

Unit 3 is worse [than No. 4]. It’s mechanically its rubble, the pool is rubble. It’s got less fuel in it. It faces the same problem. Structurally the pool has been dramatically weakened. And, god nobody has even gotten near it yet.

And you may caught the recent headline that a 35-ton machine fell into spent fuel pool 3. As Kyodo News reports:

The operator of the crippled Fukushima Daiichi nuclear power plant on Friday found that a 35-ton machine had dropped inside the spent fuel pool of the No. 3 unit, possibly because of a hydrogen explosion that occurred in the early stage of plant’s nuclear accident last year.

Tokyo Electric Power Co., commonly known as TEPCO, reported the finding after placing a camera inside the water-filled pool the same day to prepare for removing, as part of the decommissioning process, the nuclear fuel stored there.

One photo showed part of the machine, originally located above the pool and used to insert and remove fuel, appeared to have dropped onto the nuclear fuel storage racks.

But – until you see pictures – it is hard to get a sense of what all this means.

Here’s a picture just released by Tepco of the giant machine in the fuel pool :

And another new Tepco photo showing other tangled wreckage inside the pool:

The following graphics from Ashai news show how the crane is normally used to move spent fuel rods in and out of the pool. Here’s the crane bringing in a special container to hold the rods:

The crane then lifts the rod-carrying container up:

And then away from the pool:

Keep in mind that the machine which fell into pool number 3 was part of the crane “used to insert and remove fuel”, and so now there is no easy way to remove the fuel from the fuel pool. And the crane at unit 4 is also broken:

Let’s look at some more pictures …

Here is where the fuel pools are located in the Fukushima reactors: 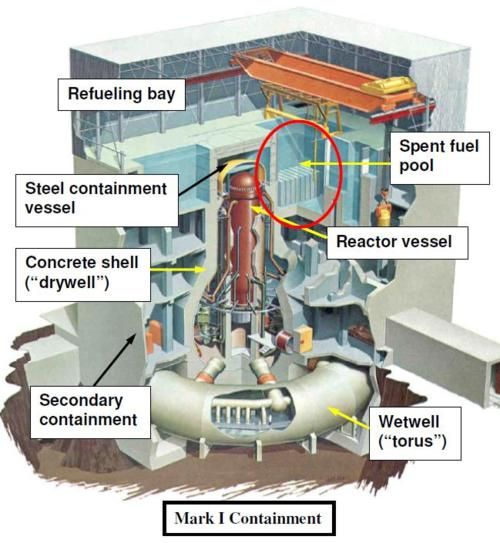 Here are pictures Unit 3′s fuel pool before the earthquake, and the fuel pool crane: This shot is during repairs at reactor 4 before the earthquake – but gives a sense of scale: Here is the green fuel pool crane at unit 4 after the earthquake:

The view from above the crane at fuel pool 4:

(“SFP” in these photos refers to the spent fuel pool.)

Former fuel pool nuclear engineer Arnie Gundersen notes that – for at least some period after the earthquake – the fuel pool had insufficient water, and the nuclear rods were sticking out into the air:

Here is water later being poured into fuel pool 4: 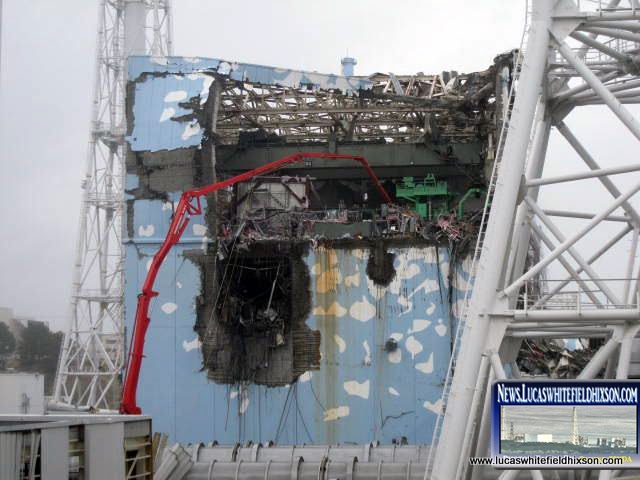 Reactor 3 is a mess:

HouseofOust notes of this picture:

Oval is the reactor well location. Lines on the left side of the image outline the crane that seems to have fallen over or been crushed. Spent fuel pool outlined in the foreground.

And of this picture:

Perspective lines are drawn to show where the deck should be and how much is gone. A circle shows the beam apex to appoximate the reactor well. Spent fuel pool is again seen off to the right and outlined. Marked structure in the foreground is the end of the refueling crane.

Now can you see what’s going on?