Gold Bubble? “More People That Own Apple Stock Than Gold”

Gold is down 1.6% on the week. The gold market has seen peculiar, lack lustre, low volume trading this week punctuated with sudden, oddly timed, very large sell orders. This leads to quick price falls followed either by slow, gradual recovery or a sharp bounce, prior to next bout of strangely timed sudden large sell orders.

This was clearly seen by the mysterious and massive $1.24 billion ‘Goldfinger’ trade on Monday.

While the $1.24 billion trade on Monday was attributed to a “fat finger” or algo trading in the gold market, there was a similar spike in volume at exactly the same time in silver – while all other markets saw little price movements.

There have been a few instances of this and it was seen yesterday again around 1330 GMT when there was a large 3,000 plus lot gold sell order which saw the price quickly fall by over $5 before a rapid recovery. Volume that size is unusual for that time of the day on the COMEX.

Yesterday the silver pits again suddenly saw the sale of some 200,000 lots in a minute or two that knocked the most-active SI future back a few cents (see chart below) and this led to silver breaching the $30/oz mark later in the session.

It is unusual to see a market building momentum in a certain direction and then to see massive sell orders in both the gold and silver market which then lead to further tech selling which can feed on itself.

At the same time there appear to be eager buyers at these levels who continue to accumulate on the dips. Ultimately prices will be dictated not by strange and potentially manipulative trading on the COMEX but by the global supply and demand of physical bullion. 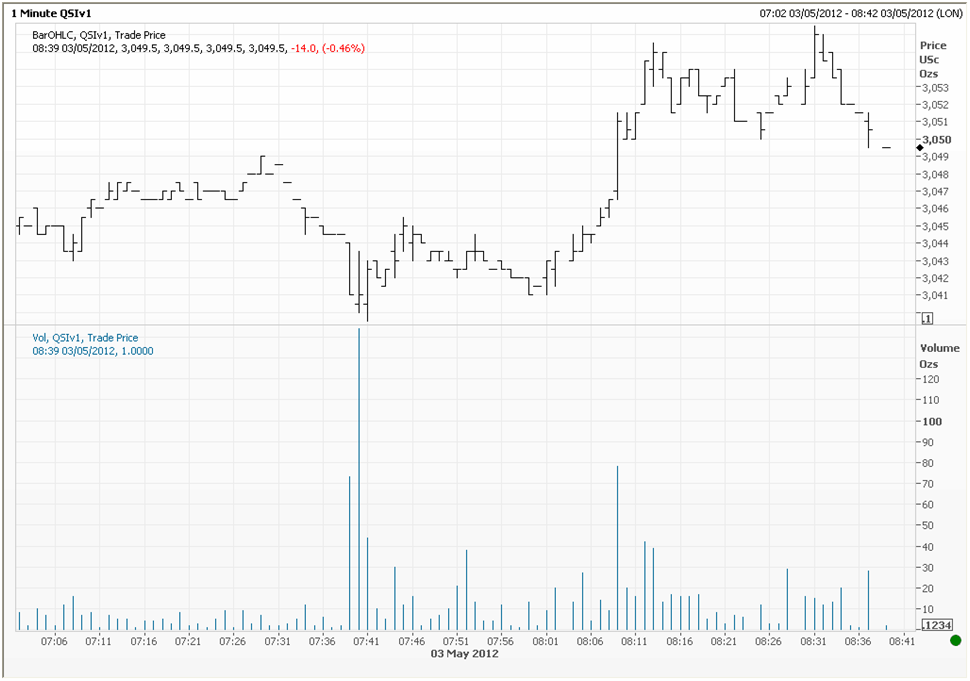 Gold’s weakness may also be due to short correlations with equity markets – which have come off due to investor jitters after recent poor data and ahead of the US payrolls report.

Market expectations for Friday's non-farm payrolls report have fallen this week, with dealers now expecting that the economy added 125,000 to 150,000 jobs in April, below the previous Reuters consensus forecast of 170,000. Investors are expecting more lacklustre job growth last month following a trail of weak U.S. indicators.

A poor jobs number should lead to gold moving higher as it will lead to concerns about the US economy and concerns that QE3 will be launched leading to the further debasement of the dollar.

The European Central Bank kept rates steady at 1% as expected by market watchers.  The euro faces additional risks on Sunday from elections in France and Greece which could create further disruption in the Eurozone about their countries commitment to fiscal austerity.

Euro gold is consolidating between €1,150/oz and €1,400/oz (see chart below). Given the terrible economic mess that Europe finds itself in, it seems only a matter of time before gold reaches €1,400/oz again and there is of course the risk of the euro falling by much more against gold.

Gold a Bubble? “More People That Own Apple Stock Than Gold”
Respected investment fund manager and author of the 'Gloom, Boom & Doom Report' has advised buying gold again and says that 25% of a portfolio should be in precious metals.

He says another move to the downside of gold is possible, but worldwide printing of money assures long term support.

Interviewed at his residence in Hong Kong by Hard Asset Investor, Faber made the excellent point that the majority of the investment public continues not to own gold. Especially, when compared to say one popular tech stock - such as Apple.

Faber said that he attends lots of conferences and usually asks the audience, “How many of you own gold?” Normally, hardly anyone owns it. I’ve been to conferences with thousands of people attending, and nobody owned any physical gold.”

Faber believes that this shows that gold is not a bubble.

“When you went to an investment conference in 1989, everybody owned Japanese stocks. And in 2000, everybody owned tech stocks. That is the bubble, when the majority of market participants own an asset. I think there are more people that own Apple stock than gold.”

Faber points out that while the price of gold has risen by quite a lot in the last 13 years (from $252/oz in 1999), the debt situation of the western world has deteriorated dramatically.

“People say the price of gold is in a bubble stage and it is up substantially from the lows in 1999, which was, at the time, around $252 per ounce. But at the same time, we had an explosion of debt, not just government debt, but private sector debt, and an explosion of unfunded liabilities such as in the pension fund industry, and not just with Medicare, Social Security and Medicaid.”

“So now, 12 years after the gold’s low, we are essentially in a situation where maybe the price of gold should be much higher because the economic and financial conditions are worse than they were 12 years ago.”

For breaking news and commentary on financial markets and gold, follow us onTwitter.