Living the California debt based dream – Bankruptcies in California increased 557%

The California housing market sits in an odd stage of limbo. You can see that the public for the most part is fully aware of the situation like an Alamo standoff in real estate. People fully acknowledge now that banks are holding off a tremendous amount of inventory. There is little that is secretive about the shadow inventory at this point. Yet with all the distressed properties, people are looking at artificially low rates and are wondering if this is the time to buy (assuming they are not one of the 20+ percent that are underemployed). Adjustable rate mortgage use is at all-time lows and why would you not go with a fixed rate given the insanely low rates? Yet the market and economy is not healthy. Mortgage rates and low inventory would be signs of a healthy market in other times but the opposite is the case. What does this mean for housing going forward?

Low use of adjustable rate mortgages

The use of adjustable rate mortgage is at all-time lows: 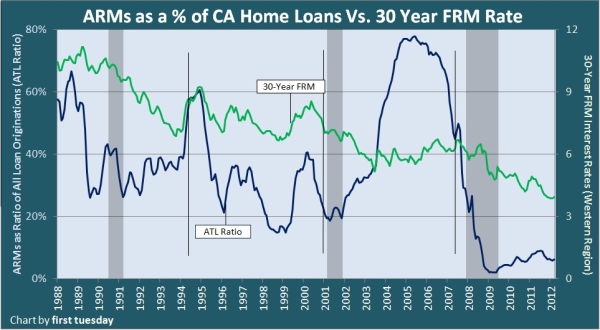 The use of ARMs is practically non-existent when at the peak it was nearly reaching 80 percent of all loan originations. This is the Alt-A and option ARM universe that we once inhabited. The low usage of ARMs might be obvious on the surface but I think it tells us more about the market. Some ARMs currently have incredibly low rates (yet many go under conventional underwriting standards requiring a larger down payment). The argument coming from some is that mortgage rates will remain low for a very long time similar to what Japan has experienced. If this is the case, then wouldn’t you think that going for an ARM with a 1 to 2 percent cut in APR would make sense? My take from this is that the public doesn’t believe that the Fed can keep this artificially low rate going for a long-time so grab those fixed rates while you can. Take a look at all the bailouts and actions the Fed has had to do to keep rates low: 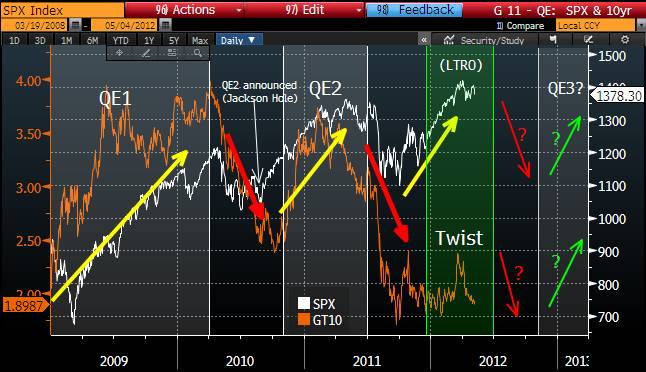 In other words, the Fed has had to become incredibly active and become even more aggressive just to keep rate at where they stand today. The low usage of ARMs reflects the notion that this is the rock bottom for interest rates and people need to lock in before something happens. Yet the bigger question is, what is happening? The economy is still facing tough challenges ahead. State and Federal governments will get a piece of their pie. Even if you look at some places in Orange County with high HOAs and Mello-Roos the fees are already starting to add up in non-mortgage related items.

The state of the California economy

Everything would seem to favor a booming housing market but that is not happening. You essentially have a sub-group of folks with equity in their homes trying to trade to one another and first time buyers trying to scrape together enough for that 3.5 percent down payment FHA insured loan. This is a reflection of a poor economy more than a healthy one. Take a look at bankruptcies in the state: 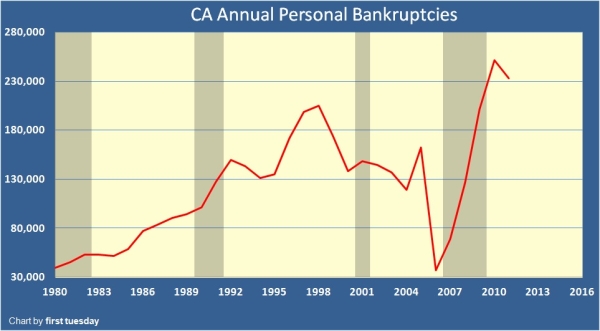 Keep in mind that the falloff in 2006 hit because of the rush to file in 2005 before bankruptcy law became tougher and more difficult to process. We are very much near peak levels under these new stringent requirements. In 2006 we were closer to 35,000 bankruptcy filings while last year we hit 230,000 (an increase of 557%). What this dramatic change signifies is that the underlying economy is still very weak and many people are unable to meet their current debts. A large part of this is driven by housing debt via mortgages or HELOCs or other forms of debt based spending. Keep in mind over 30 percent of California mortgage holders are currently underwater owing more on their home than it is currently worth. Again the question remains, who can pay for these homes with a poor economy? The major growth group in the state is from baby boomers: 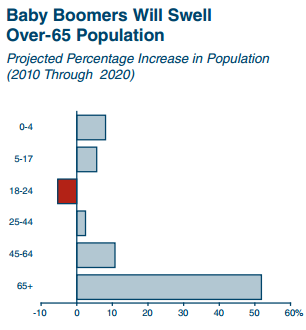 You have an aging population that essentially can sell to one another and transfer equity to each other and a much less affluent younger population that is mired in other forms of debt including student debt. The above chart highlights where the growth will be. People form households in the 25 to 44 age range and you see growth in this segment is not exactly dramatic. Household incomes are flat for over a decade: 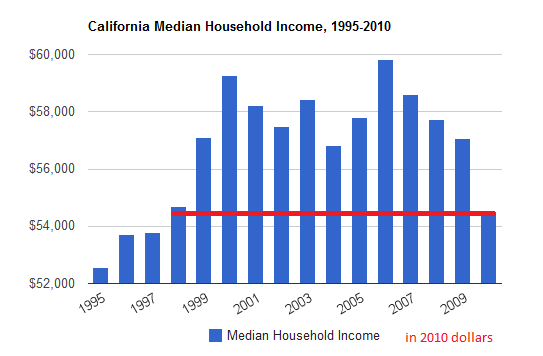 Moving forward this is very important. The leverage being afforded to the current market is driven by a few artificial items:

-Federal Reserve market actions as shown by a previous chart (risk of market disruptions become larger when confidence starts breaking) -FHA insured loans requiring very little down (this is getting more expensive with default rates) -Controlled shadow inventory by banks artificially restricting supply. This is artificial because accounting standards and bailouts were essentially developed to change the way banks did business at the expense of the public.

The public now largely realizes that banks are operating in a pseudo-market and prime properties are being allocated even before they hit the MLS. I’ve gotten a few e-mails from folks seeing some interesting action in the short sale process especially when it comes to more prime properties. Again, this is not a “free market” but one that is being carefully managed. Yet you need to ask to what end? The real economy doesn’t seem to be producing the jobs to sustain current prices. This November taxes will be on the table. When money is running short and employment opportunities seem limited you can expect the unexpected. Those that think housing is balancing itself out on its own need to look at that Fed chart again and examine FHA insured loan default rates.