Since 2009 all cash buyers have purchased roughly one third of all Southern California home sales. This is a significant number and unlike the early 2000s, many of these buyers are looking to hold onto properties as rentals. A good portion of buying has come from larger hedge funds and an increase of foreign money has caused competition on an already low selection of homes to become more pronounced. The latest inventory report for California is telling in many ways. Many of the larger metro areas in California are seeing annual inventory drops of 50 to 70 percent. Those looking to buy are facing added competition from a variety of unlikely sources. Last year in February we set a record with the number of homes sold to absentee buyers (29.9 percent). Where is all the inventory going in California?

One of the more telling stories is the large decline in housing inventory available for sale. The trend is apparent nationwide but more pronounced in California:

If you are out in the market to buy a home and are wondering why your selection is limited, look at the above. If you were looking to buy in Sacramento, you had a 71 percent drop in inventory from the previous year. San Francisco saw a major 68 percent decline. Los Angeles came in at 61 percent. These are all nearly twice as high as the nationwide inventory drop of 33 percent.

Is this growth coming from employment growth? We’ve been adding some of the jobs that have been lost: 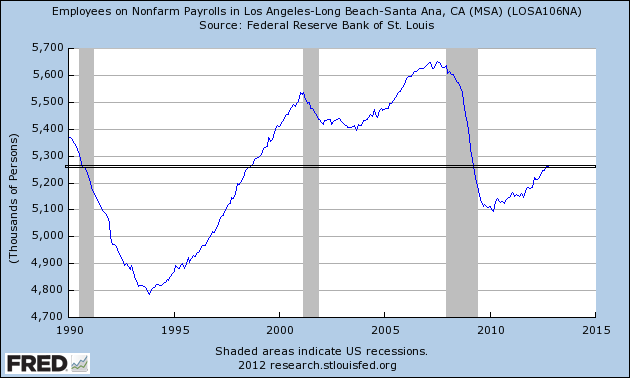 We had more people working in the LA/OC area back in the early 1990s than we do today. The drop in inventory is a unique one and also one that reflects the management of shadow inventory from the banks. The perception in the market is that inventory is running out and many people have the first California housing mania etched into their memory. Last year saw a big push from those sitting on the fence. This is why we are now experiencing this:

“(PSN) Real estate agent Alan Castillo recently listed a client's fixer-upper in Granada Hills for $278,250. It was only 1,600 square feet -- but it drew 128 offers, most of them in cash. The final selling price, after all of 10 days on the market? $377,872. "I was very surprised," said Castillo, the owner of Financing Realty Center Inc. in Granada Hills, who has been in the business for 20 years. "I didn't think I'd get that many offers. This was overwhelming."

A fixer-upper listed in Granada Hills for $278,250 ended up selling for $377,872 after 128 offers came and sold in 10 days. Many areas of California are now seeing signs of a second housing bubble. We’ve documented many cases of flippers in hipster areas putting in a little HGTV work and then selling the home in a matter of days for hundreds of thousands of dollars more. What is causing this market to inflate again? The culprits remain the same: incredibly low inventory, record low interest rates, bank management of shadow inventory, foreign money, hedge funds, and flippers. It is true that sales have increased but in reality, the surge in prices is coming more from the massive drop in inventory and low interest rate leverage: 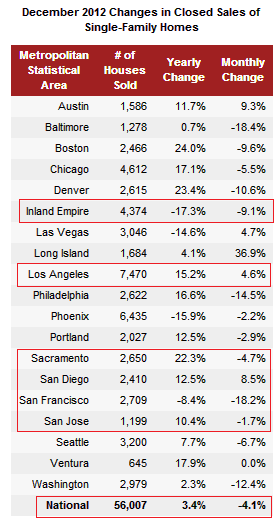 For example, home sales in the Inland Empire fell by 14 percent year-over-year but inventory fell by 57 percent. San Francisco saw home sales drop by 8 percent year over year but inventory fell by over 60 percent. In other words the push up in prices is happening because of a massively small amount of inventory being combined with all the other forces of low rates, investors, and banks controlling distressed properties. In other words, the market is completely manipulated. I’ve seen some people arguing that we had a surge in population but that is not a reason either:

In fact, Los Angeles County for example saw its first annual population decline since the 1990s prior to this recession hitting. This was the slowest growth in population dating back to the 1970s. Population growth is back but at a more modest pace. Certainly this is not the reason for the current major push.

The drop in inventory is incredible and is the largest I have ever seen. The increase in sales is not so dramatic but with scant inventory available, for those seeking to buy a home right now conditions are extremely competitive.

What is interesting that a leading indicator in future changes is when home sales begin to decline. Take a look at areas that are seeing annual sales drop:

These areas are massive hubs of speculation from investors. For Las Vegas and Phoenix roughly 40 to 50 percent of all sales over the last few years came from investors. What happens when prices get so high that they are no longer attractive as rentals or to flip? What happens when the large pool of uncommitted money takes off? Keep in mind that for investors, they need families to eventually buy or rent these places. At a certain point, you need the real economy to make up the slack and incomes need to rise in proportion. This drop in inventory is stunning since very few organic homes are coming on the market. In California, you have many underwater homeowners and also, many that took out HELOCs and home equity loans that wouldn’t be able to sell in this current market even after the current surge in home prices.

Home prices are still off by 36 percent from the peak in the LA/OC area: 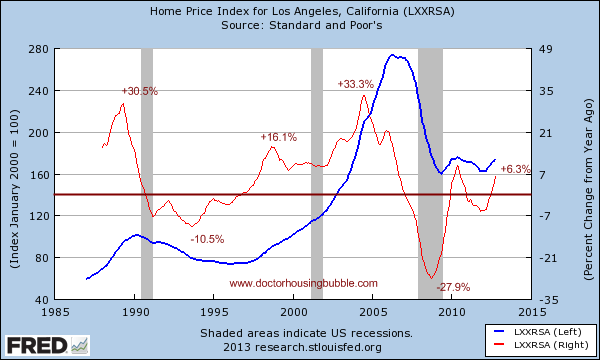 If you are looking to buy, gear up for low inventory, bidding wars, flippers, and investors. Any stories from prospective buyers dealing with low inventory?