Gold is marginally higher today but remains near the lowest level in four weeks, as a liquidity driven rally in stocks and investor caution over the Federal Reserve’s monetary policy is contributing to a nervous gold market.

Fed Chairman Ben Bernanke said last month the bank could scale back its $85 billion monthly bond purchases if the U.S. economy strengthens, but a lack of clarity on the timing has unsettled markets. A policy statement from the central bank will be released today after its meeting.

Expectations are that the Fed may scale back its extremely unusual $85 billion per month debt monetisation programme to $60 billion a month and continue with near zero interest rates.

Both of which would be bullish for gold.

It would be very bearish for gold and silver if Bernanke was to indicate that bond buying would be phased out completely and interest rates allowed to rise to historic norms. However, given the very fragile nature of the US recovery, a return to conventional monetary policies is not going to happen any time soon.

The US economy remains massively indebted and the fiscal situation sees little sign of improving. Many states are on the verge of bankruptcy.

This is leading to continuing very robust physical demand from investors and store of value buyers internationally and in the U.S.

This demand can be seen in the lack of liquidations in the silver ETFs by investors and speculators, and by continuing store of wealth demand for silver coins and bars. 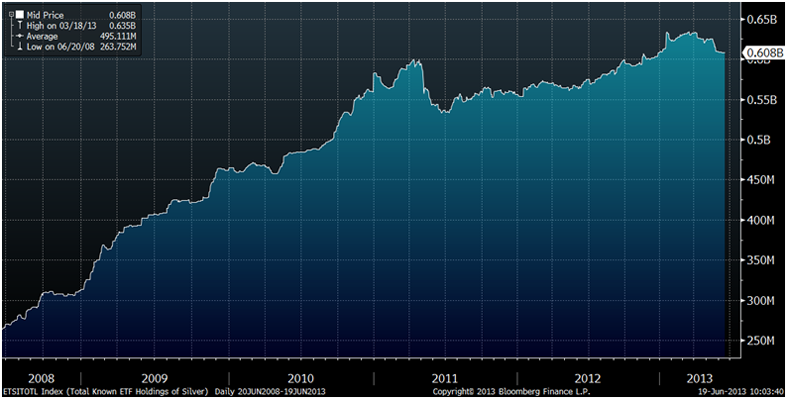 CME is catering for the demand by introducing a 1,000 ounce physical silver futures contract “due to demand from customers”.

“The smaller size will provide market participants with greater flexibility to manage their silver price risk, and serve as a more cost-effective tool for individual investors or others looking to hedge against economic uncertainty.”

The CME said it is deliverable against existing benchmark silver futures contracts.

Sales of silver coins by the U.S. Mint have set a record high in the first half of 2013 seeing the best start to a year ever. Silver bullion coins were first offered in 1986.

Falling prices and concerns about being able to take delivery of coins amid continuing concerns about the US economy and currency debasement have led to the record demand.

Demand remains at an “unprecedented level,” and sales of gold and silver coins may reach an annual record this year, Richard Peterson, the acting director of the mint, said on June 5.

Silver coin sales were suspended in January for more than a week because of a lack of silver inventory. In April, purchases more than doubled from a year earlier after prices tumbled 16% in two days due to unusually aggressive selling on the futures market.

Silver futures have declined 28% this year in New York, the biggest loss among the 24 commodities tracked by the Standard & Poor’s GSCI Spot Index but the smart money is continuing to accumulate on the dip.

The death of the gold and silver bull markets is greatly exaggerated as seen in the still very robust physical demand from investors and store of value buyers internationally including the U.S.

Bull markets do not end in a period of sustained record physical demand nearly two years after prices have “peaked”.

This strongly suggests that silver’s bull market is far from over. Silver has gone from being massively undervalued in the early 2000’s to being fairly valued today. Bull markets end in speculative manias with mass participation by the public and blow off tops where prices become massively overvalued as seen in 1980. 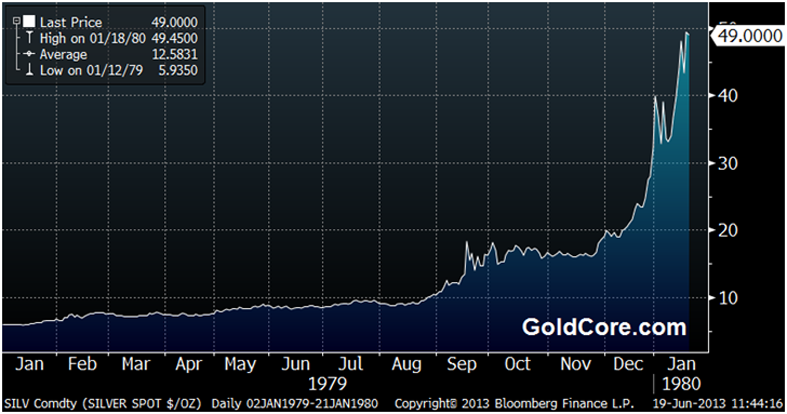 This has not happened with silver yet. Most of the public does not even know the price of an ounce of silver, let alone its value and how to own it. Silver remains gold’s very poor cousin and gets little or no media attention.

Silver’s inflation adjusted high was $130/oz and we continue to see that as a realistic long term price target. Given silver’s volatility, dollar, pound or euro cost averaging into position remains prudent.

Similarly, when prices have had a parabolic gain - dollar, pound or euro cost averaging out of a position will be prudent as it will be nigh impossible to time the top.

Sign up for our free daily market update on www.goldcore.com