The late 20th century was a jam-packed time for stock-market crashes that would change, shape and alter our lives in so many ways. We had gone through the post-war period and there was heightened wealth in western economies. People were asking for greater recognition and wealth was being distributed and redistributed in the construction of a new world that was supposed to be better and safer. Groups that had until then been largely left unrecognized were now asking to partake in that wealthy society that was being constructed. Women gained even more rights, kids where no longer treated like babies, minority groups were given greater equality.

Consumerism had been born and it changed our outlook on the world. The world had been through great recessions and had suffered enormous losses due to World War II. The United Nations had been set up in 1945 leading to greater cooperation between countries. We would turn into capitalist countries, in true proof of the ‘Golden-Arches Theory’ (i.e. countries that have McDonald’s restaurants), referring to the theory developed by Thomas L. Friedman in 1999, stating that those countries are more likely to avoid war with each other and do business to maintain their wealth. Countries that are rich enough to have developed a middle class (meaning greater wealth distribution, in general) are less likely to put that in danger by going to war with another country that is also a ‘McDonald’s country’. But, it doesn’t stop them waging war on these countries, with whom they won’t necessarily trade, anyhow.

The Bretton Woods system had been established fixing rules and regulations among the world’s industrial and economic actors with regard to commercial and financial exchange. It meant the setting up of the International Monetary Fund and also the International Bank for Reconstruction and Development. Money was tied to the US Dollar, by monetary policies that maintained exchange rates between those currencies. It was the period of postwar expansion and economic boom, the Golden Age of Capitalism, lasting around thirty years. The thirty glorious years of the post-war world of capitalism, which came to an end in the 1970s with the oil crises and the Bretton Woods system collapsing.

The 1970s saw the onset of economically-troubled times and the consequences of all of the decisions that had been taken before.

The world became computerized, virtual, distant and yet local at the same time. We were no longer held back and could go anywhere and do anything (or at least we believed that we could). We could even go to the Moon and back. But, our interconnectedness, the fact that we had made the world a smaller place meant that we were to all intents and purposes living in each other’s’ pockets. The age of cascading failure had also been born. We were such a system of interconnectedness that failure in one place triggered failure in successive places, and there was no way of getting out of that. The end of the Golden Age of Capitalism was marked by a succession of stock-market crashes that rocked the world.

Here are a few of them. 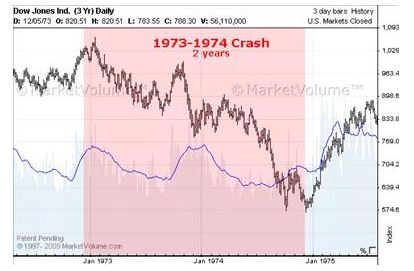 What caused it? The collapse of the Bretton Woods system, coupled with the devaluation of the Dollar and the oil crisis of 1973. Nobody expected the bubble to burst like it did. The DJIA had made gains of up to 15% in the previous 12-month period. It was also the Nixon shock that played a major part in the collapse of the economies around the world at this time. President Richard Nixon decided to unilaterally stop the direct convertibility of the US Dollar into gold. Thanks to Nixon we have free-floating currencies today.

Recovery for the countries around the world was slow and arduous after the 1973-1974 crash. The UK never returned to the level prior to the 1973 crash until 1987, just in time for another crash to occur just a few months later. In real terms, the USA only returned to the same level in 1993!

Monday October 19th 1987 will go down in history. Mondays are bad days. October 28th 1929 bringing about the Great depression and Monday 17thSeptember 2001 stand to testify to that. Why Mondays? Probably because people have the weekend to think over what’s happening, worrying, waiting for the markets to open on Monday morning. They then rush and sell on mass, hoping to cut their losses. Maybe we should work seven days out of seven and cut the thinking time.

Program trading has been cited as the major cause of the 1987 crash, although analysts do still dispute this. Program trading is a sample of stocks that are traded according to the evaluation of the market via predetermined conditions. It enables the trading of large quantities of stocks at the same time. In 2012, program trading made up for about 30% of all volume of shares being traded on the New York Stock Exchange. Technological advances were relatively new in 1987 regarding the world of IT. Perhaps today (at least we might hope) the software programs are more sophisticated and reduce the margin of error. There is no need for human intervention and thus large quantities can be bought and sold at the click of a button.

Friday 13th is unlucky for some! This crash was only a mini one in comparison with all of the others that we experienced in the late 20th century. It occurred onFriday October 13th 1989. It seems to have been the result of the failure in the leveraged buyout of UAL Corporation (the parent company of United Airline), worth $6.75 billion. The deal didn’t come off and it resulted in the collapse of the junk bond market.

The Asian financial crisis began in July 1997 in Thailand and was triggered by the collapse of the Thai Baht. The government of Thailand did not have enough foreign currency to back its fixed-xchange rate and it was forced to float the Thai Baht, removing its peg to the US Dollar. Thailand was already greatly in debt. It was crippled by foreign debts that had led to the bankruptcy of the country prior to this also.  It rapidly spread to Indonesia and South Korea. Then, it hit Hong Kong and Malaysia and the Philippines, dragging them all into a slump.

The dot-com speculative bubble lasted from 1997 until 2000. March 10th 2000 was the peak with the NASDAQ closing at 5, 048.62 (which was double its value in comparison with the year before). As a comparison, the NASDAQ stands at 2, 891.5 today. The 90s was the decade of the beginning of internet and it saw the launch of internet-based companies (that largely and spectacularly failed). The first web browser was launched in 1993. Whether or not the company was actually internet-based or not, it was sufficient at the time just to let others believe that you were, by adding e- in front of the company name.

People always say that history repeats itself. With our analysis-technology software, with our data and empirical evidence, it is hard to believe that we might have believed for one moment that the stocks that were bought and sold in the latter part of the 20th century would continue to rise without end. With hindsight, it might be easy to look back and see where things went wrong. The hardest thing is to actually avoid the euphoria and the frenzied buying and selling and look at what history has taught us, so that we don’t make the same mistakes again. But we do, time and time again

What reasons do you think could explain the stock-market crashes of the late 20thcentury?

But is the worst still to come?

In the next installment, we will look at the stock market crashes of the 21st century.