Isn’t it wonderful how the US believes (whether that be the citizens or the politicians) that the state will never default on its debt repayments? It’s the unfailing belief that your country will pull through and anyone that says otherwise is always either shouted down or told to go elsewhere. It’s all well and good having the belief that you will come out tops. But, the times of the US being at the top of the roost are well and truly over today. We should be playing the funeral march as Obama leaves office for all the debt that has been piled onto the country rather than the Star Spangled tune. The Stars just aren’t that spangled anymore, are they? Unprecedented debt, a budget that isn’t going to get passed, two sides that are playing a stand-off, a country that is held hostage, a debt rating that will be reduced and the Chinese and the Japanese that are now pointing the reprimanding finger.

When the US defaulted on their payments for their mortgages, they got called into the banks and had their houses repossessed back at the start of the financial crises. They were living on credit then and they still are. Obama should get the first plane to Tokyo and then fly on to Beijing. He will be needing to sign a few papers before he hands over the Good Old US of A to the Asians. Uncle Sam is dying a slow and painful death. A death by debt that has shot through the roof of the White House.

While the Republicans and the Democrats play their game of Cowboys and Indians, the country is slipping closer and closer the default possibility of the debt crisis. There may be some out there that will be saying it won’t happen. There are others that are out there saying that they have been waiting for this for a long time now and it serves them right for getting the country into the situation.

To the first people the answer is it will certainly happen whether or not you believe it. It’s more like child’s play and pulling the wool over your eyes. It won’t go away and I’ll just turn round and say ‘I told you so’. To the second people all that can be said is that the default on payment won’t serve as a means of leveraging the politicians out of government or into a better time of a new era that will be rushing through the door as Obama leaves. It’s not the dynasties of politicians that have governed the country that will suffer or change. It’s the people. Revolutions won’t happen either. The people will just be diverted from their purpose by using decoys that are waiting in the wings in Iran and in Syria to change the public attention in the media.

Both China and Japan have jumped on the bandwagon to publically express their unhappiness that there is a stand-off taking place in the USA. Nobody will back down now as it will mean losing face. Obama will stand his ground. But, if he loses, will he go?

The Republican Speaker of the House of Representatives, John Boehner stated that it was now “time to stand and fight”. Don’t you just love an OK Corral shoot-out between the goodies and the baddies? Trouble is it’s mighty hard to see which side is rooting for the goodies these days.  The Republicans will not (according to Boehner) back down. They have the majority and unless Obama concedes on Obamacare they will not vote either the budget or the debt ceiling increase.

China’s Vice-Finance Minister Zhu Guangyao stated: “the US has a large amount of direct investment in China, and China has a vast number of US Treasury bonds. The US is clearly aware of China's concerns about the financial stalemate [in Washington] and China's request for the US to ensure the safety of Chinese investments”.

China holds $1.28 trillion in US Treasuries at the present time. However, according to financial analysts, the figure should be a lot higher in reality since the China invests through intermediaries and not just directly.  What a sorry state of affairs, for the arch-enemy China to have finally found it’s proof that Capitalism only works when it’s backed by Communists.

Japan has also publically stated that they are worried about a US default on debt repayments. If the Dollar falls (which it will), then the Yen will suffer and that will set the cat amongst the pigeons in Japan. Tokyo’s concerns over default are justified. Shares on the Nikkei dropped by 1.2% overnight yesterday.

President Obama cancelled attending the Asia-Pacific Economic Cooperation summit (APEC), which only added fuel to the fire for the Asians. But, more importantly it allowed other countries to take center stage and that was good news for Russia and China in particular. 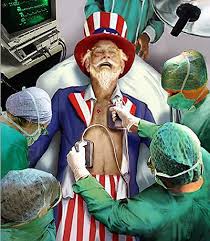 The politicking theatrical display in Washington has enabled China to very much deliver a stern lecture to Obama as well as to the US in general. It has been able to remind the country just how much they are in debt to the Chinese and while they are waiting to take over as the Reserve Currency as well as the top economic power in the world it must be remembered that for the moment the Dollar is still the Reserve currency. Any change that is abrupt will undoubtedly bring about chaos.

The US is currently digging its own grave. The world’s largest economy and the home of the world’s Reserve Currency will be finally saying goodbye, but it will be in Chinese most certainly. Some believe that its political theatrics and lawmaker antics and that none of these worries will happen at all. If only. It’s a wonderful site to witness the historical failings of a country especially when nobody believes that it is going to happen.

The Republicans will be pinning the tail on the donkey that’s for sure! Obama will end up with egg on his face and he will own this one in history when the tale gets told in the future. Whatever happens: Uncle Sam is dead!

is running a deficit thus is in the trillions and they act as if it’s just a few bucks?

You might also enjoy: Where Washington Should Go for Money: Havens

Sugar Rush is on | Human Capital: Switzerland or Yemen? | Wonderful President of USA and Munchkins | Last One to Leave Turn Out the Lights | Crisis is Literal Kiss of Death | Qatar’s Slave Trade Death Toll | Lew’s Illusions | Wal-Mart: Unpatriotic or Lying Through Their Teeth? | Food: Walking the Breadline | Obama NOT Worst President in reply to Obama: Worst President in US History? | Obama's Corporate Grand Bargain Death of the Dollar | Joseph Stiglitz was Right: Suicide | China Injects Cash in Bid to Improve Liquidity