U.S. Treasury “Firm Believers In Gold", Will Not Sell Even To Avoid Default 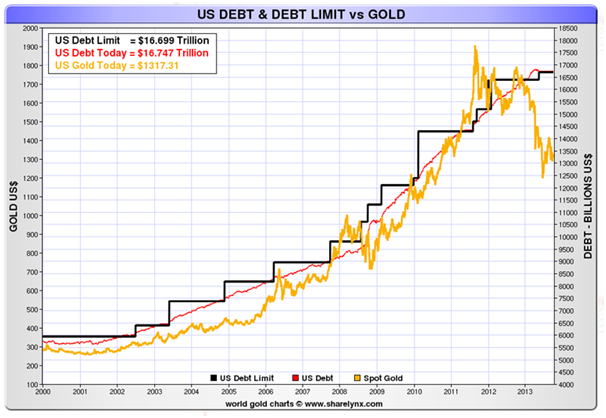 Gold edged off, falling beneath $1,300/oz in London  as the dollar bounced from an eight-month low  on hopes that the considerable risks due to the U.S. government shutdown and debt ceiling are addressed.

President Barack Obama launched a series of White House meetings with lawmakers yesterday to search for a way to end a government shutdown and raise the debt limit. Congressional aides from both parties noted U.S. lawmakers are not opposed to a short term increase in the debt ceiling limit.

The U.S. will almost certainly raise the debt ceiling again, as it has done dozens of times since 1960, and this will be very bullish for gold as it has been in the last 10 years (see chart).

Gold fell despite monetary dove, Janet Yellen, being nominated as the next chief of the U.S. central bank. Her appointment is positive for gold and will be supportive.

Central banks remains net buyers and gold sales remain nearly non existent. Gold sales under the Central Bank Gold Agreement in the year to September 26 were the lowest of any year since the first version of the pact came into force in 1999, World Gold Council shows.

Gold In US Dollars 1 Year - (Bloomberg)

China is on pace to consume a record amount of gold again this year, which may be partly due to the central bank diversifying its foreign-exchange reserves.

The People's Bank of China is likely continuing to quietly accumulate gold. They will announce it when they are ready as China does not want sharp price rises to effect their stealth gold diversification programme.

Gold in US Dollars 5 Year - (Bloomberg)

The Chinese government and central bank realises, like the U.S. Treasury and Bundesbank that gold is an important store of value and diversification which protects against currency devaluations and systemic risks and a systemic crash.

An important, little noticed article published over the weekend pointed out that theUnited States Treasury "remain firm believers in gold".

Brett Arends of the Wall Street Journal and Marketwatch asked the U.S. Treasury if they would consider selling some of the country’s gold reserves to pay the bills if the budget crisis escalates later this month.

Their response? Not a chance.

The Treasury has considered that option, among the many others, and rejected it.“Selling gold would undercut confidence in the U.S. both here and abroad,” a spokeswoman said, “and would be destabilizing to the world financial system.”She was quoting an official position laid out last year in a letter to Senator Orrin Hatch, but so far apparently little noticed on Wall Street.

The Treasury’s position is, in a word, extraordinary. We hear all this skepticism these days about gold. Yet the Treasury itself considers U.S. gold holdings to be a key element in maintaining confidence in the country’s soundness—and the stability of the international financial system.

In other words, according to the official position of the U.S. Treasury, the promises and commitments of the government, and its “full faith and credit,” are actually worth less than gold. They’d rather default than lose their bullion.

The federal government has about 8,100 metric tonnes of gold, held in places like Fort Knox. At current prices that’s worth about $340 billion. That would only keep the government going for about a month, which tells you how little gold we really have in relation to our commitments.

I confess I am a gold agnostic—neither a confirmed skeptic, nor a true believer. I try to keep an open mind. (I do see some value in owning it, since in the past it has often tended to do well when other assets, such as stocks and bonds, have done badly.)

But the Treasury’s comment is really remarkable. The Treasury suspects that if the government just sold its gold, all those “gold skeptics” who run the financial markets would panic.

What does that tell you?

The full article can be read  here.

A buy and hold strategy, while difficult in recent months, will continue to reward the prudent.

In these uncertain times, all owners of gold and those considering owning gold should acquaint themselves with the most appropriate storage options for their own particular circumstances.

GoldCore’s ebook How To Store Gold Bullion- The Seven Key Must Haves is a must read in this regard Download here.