Gold is marginally higher in dollars after the dollar fell versus other major currencies. It remains near a three month high. It is looking well technically and from a momentum perspective and appears capable of breaking above the $1,300 level. This should lead to gold rising sharply to test the next level of resistance at $1,365/oz.

Asian and European stock markets have resumed their downward slide today which should support gold. In Asia, this ends a five-session winning streak for stocks which had been built on relief that the U.S. Federal Reserve would maintain its ultra loose monetary policies. 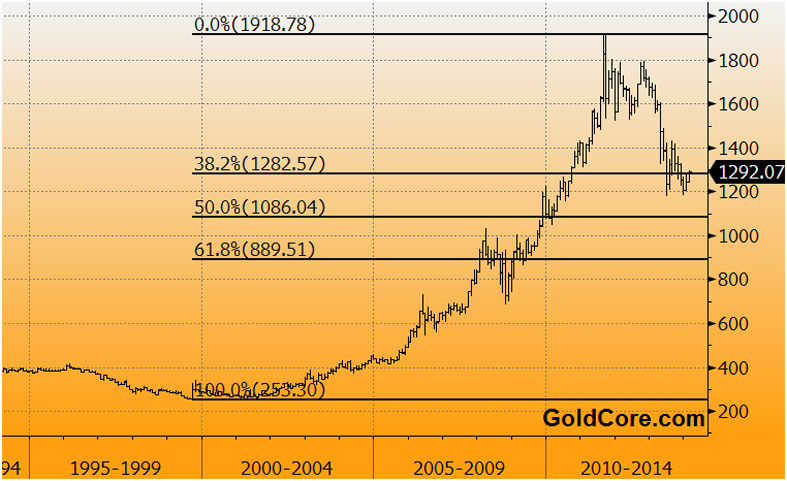 The “personal pensions savings” of the European Union's 500 million citizens could be used to fund “long-term investments” to “boost the economy” and help plug the gap left by banks since the financial crisis, Reuters has reported (see News) after seeing an EU document on the matter.

The EU is looking for ways to wean the 28 country bloc from its heavy reliance on bank financing and find other means of funding small companies, infrastructure projects and other unspecified investment.

"The economic and financial crisis has impaired the ability of the banking and financial sector to channel funds to the real economy, in particular long-term investment," said the document. The Commission will ask the bloc's insurance watchdog in the second half of this year for advice on a possible draft law "to mobilize more personal pension savings for long-term financing."

An objective stress test of the euro zone's biggest banks could reveal a capital shortfall of a whopping  770 billion euros (more than $1 trillion), a study by an advisor to the EU's financial risk watchdog and a Berlin academic has found.

Another crisis seems likely given the poor financial state of many banks and this is likely to trigger depositor  bail-ins rather than bank bail outs.

This study and others published ahead of the EU stress tests, whose results are due in November, are important because they set the expectations against which markets will judge the credibility of the ECB's attempt to prove its banks can withstand another crisis without taxpayer help.

Download our Bail-In Guide: Protecting your Savings In The Coming Bail-In Era (11 pages)