Gold drifted lower today as traders took profits from recent gains, but gold held not far off 3 and a 1/2 month highs due to a weaker U.S. dollar and concerns over U.S. and global economic growth.

Webinar: Gerald Celente On Strategies For Protecting Your Wealth In 2014 And Beyond
Join Gerald Celente on this broadcast this Thursday as he examines the opportunities in 2014 and in the coming uncertain years. 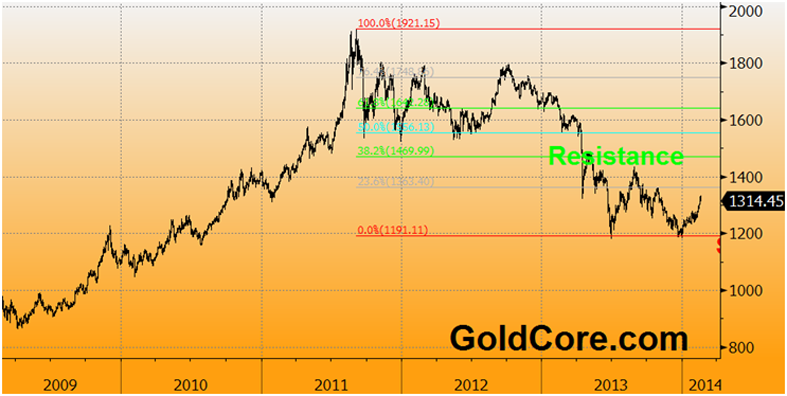 Bullion is up 10% this year as investors and store of value buyers see the 28% fall in 2013 as a buying opportunity. The volatility and weakness in equities globally due to emerging market turmoil and economic concerns is leading to safe haven demand.

Silver also fell but wasn't too far from a 3-1/2 month high of $21.96 hit on Monday. Spot silver prices rose for a 12th day yesterday, the longest rally since at least 1968, data compiled by Bloomberg show.

The World Gold Council’s global supply and demand figures have been released. They confirm what was already known - huge physical demand for coins and bars globally was counter acted by  significant liquidations by COMEX speculators and weak hand ETF investors.

The data confirms that 2013 saw record demand for coins and bars globally but especially in China, Japan and much of Asia.

Annual global investment in bars and coins reached 1,654 tonnes, up from 1,289 tonnes in 2012, a rise of 28%, and the highest figure since the World Gold Council’s data series began in 1992. For the full year, Chinese and Indian investment in gold bars and coins was up 38% and 16%, respectively.

China became the world’s largest store of wealth buyer of gold in 2013. They are not consumers as only a tiny fraction of  gold is ever consumed. Chinese people bought a record 1,066 metric tons of gold last year, as sudden price falls led to a 32% jump in bars, coins and jewelry buying.

Chinese gold demand surged past Indian demand making China the world’s number one buyer of gold. However, India's gold demand remained buoyant in 2013 and rose by 13% to 945 tonnes compared to 2012.  The Indian demand number does not capture the full level of demand as the governments punitive import taxes led to a huge jump in black market activity and the smuggling of gold in huge quantities into India.

Gold demand in Japan jumped threefold in 2013 as people in Japan sought refuge from Prime Minister ShinzoAbe’s campaign to stoke inflation and weaken the yen. Demand for jewelry, bars and coins increased to 21.3 metric tons last year from 6.6 tons in 2012. Demand for jewelry rose 5.4% to 17.6 tons and Japan became a net buyer of bars and coins for the first time since 2005 with 3.7 tons of purchases. There is scope for a massive increase in Japanese  investment, pension and store of wealth demand in the coming years.

Central banks added 61 tons to gold reserves in the fourth quarter, the least since the end of 2010, and full-year purchases declined 32% to 368.6 tons, according to the council. Nations added to holdings for 12 consecutive quarters and will continue purchasing amounts in the hundreds of tons which should support gold.

It is important to note that full-year 2013 total global gold demand of 3,756 tonnes is worth just $170 billion which is what the Federal Reserve prints in less than three months. It is much less than what the Fed, ECB, BOE, BOJ and PBOC and other central banks are printing every month.

Global gold coin and bar demand at 1,654 tonnes per annum is worth just $75 billion which is not far off what the Federal Reserve is printing each month now. This shows how while demand has increased in recent years, the demand is very sustainable and there remains room for a significant jump in demand in the coming years.

Webinar: Gerald Celente On Strategies For Protecting Your Wealth In 2014 And Beyond
Join Gerald Celente on this broadcast this Thursday as he examines the opportunities in 2014 and in the coming uncertain years.

Gerald Celente needs little introduction: Founder of The Trends Research Institute in 1980, Gerald Celente is a pioneer trend strategist. He is author of the national bestseller Trends 2000 and Trend Tracking (Warner Books) and publisher of the internationally circulated Trends Journal newsletter.