With Average House Prices At $6.8 Million In Central London, Is A Property Bubble Set To Burst!

Gold has continued to edge higher and should achieve a fifth consecutive weekly higher close. This continued rise in gold’s price is bullish from a technical and momentum perspective.

There are increasing signs that the London residential property market is displaying bubble like qualities.

Authorities such as the Bank of England have denied that a house price "bubble" is developing due to ultra-loose monetary policies.

However, if present trends continue, national house price inflation may rise above 10% within a few months, far higher than the current rate of CPI inflation, which stood at 1.9% in January. 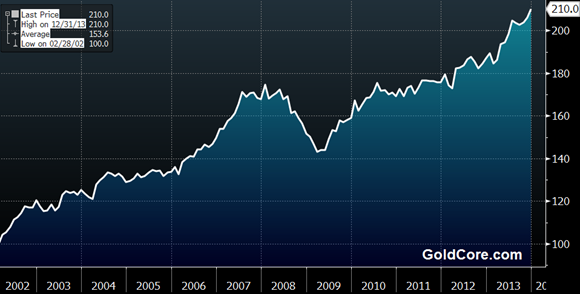 Although it’s often argued that London is a unique property market fuelled by a buoyant London economy and continued international interest from overseas buyers, recent price appreciation has taken on a distinct frothy appearance.

This is not to say that London property prices may not keep rising in the short term – momentum is a powerful force. However, investors should tread carefully and evaluate evidence of a bubble.

“This time is different.”

These are the four most expensive words in financial history. Yet, this is the mantra regarding London property prices.

Evidence Of A Property Bubble

Official house price reports from organisations such as the Land Registry for England and Wales and the Office for National Statistics (ONS), the Halifax House Price Index and from the Nationwide all show that property prices in most parts of the UK are rising. All these surveys are pointing in the same direction and show that London property prices have risen and are rising at a particularly fast rate.

According to the widely used Halifax house price index, annual house price inflation is currently running at 7.5% for the UK, but at 15.4% for Greater London, where the average house price has now reached £310,000.

House prices are continuing to accelerate across the UK, according to the latest snapshot from the Halifax mortgage lender.

Its latest survey, for February, shows that prices rose by 2.4% last month, leaving them 7.9% higher than a year ago. That was the fastest annual pace of increase since October 2007 and means the average UK home now costs £179,872.

However, record levels of debt and continuing pressures on household finances, as earnings fail to keep pace with consumer price inflation, are expected to remain a constraint on the rate of growth of house prices in the UK.

Sales have been picking up strongly too in the past year. In January, house sales in the UK had risen for the ninth month in a row. The number of mortgages approved for home buyers, but not yet lent, was 42% higher than a year ago, suggesting a further rise in sales is still to come.

At the top end, or prime, segment of the London market, which generally means the top 5-10% of properties, the average price of a property is now £4 million in central London, £1.8 million in Greater London and £1 million in the surrounding Home Counties. While overseas buyers investing in central London have long been credited to have pushed out the majority of other buyers, their impact is now starting to boost prices in the prime segments of Greater London and surrounding areas, as rich domestic buyers are also forced to buy further afield.

That overseas rich cash buyers are primarily responsible for driving up central London prime residential prices is not just hearsay. It is well documented. London’s Evening Standard recently highlighted at least 740 ‘ghost mansions’ worth £3 billion in total that are currently sitting empty and unused around central west London and a number of other enclaves. Even the current uncertainty in the Ukraine is adding to the mix, with London’s prime estate agents having noticed an increase in enquiries from rich Ukrainian and Russian clients over the last few weeks.

According to Knight Frank, the reputable London estate agent, house prices in the prime central London segment rose for the 40th consecutive month in February, the longest consecutive rise since the firm began producing its London prime index in 2004. They note that 12 month price appreciation to February 2014 was 12.8% in the sub-£2 million category and 3.4% in the £10 million plus bracket. Knight Frank notes that the rate of increase at the very top end £10 million plus has slowed compared to the previous year, when it reached 6.1%, and the year prior to that, when it touched 10.7%. With central London so expensive, the ripple effect is going ever outwards.

Savills, a similar firm to Knight Frank, forecasts that London prices over the next five years to 2018 will still rise strongly with the larger gains outside the very centre. Savills predicts a 23.1% gain in central London over the five years to 2018, a 22% gain in ‘other London’, and a 25% gain in inner commuting belts. However there is evidence that these forward looking rosy forecasts by industry agents need to be tempered with the consideration of additional evidence.

U.S. economist Robert Shiller recently warned that London property prices could be in a bubble. Shiller, the Yale based economist who shared last year's Nobel Prize in economics, is notably for his work on demonstrating that asset prices can become irrational and out of step with economic fundamentals. He is co-creator of the widely followed Case-Shiller Home Price Indices in the US. Last October, Shiller commented that the rapid price rises in London property looks like a bubble that is being fuelled by easy credit availability.

In its latest monthly survey of the UK residential market, the Royal Institution of Chartered Surveyors (RICS) confirms an overheating London market, finding that price rises are by far the strongest in London and the South East relative to the rest of the country. Every month RICs collates market feedback from its’ members into a blended net balance indicator of sentiment using factors such as house prices, new buyer enquiries, agreed sales, and new vendor instructions.

The overall net balance figure for the UK is now at +50 and has been so for five consecutive months. The last time this occurred was in mid-2002. Most strikingly though, the net balance figure is now +87 for London and +80 for the South East region. As a comparison, the same figure is +21 in Wales and +12 for the North of England.

Feedback from RICs members in London is nearly unanimous in highlighting “a lack of supply pushing prices higher”, “a dire shortage of new sales”, “most properties going under offer as soon as they hit the market”, and “international buyers still showing a good interest, particularly in new builds”. Commenting on the February report, RICs director Peter Bolton-King said that London prices may become unstable.

Adding to the evidence of a London bubble, EY Item Club, the independent economic forecast group sponsored by Ernst Young, released its own report last month, aptly titled “UK housing: no bubble to burst…except in London”. The EY report warns that housing bubble conditions are emerging in Greater London with the acceleration of prices now extending beyond the prime properties of central London and out to the broader London residential market.

EY notes that policy makers and regulators could attempt to cool demand by enforcing London specific lending limits on borrowers based on mortgage to income multiples, but the authors concede that without any real changes in government policy or market dynamics, London’s unique factors of a) super-rich cash buyers in the prime market and b) well paid London professionals in much of the rest of the market, appear to indicate that price appreciation is not going to cool off anytime soon.

Independent social policy think-tank Civitas also released a property study last month and called for the imposition of controls on wealthy overseas buyers in the London property market. The authors refer to the “rampant house price inflation” in London, where the “global super-rich” are using London property as an investment vehicle and a safe haven shield from more volatile countries, while younger and less well-off London residents are being squeezed out of the market.

The report highlights that while the ratio of average income to average property prices across the UK has risen from 2.3 in 1980 to 4.6 in 2013, the same ratio for London hit 6.1 in 2013. As a supply boosting measure, Civitas calls for regulations that would only allow overseas investment buyers to acquire existing properties in London if they proved this would add to the available housing stock. Similar rules already exist in economies such as Australia, Switzerland and Singapore.

The most recent OECD semi-annual economic outlook warned that UK house prices might be experiencing a potential bubble since economic policy and supply constraints are causing an overheating market.

UK residential market prices are currently being supported by various favourable economic factors and government led schemes. The government’s ‘help to buy scheme’, supposedly structured for those who otherwise could not afford a property, offers an interest free loan of 20% of the purchase price of a house up to £600,000, with a 15% lender loan guarantee by the government. This scheme is helping to drive mortgage applications and has been criticised by the IMF and others for potentially stoking a property bubble, and for having specified an upper house price that, while realistic for London, is very generous for other parts of the country.

Historically low official Bank of England rates are feeding into relatively favourable mortgage rates. The official stance of the UK Treasury and Bank of England is not expected to change anytime soon since they require low interest rates to support an economic recovery. However external economic shocks are not unknown and can come when least expected.

Affordability of property in relation to earnings is an issue and is becoming a bigger issue as prices continue to rise, not just in London, but across the UK. There are also signs that various parts of the market are becoming choked as those who would otherwise move up can’t and so this impacts younger potential buyers who can’t get on the property ladder.

Asset bubbles don’t always announce themselves and can sometimes be violent when they begin. This then can create liquidity issues on the sell side as many participants rush to sell simultaneously.

Interest rates are at historic lows. Given the precarious financial position of the UK it is highly likely that interest rates will only go higher in medium and long term. The ramifications for property markets and especially the residential sector should not be ignored.

London is a truly global city, as such its fortunes rise and fall on the tide of the global international marketplace.

Evidence clearly suggests the London property market is attracting safe haven funds from global investors seeking reprieve from a post financial-crisis world where the competitive devaluation of currencies, prolonged low interest rates, unorthodox monetary policy such as QE have all combined to make London an attractive haven for investment monies.

As monetary officials the world over wrestle with deep systemic imbalances, geopolitical uncertainties and the looming threat of bail-ins, investors will continue to seek shelter in assets that operate as a safe haven such as property but also more conventional safe haven assets such as gold.

We believe that ultimately these elevated asset price levels in London property are unsustainable and will be subject to violent correction. Given that interest rates are at historical lows, the London property prices will become increasingly sensitive to any upward movement in interest rates.

This Market Update is reprinted in full in Issue 7 of GoldCore's Insight Series. Download your copy here: Is London’s Property Bubble Set To Burst?