China’s Farmers Being Forced Into Cities

China’s Farmers Being Forced Into Cities

Things didn't look too interesting earlier but now we've got our expected and predicted 0.5% weak bounce thanks to CHINA!!! unveiling their plan to push another 100M people into the cities by 2020. Did I say plan? More like insane scheme, actually.

While 100M may not seem like a lot to China, it's still 8% of their population – that would be like the US moving 8M families to the cities in 6 years. Imagine the chaos and upheaval, the strain on urban resources and the collapse of the rural areas they leave behind.

Still, only the good side is being seen by the markets and copper shot up from our bottom call at $2.925 to $2.975 (5%) in the 3 hours following the 3am announcement and global markets jumped 0.5% as computer programs that still think copper is a major indicator began BUYBUYBUYing on what must be some good news somewhere.

So that's the nature of the WEAK bounce we're seeing this morning.  We'll take it more seriously when it's a 1% strong bounce and, if that holds – THEN we'll consider getting on board but a weak bounce off news that China is going insane with infrastructure spending doesn't give us a whole lot of confidence in the market having any real strength:

The plan repeated previous government statements on allowing farmers more freedom in selling or leasing their land. It gave no timetable or specific targets.

Some smaller cities have already eased their hukou controls, which also tie benefits to a family's residential status, to attract more rural laborers. But these efforts have only been partially successful because many people prefer to move to large cities for better job opportunities and public services.

The government would expand the coverage of social welfare, including pension and medical insurance, and reduce the costs of paying social insurance, the plan said without giving specifics.

The authorities would also allow local governments to issue municipal bonds and push ahead with a property tax law that would be aimed at boosting revenue to help cover the cost of increased urbanization. The plan also calls for expanding resource taxes to top up local government budgets. There were no specifics on any of these revenue measures, however. 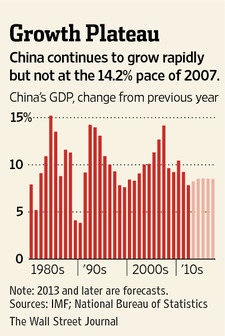 Pretty horrific video, right? The CHINA growth story is really a story about Government officials making a land grab in the breadbasket while feeding more wage slaves to the factory owners in the city by forcibly growing the labor pool and depressing wages. Meanwhile, fat infrastructure projects are doled out to Party favorites and the debt is shoved off to local Governments, which are forced to hit goals and, in turn, borrow money from banks or issue bonds.

Like any Ponzi scheme, China growth has topped out and now it's all the runners of the con (Chinese Government) can do to keep investors from trying to pull out of the game. Past performance keeps people optimistic for quite some time but how many times in a row can China say "INFRASTRUCTURE" to keep the plates spinning for another 6 months?

Speaking of land grabs – let's not forget about Crimea, which has proclaimed itself to be independent – but only long enough to formally seek Russia's "permission" to rejoing the country as a republic. Western leaders have already declared the results of the referendum illegal. Crimea's parliament has also voted to nationalize state property on the territory of the peninsula following the announcement of Crimea's independence. This is the flaw in Democracy – they did "vote" for it, didn't they? Since we've had a 2.5% drop, our 5% Rule™ demands a 0.5% bounce from these levels. Since China made a big announcement (yesterday), we're not going to be impressed with a weak 20% retrace so we'll demand a strong 40% retrace (1% bounce) by the end of the week, otherwise we'll be back to bearish in our short-term bets. Any failure of the weak bounce levels, of course, is also a reason to get bearish and already this morning – I put up a note to our Members to short the Futures at 16,100 on /YM (Dow) and 1,185 on /TF (Russell), watching 1,845 on /ES (S&P) to confirm weakness.

The Fed has a Rate Decision on Wednesday (2pm), followed by a Yellen Press Conference (2:30), so no other Fed Speak this week, but Real Estate Data is likely to be weak and all this political uncertaintly leads us to only one course of action.

Be careful out there!