[this article has been updated since originally published]

One of the macro liquidity indicators that I track in the WSE's Professional Edition Fed Report shows the apparent reason why US financial markets, both stocks and bonds, had retained their bouyancy until the last couple of days. 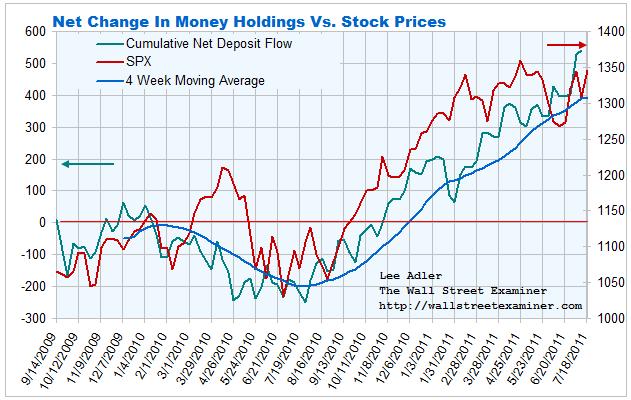 I won’t bore you with the particulars of the proprietary formula used to calculate this. It uses publicly available weekly data and is based upon the theory that as cash moves between money market funds and the banking system, there’s a relationship between that movement and the movement of stock prices. As you can see, it has correlated well with stock prices over the past couple of years.

This is just one of a number of such indicators that I cover in the WSE's Professional Edition Fed Report. The most important of those is Fed Permanent Open Market Operations (POMO), which is turning bearish due to the ending of QE2.

It seemed that virtually every market observer expected that event to have a bearish impact. My expectation was that it would not be felt until mid July due to technical factors having to do with the Treasury supply settlement schedule. But over the past month, the indicator shown above began to surge, boosting support for the market just as the Fed was ready to step away.

Hysterical media pundits have been loudly proclaiming that the sky is falling as a result of the approaching US Debtmageddon. In fact, until Wednesday, July 27, the opposite of their dire predictions had been occurring, with both stocks and bonds remaining resilient. The Treasury market even rallied on Tuesday 7/26 after the uber depressing Obama Boehner show on Monday night night. You gotta laugh.

The chart above makes clear the reason for this market resiliency. Money has been flooding into the US banking system over the past month. The source is apparently capital flight out of the Eurozone. While I don’t track the data at the source of those flows, we know from anecdotal reports that there’s been capital flight out of parts of Europe. Other US banking system indicators suggest that this is the source of the surge of cash into US bank accounts. The cash account balances of US based foreign banks have been surging in recent weeks. So have their trading accounts. Deposits in domestically chartered banks have also surged, but their trading accounts have not. It would appear that that the resiliency in the US equity market has been driven by foreign private buying. The Fed’s data shows that foreign central banks have not been a factor. This is coming from the private sector.

The markets no longer have the Fed keeping a bid under prices. Likewise, Foreign Central bank buying has been far below the levels needed to keep prices levitated. Primary Dealers are having their problems, having been short the Treasury market for months as prices rose. It would appear that the market’s only prop keeping prices elevated now is this miracle panic out of Europe and into the US. As a result of this surge of cash, US banks have even been forced to start buying Treasuries again, after months of avoiding them like the plague.

How long this surge of capital into the US will last is the question. It is not driven by the US being such a great place to invest. It is driven by the fact that regardless of all its apparent problems, the US appears to some marginal increment of investors to be the least bad of a bunch of lousy options. It only takes a relatively small increase in cash at the margin to impact prices.

All this could change in the weeks ahead. Likewise, as total worldwide systemic liquidity shrinks, it may not matter how much of it flows toward the US. US financial system indicators should tell us exactly when those flows are becoming inadequate to continue this levitation act. The best indicator may be the stock market itself. From the looks of things in recent days, it is unlikely to reward those investors who were panicked into US assets as a refuge from the troubles of Europe.