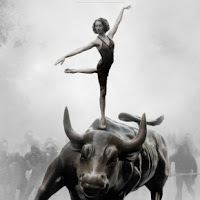 Wall Street big banks, although not entirely responsible for the Great Recession, most experts agree that banks creating and partying in the subprime securitization mess is one of the major contributing events that broke the camel's back.

The repeal of provisions in 1999 of the Glass–Steagall Act of 1933 has not only effectively made "Too Big To Fail" a reality and a moral hazard, the subsequent trillion's of dollars in bank bailout funded by the taxpayer has also saddled the already over-indebted nation with even more debt.

Even with the Dodd-Frank financial reform, from a market perspective, there are still issues within the structure of the current banking operation that are not adequately addressed.

First of all, banks should not have prop trading in-house, period.  At the very least, the clearing house and the trading arm now reside withing the same banks need to be completely separated into different companies, with a physical Chinese titanium wall in between.

The reason is that when the the banks, who are active players in trading the markets, can see where all the future market transactions are heading with their clearing house operation, they can position and front-run everybody.  That's an unfair advantage not only disrupting the normal functioning of the markets, but also creates market volatility.  Frankly, we are flabbergasted that with new government regulations coming out of almost everywhere everyday, there's no regulatory oversight in that aspect of the banking industry.

Another area that needs regulatory attention from a market perspective is that investment banking houses (rating agencies as well) should be banned from releasing any kind of market moving 'research notes' to the general mass media, unless they are released to everyone (clients as well as the general public) at the same time!

When the 'research notes' by, for example, Goldman Sachs, JP Morgan, etc. hit the mass media, those banks and their rich paying clients are already positioned to take advantage of the subsequent reaction en masse from retail investors, which, by the way, are 'properly' disclosed in the fine print of their research notes.

Why do you think banks make their "intellectual property" available to the non-paying public in the first place?  Why do you think Goldman flip-flops their forecasts every six months?  It is to move markets to their advantage, as they know they can.

A good example of this would be the market movement in the week before the S&P's "official" downgrade of the U.S. sovereign debt.  It is quite obvious judging from the decisive market trading actions that some big players knew ahead of time about the downgrade most likely from S&P.  As we stated before,

As usual, retail investors were the last to know, and once again, Wall Street seemed somehow to know way ahead of even the Whitehouse and Secretary Geithner as nobody sells off 500 points on Dow based on 'rumors'.

S&P is reportedly under investigation of possible insider trading; however, any good lawyer could argue the alleged "leak" by S&P does not exactly fit into the insider trading as stipulated by law.  Again, that suggests an unfair market manipulation and advantage that's entirely not addressed in the current regulatory and legal framework.

Here are some more staggering statistics about the nation's biggest banks from Think Progress:

When banks have this much power, and consecutive quarters of huge trading profits, it is a sign that 'Too Big To Fail' needs to be broken apart as they represent too much monopoly, as well as a major systemic risk, over markets and the entire financial system.