Update on Sopa and Pipa

In the face of massive Internet protest today, key senate and house backers of the SOPA and PIPA web censorship bills - including Senators Marco Rubio, Roy Blunt, John Cornyn, Orrin Hatch, John Boozman and Jim DeMint, and Representatives Ben Quayle and Lee Terry - have dropped their support. So have a number of other senators. At least 17,000 websites allegedly joined in the protest. Indeed, even several congresspeople joined in the protest. Here's what Congresswoman Anna Eshoo's homepage looks like right now: 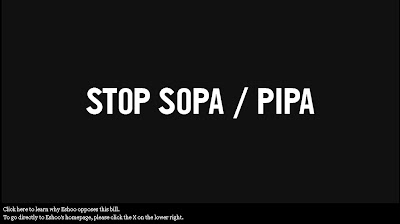 And congressman Earl Blumenauer joined in as well.

But SOPA's key sponsor - Lamar Smith - is sticking with the flawed bill.

In fact, the Senate is set to vote on PIPA on January 24, 2012, and the House Judiciary Committee continues its markup of SOPA in February.

Hollywood moguls have declared that they will not contribute any more money to Obama since he came out against SOPA. (But given that Obama promised to veto NDAA, and then didn't, that might not mean very much.)

Given that even the web "dark out" hasn't killed these zombie bills, Anonymous is calling for physical protests to oppose the bills:

This is an urgent emergency alert to all people of the United States. The day we've all been waiting for has unfortunately arrived.

The United States is censoring the internet. Our blatant response is that we will not sit while our rights are taken away by the government we trusted them to preserve. This is not a call to arms, but a call to recognition and action! The United States government has mastered this corrupt way of giving us a false sense of freedom. We think we are free and can do what we want, but in reality we are very limited and restricted as to what we can do, how we can think, and even how our education is obtained. We have been so distracted by this mirage of freedom, that we have just become what we were trying to escape from.

For too long, we have been idle as our brothers and sisters were arrested. During this time, the government has been scheming, plotting ways to increase censorship through means of I S P block aides, D N S blockings, search engine censorship, website censorship, and a variety of other methods that directly oppose the values and ideas of both Anonymous as well as the founding fathers of this country,who believed in free speech and press!

The United States has often been used as an example of the ideal free country. When the one nation that is known for its freedom and rights start to abuse its own people, this is when you must fight back, because others are soon to follow. Do not think that just because you are not a United States citizen, that this does not apply to you. You cannot wait for your country to decide to do the same. You must stop it before it grows, before it becomes acceptable. You must destroy its foundation before it becomes too powerful.

Has the U.S. government not learned from the past? Has it not seen the 2011 revolutions? Has it not seen that we oppose this wherever we find it and that we will continue to oppose it? Obviously the United States Government thinks they are exempt. This is not only an Anonymous collective call to action. What will a Distributed Denial of Service attack do? What's website defacement against the corrupted powers of the government? No. This is a call for a worldwide internet and physical protest against the powers that be. Spread this message everywhere. We will not stand for this! Tell your parents, your neighbors, your fellow workers, your school teachers, and anyone else you come in contact with. This affects anyone that desires the freedom to browse anonymously, speak freely without fear of retribution, or protest without fear of arrest.

Go to every I R C network, every social network, every online community, and tell them of the atrocity that is about to be committed. If protest is not enough, the United States government shall see that we are truly legion and we shall come together as one force opposing this attempt to censor the internet once again, and in the process discourage any other government from continuing or trying. ***

EMERGENCY ACTION AUTHORIZED. ORGANIZATION OF LOCAL PROTESTS IS NEEDED. CONVERGE AT FREEWAYS AND HIGHWAYS. LIBRARIES, MALLS, GOVERNMENT BUILDINGS, SCHOOLS...ALL ARE ACCEPTABLE AREAS! IF YOUR GOVERNMENT SHUTS DOWN THE INTERNET … SHUT DOWN THE GOVERNMENT!

Hundreds protested against the bills in front of senators offices in New York today.

In related news, an Occupy protest aims to shut down San Francisco's financial district on Friday.