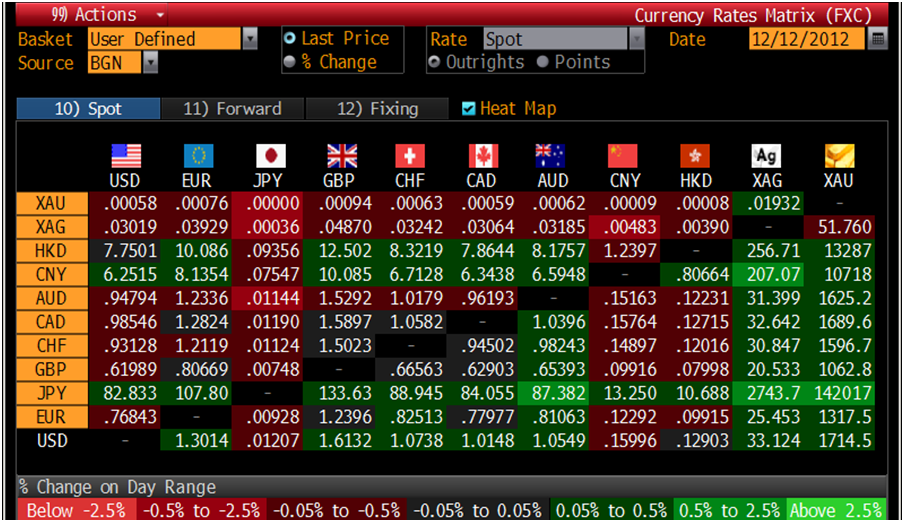 Gold is hovering unchanged ahead of the U.S. FOMC policy statement that takes place at 1730 GMT and Ben Bernanke’s news conference is at 1915 GMT.  Investors believe that the Fed will reveal more bond purchases and a continued loose monetary stance which will favour gold and silver’s appeal as hedges against inflation.

U.S. President, Barack Obama and John Boehner, Speaker of the House of Representatives, spoke by phone on Tuesday after exchanging new proposals on the fiscal cliff. Fiscal cliff concerns are likely affecting U.S. consumer and business confidence in the run up to Christmas and this will likely impact an already vulnerable U.S. economy.

Gold-backed ETF’s climbed again to a new record at 76.178 million ounces on Dec. 10th, after dropping off a record high in the prior session, due to robust demand – particularly from the institutional sector.

Gold should reach a new record again in 2013 according to UBS in their daily note today.

Turkey’s trade balance may turn on whether President Barack Obama vetoes more stringent sanctions against Iran after the U.S. Senate passed a measure targeting loopholes in gold exports to the Islamic Republic.

Turkey’s gold trade with neighbouring Iran has helped shrink its trade deficit over the past year according to Bloomberg.

Incredibly, precious metals accounted for about half of the almost $21 billion decline.

That’s calmed investor concern over its current-account gap, and helped persuade Fitch Ratings to give Turkey its first investment-grade rating since 1994.

The U.S. Senate voted 94-0 on Nov. 30 to approve new sanctions against Iran, closing gaps from previous measures, including trade in precious metals. Obama, who opposes the move on the grounds it may undercut existing efforts to rein in the nation’s nuclear ambitions, signed an executive order in July restricting gold payments to Iranian state institutions.

Turkey exported $11.9 billion of gold in the first 10 months of the year, according to the Ankara-based statistics agency’s website.

A very large 85% of the shipments went to Iran and the United Arab Emirates.

Iran is buying the gold with payments Turkey makes for natural gas it purchases in liras, Turkish Deputy Prime Minister Ali Babacan told a parliamentary committee in Ankara on Nov. 23.

Iran provides Turkey with between 21% and 25% of its gas, data from the Energy Market Regulatory Authority and Energy Minister Taner Yildiz showed.

The current-account deficit may fall to $57.3 billion by year-end, according to a bi-weekly survey of economists by the central bank published on Dec. 6. That compares with $77.1 billion last year, when Turkey had the second-biggest deficit in the world, behind the U.S.

The U.S. and the European Union say Iran is secretly pursuing a nuclear weapons capability. Iran says its nuclear program is strictly for civilian energy and medical research.

The trade with Iran is a strategic necessity for Turkey, and the government will view any new U.S. sanctions according to its own interests, Prime Minister Recep Tayyip Erdogan said in Istanbul on Dec. 3. Turkey isn’t concerned with how it pays for the gas it buys from Iran and would pay in “potatoes” if necessary, Yildiz said two days later.

The proposed U.S. amendment introduced by senators Robert Menendez and Mark Kirk is confusing and inconsistent in applying sanctions, according to an e-mail from the White House on Nov. 29 that was obtained by Bloomberg News.

The Menendez-Kirk amendment would allow purchases of Iranian natural gas if payments are made in local currencies into an account that Iran could only use for approved trade.

The State Department said Dec. 7 that nine oil-importing nations, including Turkey, will continue to be exempt from the sanctions aimed at Iran, according to an e-mailed statement. A spokeswoman at the U.S. embassy in Ankara, who asked not to be identified in line with policy, declined to comment the next day.

The gold debate poses a dilemma for Turkey, and the nation’s finances may be affected by the outcome, according to Nilufer Sezgin, chief economist at Erste Securities in Istanbul.

The Turkey Iran gold for energy trade shows the benefits of gold.

While not a productive asset, it can create much employment, preserve wealth and has important monetary uses – especially in times of crisis.

Gold is becoming an essential means of payment again in the Middle East again. We expect to see this trend continue in the coming months as competitive currency devaluations are pursued by nations globally in order to prevent deep recessions and depression.

In time other large energy exporters such as Russia and Venezuela may take payment for their oil exports in gold.

Those continuing to simplistically call gold “a bubble” have yet to realise how gold is becoming money again.

As doubts grow about the euro, the dollar, the pound and fiat currencies internationally we expect currency devaluations and currency and gold wars to intensify.

Gold is going from a fringe investment asset to a mainstream store of wealth held by prudent individuals, institutions, banks and nations.

NEWSWIRE
(Bloomberg) -- BofA Favors Gold, Copper for 2013 as Commodities Outlook Neutral
Gold, copper, silver, platinum and palladium will outperform other commodities next year on easing by the U.S. Federal Reserve and supply constraints, according to Bank of America Corp.

“We expect large-scale policy easing by the Fed and the ECB should push gold prices higher,” the analysts wrote, forecasting gold prices at $2,000 an ounce for 2013 and $2,400 for the end of 2014. “A stronger Chinese economy will likely lend support to supply constrained metals next year, and we expect copper prices to average $7,750 a ton in the fourth quarter of 2013.”

Commodities as tracked by the Standard & Poor’s GSCI Spot Index are down 2 percent this year, led by declines in coffee, sugar and cotton. The gauge almost doubled in the three years to 2011 as central banks and governments around the world took action to boost their economies hurt by the global financial crisis in 2008.

Spot gold, up 9.2 percent in 2012, is rallying for a 12th year as central banks join investors buying bullion to diversify assets. Holdings in exchange-traded products are at a record, data compiled by Bloomberg show, and central banks are also adding to their holdings. Silver has “scope” for a 20 percent rally from the current levels, the bank said.

Bank of America expects grain prices to ease gradually into 2013, while “precariously low inventories” can drive prices higher at the start of the year, it said.

(Bloomberg) -- China Oct. Gold Output 34.6 Tons, MIIT Says
China Oct. gold output was 34.6 tons, according to a statement from the Ministry of Industry and Information Technology on its website today.

Fabrication consumption, which includes use in jewelry, electronics and coins, may gain 2.6 percent to 2,715 metric tons in 2013, the report said. Central banks may purchase 450 tons of gold next year from 475 tons in 2012, it said.

South African Gold Output Plunges by 46% as Strikes Close Mines - Bloomberg
COMMENTARY
Calling a peak for gold price could be premature – The Telegraph Italy has only one serious economic problem. It is in the wrong currency – The Telegraph Keiser Report: BIS Warning Of Global Credit Bubble – Max Keiser

SILVER - The People's Metal – You Tube For breaking news and commentary on financial markets and gold, follow us on Twitter.