Following the deaths of three protesters (two from gunshot wounds) after the government crackdown overnight instigated by the increasingly hard-line President Yanuckovich, the streets are becoming markedly more tense and violent. The uprising in Ukraine is not simply one of a youthful population dismayed at not joining Europe. Similar in vein to Thailand's protests, Ukrainians have become disgusted with the corruption in government (and increasingly enraged at Yanuckovich's repressive laws against the protesters). As Martin Armstrong warned recently, "welcome the ticking clock measuring how little time we have until this whole things just goes bust." As the following images of the war-torn-looking streets of Ukraine show, perhaps that clock is closer than many think...

Azarov said earlier on Wednesday that police deployed on the streets did not possess firearms and the interior ministry has denied that police have used guns during the crisis.

In the worst violence that anyone can remember in Kiev, a 200-metre stretch of the city center close to government buildings has been turned into a battle zone as hard-core protesters, ignoring opposition leaders' pleas for calm, have bombarded police with petrol bombs and cobblestones.

Wednesday's violence erupted ironically as Ukraine marked 'National Unification Day' - the day in 1919 which brought together that part of the country that had been under Russian rule with that which had been in the Austro-Hungarian empire.

In a Unification Day message, Yanukovich expressed the conviction that 2014 would be a year of "mutual understanding and frank discussion about our common future".

The President calls for Compromise...

The protest in Ukraine are getting really out of hand. Even the Russians have now said this is too much. Over 100,000 people have responded with violence as the President ignores the people and the corruption is simply our of control. This is turning into war on the city streets. 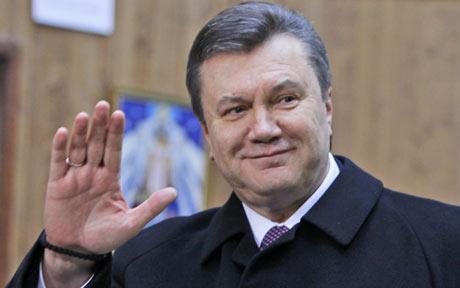 The President Viktor Yanuckovich comes from the East where they speak Russian, not Ukrainian. When he tries to speak Ukrainian on TV, he does not even get the accent down correctly. This is primarily about corruption. However, his repressive laws against the protesters have only brought out more people who see the country headed back into Communism.

But the following images are stunning...

Pro-European protesters take cover behind a burnt bus, with a demonstrator seen on fire, during clashes with riot police in Kiev

Pro-European protesters take cover behind a burnt bus as a demonstrator throws a stick during clashes with riot police in Kiev January 22, 2014. Two demonstrators were on Wednesday reported killed in new anti-government unrest in the Ukrainian capital Kiev, inflaming protesters who confronted police shouting "Murderers" and "Glory to Ukraine!"

and Kiev this morning...