Further proof of manipulation of gold and silver prices - if any were needed - came overnight as  Switzerland’s financial regulator (FINMA) found “serious misconduct” and a “clear attempt to manipulate precious metals benchmarks” by UBS employees in precious metals trading, particularly with silver. 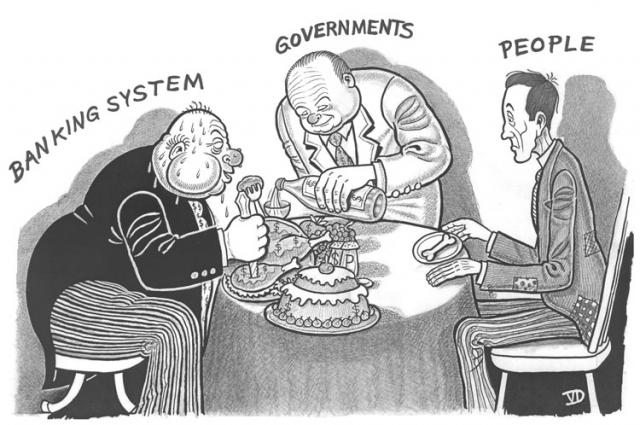 Electronic chats played a “key” role in the improper conduct in foreign exchange and precious metals trading, the Swiss Financial Market Supervisory Authority, or Finma, said in a statement today. It found front running, when traders profit from advance knowledge about a transaction expected to influence prices, over client orders for silver.

Along with other precious metal benchmarks, it has come under increased regulatory scrutiny since the Libor manipulation revelations in the foreign exchange market in 2012.

The Swiss watchdog said earlier that a recent probe showed UBS tried to manipulate foreign exchange benchmarks and staff acted against client interests. It ordered the bank to hand over 134 million Swiss francs ($139 million) in a forex probe.

UBS said in its annual report in May that it had widened an internal probe of its foreign exchange operations to include precious metals trading.

The gold fix was until this year set by five banks via a twice a day conference call. Similar mechanisms existed for silver, platinum and palladium. UBS was not among the fixing members.

Deutsche Bank said in January it was putting its gold fix seat up for sale, but failed to find a buyer, leaving the fixing process with only four members.

Members later announced they would disband the gold fix, which will be replaced later this year by an electronic gold platform operated by U.S. bourse Intercontinental Exchange (ICE).

Switzerland's financial regulator said it would limit bonuses for some UBS employees, as it ordered the bank to disgorge 134 million Swiss francs (138.98 million US dollars) (87.26 million pound) in a foreign exchange trading probe.

The Berne based regulator also said it had begun enforcement proceedings against 11 former and current unnamed UBS employees.

FINMA said variable pay for UBS forex and precious metals employees globally would be limited to 200% of their basic salary for two years. Hardly a deterrent to criminal financial behaviour.

The regulator also said it would introduce an approval process for other high earners at UBS's Swiss investment bank. UBS is also obliged to automate at least 95% of its global foreign exchange trading, FINMA said.

The order by the Swiss regulator is bigger than the 59 million francs in profits demanded in 2012 in order to settle a case over the rigging of the London Interbank Offered Rate (Libor).

Separately, the UK fined five major banks 1.1 billion pounds ($1.75 billion) for “failings” in currency trading in a landmark settlement after a scandal that has roiled the world's largest market.

In what appeared like a coordinated move, the Commodity Futures Trading Commission (CFTC) said it was fining five banks $1.4 billion for attempted manipulation in the foreign exchange market.

The CFTC said traders had used private online chat rooms to communicate. They had disclosed confidential customer order information and trading positions, and altered their positions accordingly to "benefit the interests of the collective group".

Gold priceshave been under increased regulatory scrutiny this year. Barclays Plc was fined 26 million pounds ($43.8 million) in May for manipulating gold prices. The bank claimed the “failures” were due to lax internal controls that allowed a trader to manipulate gold prices rather than a systematic attempt to manipulate the gold price.

Banks continue to get mere slaps on the wrists for breaking the law. Very few traders or bankers have faced prosecution or jail time. Instead, regulators levy completely ineffectual fines that are tiny when compared to their annual bonuses and indeed profits.

As long as this continues, we will continue to see criminal behaviour and banks attempting to manipulate and rig markets at the expense of investors and other financial market participants.

Such behaviour is creating huge distortions in markets and will likely contribute to another financial crash and crisis.

Get Breaking News and Updates on the Gold Market Here

Physical demand for bullion coins and bars has increased and investor interest has picked up marginally after the metals became oversold. The next resistance level is seen at the previous support at $1,180.

The dollar was last at 1.2460 against the euro, up 0.15 cents on concerns that the ECB may introduce fresh monetary easing measures to kick-start the Eurozone’s stumbling economy. Euro gold is well supported at €900/oz and has recovered to €934/oz.

Swiss regulator FINMA said today, "we have also seen a clear attempt to manipulate fixes in the precious metal market (see above)" The Swiss watchdog said earlier that a recent probe showed UBS tried to manipulate foreign exchange benchmarks and staff acted against client interests. It ordered the bank to hand over 134 million Swiss francs ($139 million) in a forex probe.

The London Bullion Market Association (LBMA) will stop producing its gold lending rates data from January 30th as banks shy away from the risks of providing financial benchmarks, a source close to the situation told Reuters today.

The Gold Forward Offered (GOFO) rate is used as a benchmark for dealers, central banks and others to swap gold for dollars. The LBMA currently sets GOFO each day by polling its eight major bank dealers, including UBS and JP Morgan on the rates at which they are prepared to lend gold.

The Bank of England cut its growth forecasts and noted inflation could fall under 1% within months as a renewed slump in the euro area puts pressure on the U.K. economy.

They also said inflation will return to the 2% target in three years, nearly validating investors’ expectations that rate increases may not begin for almost another year. Gold in sterling remains attractive due negative real interest rates and the risk of a renewed bout of sterling weakness in the coming months.