Submitted by Brian Cloughley via The Ron Paul Institute for Peace and Prosperity, 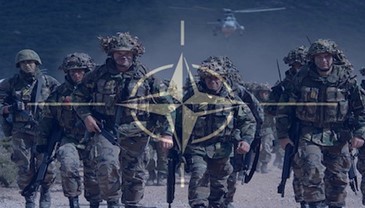 The German city of Frankfurt is continental Europe’s largest financial center and host to the country’s Stock Exchange, countless other financial institutions, and the headquarters of the European Central Bank (ECB) which is responsible for administering the monetary policy of the 18-nation Eurozone. The place is awash with money, as demonstrated by the plush new ECB office building which is costing a fortune.

The original price of the bank’s enormous palace was supposed to be 500 million euros, about 550 million dollars, but the bill has now been admitted as €1.3 billion (£930 m; $1.4 bn). This absurdly over-expensive fiasco was directed by the people who are supposed to steer the financial courses of 18 nations and their half billion unfortunate citizens. If the ECB displays similar skill sets in looking after Europe’s money as it has in controlling the cost of constructing its huge twin-tower headquarters, then Europe is in for a rocky time.

Intriguingly, the Bank isn’t alone in contributing to Europe’s bureaucratic building boom. There is another Europe-based organization of equal ambition, pomposity and incompetence which is building a majestically expensive and luxurious headquarters with a mammoth cost overrun about which it is keeping very quiet indeed.

The perpetrator of this embarrassing farce is NATO, the US-Canada-European North Atlantic Treaty Organization which is limping out of Afghanistan licking its wounds, having been fighting a bunch of sandal-wearing rag-clad amateur irregulars who gave the hi-tech forces of the West a very hard time in a war whose outcome was predictable. But the debacle hasn’t dimmed the vision of the zealous leaders of NATO who are confronting Russia in order to justify the existence of their creaking, leaking, defeated dinosaur. Their problem is not only do they lose wars, but they then look for another one to fight — to be directed from a glittery new and vastly expensive building whose cost has soared above all estimates.

NATO’s operation "Unified Protector" to overthrow Libyan leader Muammar Gadhafi involved a massive aerial blitz of 9,658 airstrikes which ended with the gruesome murder of Gadhafi — and caused collapse of Libya into an omnishambles where fanatics of the barbarous Islamic State are now establishing themselves.

In spite of the horror of NATO’s Libyan catastrophe one does have to have a quiet smile about Ivo H. Daalder and James G Stavridis whose deeply researched analysis in the journal Foreign Affairs in 2012 was titled "NATO’s Victory in Libya." These sages declared that “NATO’s operation in Libya has rightly been hailed as a model intervention . . . NATO’s involvement in Libya demonstrated that the alliance remains an essential source of stability . . . NATO may not be able to replicate its success in Libya in another decade. NATO members must therefore use the Chicago summit to strengthen the alliance by ensuring that the burden sharing that worked so well in Libya — and continues in Afghanistan today — becomes the rule, not the exception.”

Not much is working well in either Libya or Afghanistan two years after the Daalder-Stavridis advocacy of “burden sharing” and it is obvious that NATO has been the opposite of a “source of stability” in both unfortunate countries.

In October 2005 I wrote that “NATO is to increase its troop numbers in Afghanistan to 15,000 and its secretary-general states that instead of acting as a peacekeeping force it will assume the combat role of US troops, which is insane . . .  The insurgency in Afghanistan will continue until foreign troops leave, whenever that might be. After a while, the government in Kabul will collapse and there will be anarchy until a brutal, ruthless, drug-rich warlord achieves power. He will rule the country as it has always been ruled by Afghans: by threats, religious ferocity, deceit, bribery, and outright savagery when the latter can be practiced without retribution. And the latest foreign occupation will become just another memory.”

The number of US-NATO troops in Afghanistan has been reduced from a high of 130,000 to 13,000, of which some 10,000 are US, but NATO’s new headquarters building in Brussels is expanding in both size and cost. The budget for the immense complex was approved at 460 million Euros (500 million US dollars) in 2010 but has now surged to over 1.25 billion Euros, about 1.4 billion dollars.

Germany’s Der Spiegel reported in January that the scandal of the cost overrun was being kept secret by all governments contributing to this redundant organization. A leaked cable from Germany’s ambassador explained that at a meeting of NATO representatives last December they “pointed to the disastrous effect on the image of the alliance if construction were to stop and if NATO appeared to be incapable of punctually completing a construction project that was decided at the NATO summit of government leaders in April 1999 in Washington. The risk of a further cost increase is already palpable.”

The solution to NATO’s self-imposed image problem was simple : the people responsible for managing the affairs of a military alliance involving 28 countries, 3.5 million combatants and 5,000 nuclear weapons decided, as asked by the staff of its Secretary General, to deal with the matter “confidentially.” In other words, the cost overruns and delays in construction are being deliberately concealed from the public in the hope that NATO’s executives will not appear incompetent.

Meantime, while trying to conceal their flaws, faults and failings in management of basic administrative affairs, NATO’s chiefs are squaring up to Russia in an attempt to persuade the world that President Putin is about to mount an invasion from the east. The focal point of NATO’s contrived alarm is the corrupt and chaotic regime in power in Ukraine, which has serious disagreements with Russia and is therefore energetically supported by the United States to the point of distortion, menace, and mendacity.

As reported in the UK’s Daily Telegraph on March 4, the commander of US troops in Europe, General Frederick “Ben” Hodges, has accused Russia of having 12,000 troops inside eastern Ukraine, which was irresponsible nonsense.

Hodges was formerly the army’s Congressional Liaison Officer in Washington where he obviously acquired a taste for political grandstanding, as in a political speech of the sort that generals have no right to make he declared that “We have to raise the cost for Putin. Right now he has 85 per cent domestic support. But when mothers start seeing their sons come home dead, when the price goes up, domestic support goes down,” which was as offensive as it was hostile.

In February the Wall Street Journal reported Hodges as saying “I believe the Russians are mobilizing right now for a war that they think is going to happen in five or six years—not that they’re going to start a war in five or six years, but I think they are anticipating that things are going to happen, and that they will be in a war of some sort, of some scale, with somebody within the next five or six years.” Just what President Putin was supposed to make of that is anyone’s guess — but it is certain that Hodges’ bellicose meanderings did nothing to persuade Moscow that there would be any attempt by the US-NATO coalition to modify its policy of uncompromising enmity.

Other pronouncements by NATO leaders have been equally threatening and intended to convince the public of western Europe that Russia attacked Ukraine.

But even if Russia had indeed invaded Ukraine, it would have had nothing whatever to do with anyone else.

The US-NATO coalition willfully ignores the fact that Ukraine is not a member of either the European Union or NATO and has no treaty of any sort with any nation in the world that would require provision of political, economic or military support in the event of a bilateral dispute with any other country. Yet NATO has seized upon the Ukraine-Russia discord to justify its policy of unrelenting hostility to Moscow.

NATO should have been disbanded at the time of the collapse of the Soviet Union because that threat was the sole reason for its existence; but it decided to multiply membership and extend its military presence closer and closer to Russia’s borders. There is little wonder that Russia is apprehensive about NATO’s intentions, as the muscle-flexing coalition lurches towards conflict.

NATO’S Supreme Commander, US General Breedlove, has also contributed greatly to tension and fear in Europe by issuing dire warnings about Russia’s supposed maneuvers. On March 5 he indulged in fantasy by claiming, without a shred of evidence and no subsequent proof, that Russia had deployed “well over a thousand combat vehicles” along with “combat forces, some of their most sophisticated air defense, battalions of artillery” within Ukraine. This pronouncement was similar to his downright lie of November 18, 2014, when he told the German newspaper Frankfurter Allgemeine Zeitung that there were “regular Russian army units in eastern Ukraine.”

The swell of anti-Russian propaganda, confrontation and attempted intimidation by NATO has increased, and if it continues to do so it is likely that Moscow will take action, thereby upping the stakes and the danger even more. It is time that NATO’s nations came to terms with the reality that Russia is a major international power with legitimate interests in its own region. Moscow is not going to bow the knee in the face of immature threats by sabre-rattling US generals and their swaggering acolytes. It is time for NATO to forge ties rather than destroy them — and to build bridges rather than glitzy office blocks.