Guess What Happened The Last Time Bond Yields Crashed Like This...

If a major financial crisis was approaching, we would expect to see the “smart money” getting out of stocks and pouring into government bonds that are traditionally considered to be “safe” during a crisis.  This is called a “flight to safety” or a “flight to quality“.  In the past, when there has been a “flight to quality” we have seen yields for German government bonds and U.S. government bonds go way down.  As you will see below, this is exactly what we witnessed during the financial crisis of 2008.  U.S. and German bond yields plummeted as money from the stock market was dumped into bonds at a staggering pace.  Well, it is starting to happen again.  In recent months we have seen U.S. and German bond yields begin to plummet as the “smart money” moves out of the stock market.  So is this another sign that we are on the precipice of a significant financial panic?

Back in 2008, German bonds actually began to plunge well before U.S. bonds did.  Does that mean that European money is “smarter” than U.S. money?  That would certainly be a very interesting theory to explore.  As you can see from the chart below, the yield on 10 year German bonds started to fall significantly during the summer of 2008 – several months before the stock market crash in the fall… 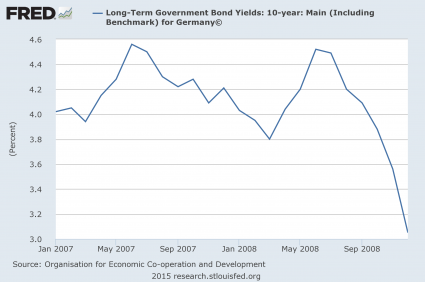 So what are German bonds doing today? 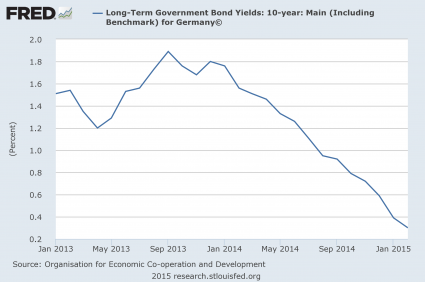 And amazingly, most German bonds that have a maturity of less than 10 years actually have a negative yield right now.  That means that investors are going to get back less money than they invest.  This is how bizarre the financial markets have become.  The “smart money” is so concerned about the “safety” of their investments that they are actually willing to accept negative yields.  I don’t know why anyone would ever put their money into investments that have a negative yield, but it is actually happening.  The following comes from Yahoo…

The world’s scarcest resource right now is safe yield, and the shortage is getting more extreme. Most German government bonds that mature in less than 10 years now have negative yields – part of some $2 trillion worth of paper with yields below zero.

This is what happens when the European Central Bank begins a trillion-euro bond-buying binge with rates already miniscule.

Yesterday, ECB boss Mario Draghi – unfazed by the protest stunt at his press conference – reaffirmed his plan to keep bidding for paper that yields more than -0.2% – that’s minus 0.2%.

Yes, the ECB is driving a lot of this, but it is still truly bizarre.

So what about the United States?

Well, first let’s take a look at what happened back in 2008.  In the chart below, you can see the “flight to safety” that took place in late 2008 as investors started to panic… 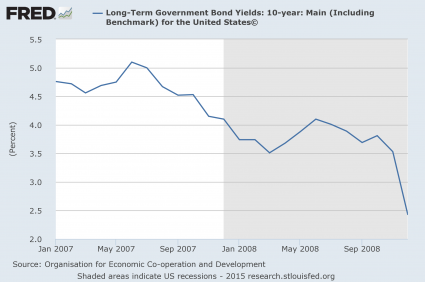 And we have started to witness a similar thing happen in recent months.  The yield on 10 year U.S. Treasuries has plummeted as investors have looked for safety.  This is exactly the kind of chart that we would expect to see if a financial crisis was brewing… 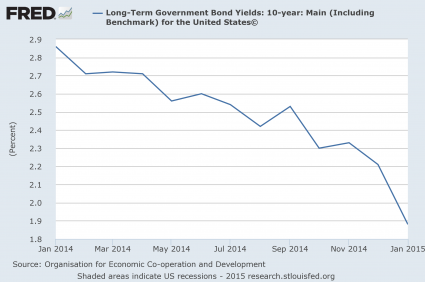 What makes all of this far more compelling is the fact that so many other patterns that we have witnessed just prior to past financial crashes are happening once again.

Yes, there are other potential explanations for why bond yields have been going down.  But when you add this to all of the other pieces of evidence that a new financial crisis is rapidly approaching, quite a compelling case emerges.

For those that do not follow my website regularly, I encourage you to check out the following articles to get an idea of what I am talking about…

-“Guess What Happened The Last Time The Price Of Oil Crashed Like This?…”

-“Not Just Oil: Guess What Happened The Last Time Commodity Prices Crashed Like This?…”

-“Guess What Happened The Last Time The U.S. Dollar Skyrocketed In Value Like This?…”

-“7 Signs That A Stock Market Peak Is Happening Right Now”

Of course no two financial crashes ever look exactly the same.

The crisis that we are moving toward is not going to be precisely like the crisis of 2008.

But there are similarities and patterns that we can look for.  When things start to get bad, investors act in predictable ways.  And so many of the things that we are watching right now are just what we would expect to see in the lead up to a major financial crisis.

Sadly, most people are not willing to learn from history.  Even though it is glaringly apparent that we are in a historic financial bubble, most investors on Wall Street cannot see it because they do not want to see it.  They want to believe that somehow “things are different this time” and that stocks will just continue to go up indefinitely so that they can keep making lots and lots of money.

And despite what you may think, I actually want this bubble to continue for as long as possible.  Despite all of our problems, life is still relatively good in America today – at least compared to what is coming.

I like to refer to this next crisis as our “third strike”.

Back in 2000 and 2001, the dotcom bubble burst and we experienced a painful recession, but we didn’t learn any lessons.  That was strike number one.

Then came the financial crash of 2008 and the worst economic downturn since the Great Depression.  But we didn’t learn any lessons from that either.  Instead, we just reinflated the same old financial bubbles and kept on making the exact same mistakes as before.  That was strike number two.

This next financial crisis will be strike number three.  After this next crisis, I don’t believe that there will ever be a return to “normal” for the United States.  I believe that this is going to be the crisis that unleashes hell in our nation.

So no, I am not eager for that to come.  Even though there is no way that this bubble of debt-fueled false prosperity can last indefinitely, I would like for it to last at least a little while longer.

Because what comes after it is going to be truly terrible.