It is not surprising that in a few short months Yanis Varoufakis has proven himself to be a thoroughgoing Keynesian statist. After all, what would you expect from an economics PhD who co-authored books with Jamie Galbraith? The latter never saw an economic malady that could not be cured with bigger deficits, prodigious printing press “stimulus” and ever more intrusive state intervention and redistribution.

In what is apparently a last desperate game theory ploy, however, Varoufakis has done his countrymen, Europe and the world a favor. By informing his Brussels paymasters that they must continue to subsidize his bankrupt Greek state because it is the only way to preserve the European Project and vouchsafe the Euro, the Greek Finance minister blurted out the truth of the matter, albeit perhaps not intentionally:

“Whatever some analysts are saying about firewalls, these firewalls won’t last long once you put and infuse into people’s minds, into investors’ minds, that the eurozone is not indivisible,” he added.

He sure got that right. People who believe in democracy and economic liberty anywhere in the world should pray for a Graccident. During the next several weeks, when $1.8 billion in IMF loans come due that Greece cannot possibly pay, there will occur a glorious moment of irony for Syriza.

If it holds firm to its leftwing statist agenda and takes Greek democracy back from the clutches of the EU/IMF apparatchiks, Syriza will strike a blow for democracy and capitalism in one great historic volte-face. That is to say, defiance of the Germans and the troika would amount to a modern monetary Marathon; it would trigger a thundering collapse of the ECB and the cancerous superstate regime built upon it in Frankfurt and Brussels—–and, along with it, cast a mortal blow upon the worldwide Keynesian central banking regime, too.

The hour comes none to soon. In a few short years under Draghi and in the context of Europe’s fiscal and economic enfeeblement, the ECB has been transformed into a hideous reverse Robin Hood machine. So doing, it has gifted financial gamblers and front-runners with hundreds of billions of ill-gotten gains in the euro debt markets.

In the days shortly before Draghi issued his “whatever it takes” ukase, for example, the Italian 10-year bond was trading at 7.1%. So speculators who bought it then have made a cool 350% gain if they were old-fashioned enough to actually buy the bonds with cash. And they are laughing all the way to their estates in the South of France if their friendly prime broker had arranged to hock these deadbeat Italian bonds in the repo market even before payment was due. In that case, Mario’s front-runners are in the 1000% club and just plain giddy.

While it is extremely difficult to think of a reason that would justify such wanton redistribution to financial gamblers, the ECB rationale is so astoundingly threadbare as to be laughable. In a word, Draghi and his minions claims that Europe’s economic torpor stems from too little inflation and too little borrowing by private households and businesses. Hence, they have no choice except to drastically falsify prices in Europe’s entire $20 trillion bond market in order to rekindle 2% inflation and get economic growth off the flat line.

Oh, puleeze. The Eurozone economies have had no problem whatsoever in generating an ample quotient of inflation ever since the inception of the single currency—-as if that had anything to do with the growth of real production and wealth anyway.

In fact, the european CPI has gained an average of 2.1% per annum during the last decade and one-half. Self-evidently, the temporary flattening of the inflation curve in the last year is a consequence of the plunge of oil and other commodity prices, not anything that could possibly account for Europe’s languishing growth rate.

In fact, the euro area core CPI is up by nearly 1% during the last year, and has gained about 1.5% per annum during the past eight years during which time global oil prices have soared and collapsed twice. Quite simply, low-flation is a myth invented by the Keynesian money printers to justify massive monetization of the public debt.

So there is really nothing behind the low-flation mantra except the spurious argument that consumers will defer purchases unless assured that prices will continue to rise and eat away at their paychecks.

No, Mario, European consumers are not spending owing to the fact that their incomes are not growing. Household “demand” is tepid because take home pay everywhere in the eurozone is being eviscerated by high taxes. And consumers are not borrowing because their balance sheets are already saturated with more debt than they can sustain.

Indeed, private sector borrowing nearly tripled during the decade before the financial crisis. That it has flattened out since then only means that the supply of credit worthy borrowers has been exhausted, not that there exists some mysterious economic malady that can be cured by the ECB’s printing press.

Stated differently, even after accounting for the stagnation of loan growth in the last few years, private sector loans outstanding still represent a 6.0% per annum gain since 1997. And that compares to an average nominal GDP growth rate in the eurozone countries of just 3.3% annually. At some point, every debt addicted economy runs out of balance sheet runway——a condition that Europe attained long ago.

The good thing is that this whole misbegotten euro project cannot survive the impending Greek default. The ECB alone is now on the hook for $138 billion of Greek liabilities—–an amount that is equal to the remaining deposits in its entire banking system. Needless to say, when the impending “Graccident” explodes onto the front pages, there will be pandemonium at the ECB, and in Brussels and capitals throughout the 19-nation Eurozone.

Did the German politicians and voters really understand that their Bundesbank representatives in Frankfurt were not ferocious watchdogs of monetary rectitude after all; and that in crab-like fashion they backed their nation’s central bank into $35 billion of liabilities——–debts that are owed by a Greek banking system and central bank that is hopelessly insolvent?

No, the Greek banking system is actually such a complete financial zombie as to make the US savings and loan industry of the late 1980s look like a paragon of financial health in comparison.  For crying out loud, most of the Greek banking system’s so-called “capital” consists of deferred tax assets; and the collateral posted for its $87 billion of ELA loans consists of  the debt and guaranteed bonds of a Greek government that is self-evidently insolvent.

Never has such a gargantuan scam been pulled off in plain sight by official national and superstate institutions. Never has a central bank accepted such outright financial trash as collateral for massive advances to its member banks.

Yet week-by-week the clueless apparatchiks in Frankfurt have been metering out a couple of billions of ELA funding to keep the Greek banking zombie alive. When the scam finally blows, there will be a witch-hunt in the halls of the ECB’s grandiose new $2 billion palace like Europe hasn’t seen in generations. 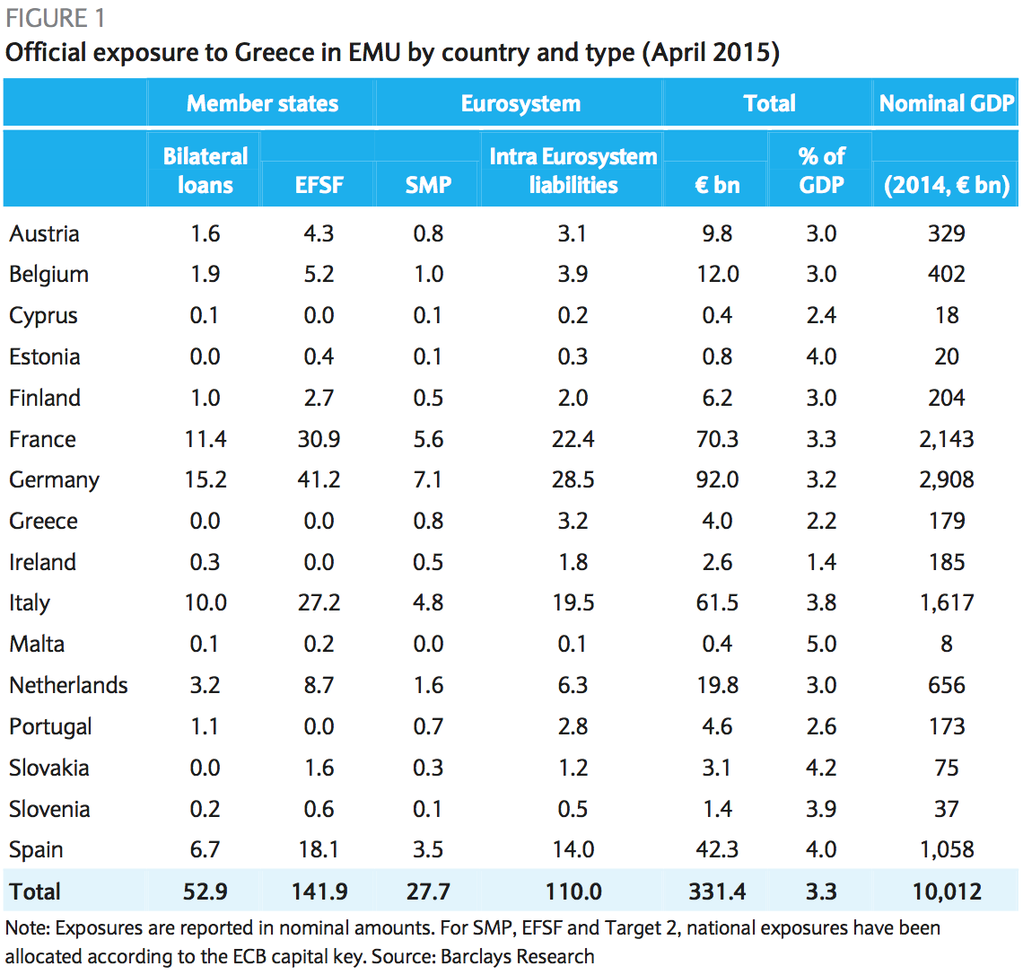 The fact is, the ECB can’t survive the coming Graccident. It will not only be technically insolvent, but, more importantly, it will also be stripped of every vestige of credibility. How in the world, it will be demanded, did Draghi and his clueless posse loan $138 billion to the massively insolvent banking system of a bankrupt economy which is on the verge of economic and civic anarchy?

Moreover, it will also become swiftly evident that there was no Draghi miracle at all—-just a giant, preposterous con job. Accordingly, the front runners parade of the last three years will turn into a panicked selling rout among the fast money gamblers who have made a killing on paper, and the dim-witted bond managers and European bank investors which went along for the ride.

The truth is, Europe is a socialist fiscal time bomb waiting to explode. There is not one honest price left in the European sovereign debt market, including the 10-year German bund trading at 58 bps. Its all been an illusion conjured by the foolish Mario Draghi, who had no clue that all that soaring peripheral debt about which he was taking endless victory laps was actually being rented by the day by heavily leveraged speculators with their fingers on the sell button.

In short, when the taxpayers of Europe wake up to the $350 billion euros they have loaned the bankrupt state of Greece, and when the feckless politicians of Spain, Italy, Portugal, France and much of central Europe discover they can’t fund their bloated state budgets with 1% money after all, the financial furies will be unleashed throughout the continent.

Nor is there any hope for escape. The euro-19 area is now close to having a 100% debt to GDP ratio, and that’s flattered by German surpluses from an export boom that is rapidly cooling, and the fact the for a few quarters Mario’s printing press has conferred huge interest rate subsidies on their depleted fiscal accounts.

The pending Graccident will puncture that illusion, tipping most of Europe into acute fiscal crisis and political upheaval of the type that has already roiled Greece and was starkly evident in Spain’s elections last weekend. The odds that the European superstate and the ECB’s Keynesian monetary regime will survive the resulting upheaval are, thankfully, somewhere between slim and none.

And there is a silver-lining, too.  Someday the historians will point to the image below and say that the end game of Keynesian central banking started here. It could not commence too soon.