The robo-machines are now having a grand old time hazing the August lows at 1870 on the S&P, and may succeed in ginning up another dead-cat bounce or two. But this market is going down for the count owing to a perfect storm.

To wit, the global and US economies are heading into an extended deflationary recession; S&P earnings peaked at $106 per share more than a year ago and are already at $90, heading much lower; and the central banks of the world are out of dry powder after a 20-year binge of balance sheet expansion. The latter is surely the most important of the three. It means there will be no printing press driven reflation of the financial markets this time around. And without more monetary juice it’s just a matter of time before a whole generation of punters and front-runners abandon the casino and head for the hills.

Even with yesterday’s ragged bounce, the broad market has now gone sideways for nearly 700 days. The BTFD meme is loosing its mojo because it only worked so long as the Fed-following herd could point to more printing press cash flowing into the market or promises of “accommodation” that were credible.  But that will soon be ancient history. 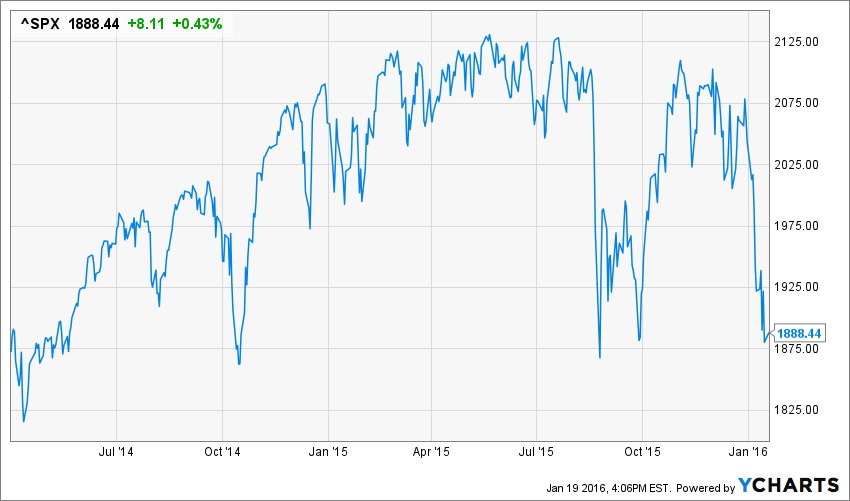 Indeed, it is already evident that “escape velocity” has again escaped. Q4 GDP growth is now running at barely 0.5%, and the current quarter could actually be negative for reasons we will analyze in the days ahead.

But the real economic situation is actually worse than the apparent flatling trend of recent months. As we have long insisted, the GDP does not measure true gains in national wealth or main street living standards.

That’s because even though you can borrow your way to a higher GDP print, as the US did through an explosion of household borrowing in the 20-years prior to the 2008 crisis, or as China and its EM supply convoy did in the business sector during the last seven years, that only pulls activity forward in time.

At the towering levels of debt which exist in the world today, however, borrowing does not create new wealth; it only mortgages future income.

Indeed, with $220 trillion credit outstanding on a worldwide basis, we have reached “peak debt” for all practical purposes. That means, in turn, that much of the recent accretion of the world’s $78 trillion of GDP represented household consumption growth that cannot be sustained and business sector malinvestments that will lead to losses and write-offs. In this context, the great commodities crash now underway does not represent some isolated commodity super-cycle that will soon run its course and be gone; it is just the opening wave of a long-term deflationary epoch that is already generating a CapEx depression and shrinking profits and wages in the sectors that led the boom over the last two decades.

That’s why the Wall Street narrative being thrown up against the worst start to a year in market history is so superficial and unpersuasive. It reassures that the only thing going on is a temporary pause due to the commodity plunge and the EM slowdown, and that this is all just a matter of “transition”.

To wit, China is purportedly just working through a soft patch as it goes from an export and fixed asset investment driven economy to one based on consumption and services. But in a few years they will be shopping until they drop in China just like they do here.

No they won’t. China does not even remotely resemble the simulacrum of capitalism that still exists in the US. Instead, it is the most fantastical state driven house of economic cards in recorded history, and it is heading not for a “transition” but a thundering crash landing.

Why does every small miss to the expected macroeconomic results cause endless Wall Street chatter about more “stimulus” from Beijing, as occurred owing to the dismal reports issued last night?

The short answer is that Wall Street’s Keynesian chorus cannot grasp the fact that there is such a thing as a collective balance sheet and that it can get used up. Moreover, when that happens there is no more effective “stimulus” to be had—-it just results in central banks pushing on a string.

It should be patently obvious by now that China is trapped in exactly that dead-end, and that the Red Suzerains of Beijing are swamped in paralysis and confusion. After all, ramping China’s debt from $500 billion or so in 1995 to $30 trillion today wasn’t so hard or even worrisome if you do not understand that a Ponzi scheme will eventually blow-up.

What’s a 60X increase in debt if most of its is held by state banks? Especially when they are commanded to sweep bad loans under the rug and to facilitate the achievement of top-down GDP targets at all hazards?

Certainly Mr. Deng had no clue about the limits to debt when he discovered the printing press in the basement of the PBOC in the early 1990s and implicitly declared that to become rich by borrowing is glorious. Nor did his successors, who cling to the communist party’s tenuous monopoly on power by burying themselves ever deeper under new debt infusions to keep the scheme going whenever activity begins to falter.

So I truly believe that China’s rulers do not understand the debt monster they have unleashed. As they attempt to wrestle with it, therefore, their actions will become increasingly desperate, unpredictable, inconsistent, spasmodic and short-lived.

Needless to say, that will scare the bejesus out of the boys and girls in the global casinos who are under the egregious misimpression that a command and control state economy works and that the communist party hacks who are in charge in Beijing know what the are doing.

Au contraire! It is actually the Wall Street economists and bullish strategists who have been clueless all along about what the Red Ponzi is and where it is heading. Like Keynesians everywhere, they have falsely assumed that balance sheets have unlimited capacity to shoulder debt, and that rising debt is unequivocally good because it adds to “aggregate demand” and a higher GDP print.

Worse still, they suffer from the delusion that these debt bloated levels of GDP are here for good and can’t retract. Or that they won’t so long as more “stimulus” is added as needed.

Stated differently, the sum of GDP is held to be like some giant bathtub of fungible units called “aggregate demand”; they can be re-allocated but they are indestructible and can’t diminish.

Accordingly, the so-called “transition” in China is simply about the state’s deft redirection of some of these fungible units of demand from the fixed asset sector to consumption and services.  Other than temporary disruptions due to retraining workers and redirecting the flow of capital investment from steel mills to restaurants and shopping emporiums its all a matter of correctly managing the economic plumbing.

No it’s not!  There is no zero sum game in economics—–and most especially in an economic system that have been bloated, deformed and destabilized by a mindless, financially undisciplined eruption of debt for more than two decades.

What happens in those circumstances is that there are massive dead weight losses. Productive assets are abandoned and written off; entrepreneur’s profits and worker incomes collapse; business and public support infrastructure like trucking services and highways fall into disuse; debts are defaulted upon, causing losses of lender capital; and business confidence and animal spirits take a beating.

Yet the Great Depression happened not because Hoover tried to balance the budget rather than incur fiscal deficits; or because the Fed didn’t engage in massive quantitative easing in 1930-1932 as Milton Friedman and his disciple, Ben Bernanke, have falsely claimed.

No, it happened because the US export sector in the industrial heartland from Pittsburg to Peoria got drastically over-built in response to booming but unsustainable global demand for US exports funded by debt raised on Wall Street during the 1920s; and because the farm belt from the Carolinas to California got massive overinvested when Washington’s war loans during 1915-1920 turned it into the granary of the world.

The Great Depression happened because massive malinvestments were written down, over-built auto, steel, chemical and machinery capacity was idled, CapEx was dead in the water for a decade, and redundant farm acreage and populations were forced off the land by low prices and insolvent debts.

There was no cure for the liquidation and bust then—-except to have avoided the state induced booms in the first place.

There is still none now—–but the Hoovervilles this time will be in the land of the Red Ponzi. And the liquidation bust there will make the US depression of the 1930s look like a walk in the park.

So what happens when China’s oil demand drops by several million barrels per day?

Possibly crude oil goes into the teens, and $5 trillion worth of so-called sovereign wealth funds in the Gulf oil states and elsewhere—-which are chock-a-block with DM equities and bonds—-are abruptly liquidated to pay host country bills.

Likewise, what happens when the financial asset owning class of the world takes a deep hit to their portfolios on account of sell-offs triggered by sovereign wealth fund liquidations and front-runners fleeing the casino?

Is there a reason Tiffany’s is hitting the skids? Does Tesla seem a tad overvalued? Is upper end NYC real estate suddenly dead in the water?

Don’t ask the clueless fool who got us into this catastrophic mess. Ben Bernanke says China’s $30 trillion of debt has nothing to do with it.

He still insists there is a “savings glut” in China and the EM, and apparently Yellen and here posse agree.

So, as we said, now comes the deluge.