GDP growth has only two basic components: growth in productivity and growth in the workforce size. That’s it. There are two and only two ways you can grow an economy: increase the (working-age) population or productivity.

There is no magic fairy dust you can sprinkle on an economy to make it grow. To increase GDP you have to actually produce more. That's why it's called gross domestic product.

Therefore—and I'm oversimplifying quite a lot here—a recession is basically a decrease in production (as, normally, population doesn't decrease). Two clear implications emerge: The first is that if you want the economy to grow, there must be an economic environment that is friendly to increasing productivity.

Productivity growth, unfortunately, is slowing down in much of the developed world and there’s no reason to think the trend will change soon.

Let me offer a few rather disconcerting charts showing the continuing decline in productivity and major shifts in demographics that are worsening the situation. 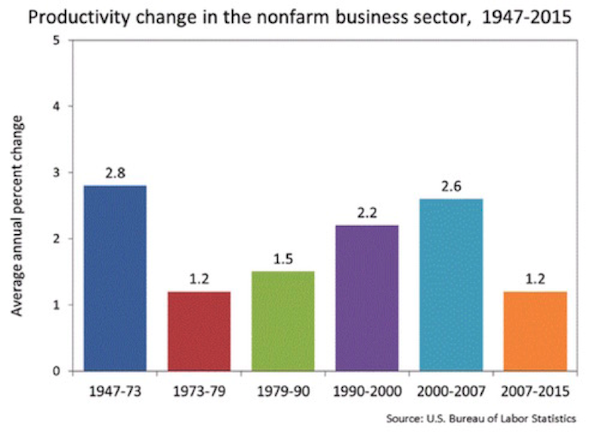 Productivity grew only 0.6% over the last two years

The next chart shows that actual productivity has grown less than 0.6% in the last two years. The numbers suggest that productivity growth has become hard to achieve in the developed world.

Part of the problem for the developed world is that the services sector makes up much of its economy.

Getting higher productivity in dry cleaners, restaurants, and hairdressers is much harder than it is in manufacturing or in agriculture. While productivity grows in the services sector, that sector alone cannot deliver significant increases in the overall productivity rate.

Now, let’s look into major demographic trends to understand the roots of this slowdown.

Working-age populations are shrinking and the dependency ratio is growing

Here’s a chart from Eurostat on the projections for the EU population from 2014 to 2080.

Why does it level out? The forecasters basically assume that birthrates won’t drop much lower and that there is a limit on how long people will live. But in this next chart, we see the steep rise in the percentage of the elderly compared to those of working age, all over the developed world. 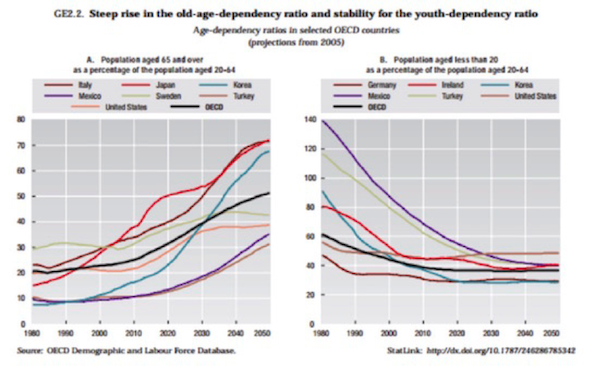 The number of children (ages 0–20) changes only slightly in the decades to come.

In 2014, 66% of the EU working population supported the 34% who were not working because they were either too old or too young. By 2040, the EU is projected to have 58.5% working to support 41.5% who are dependents. About two-thirds of the dependents will be those age 65 and over.

Active labor force in the US has plunged

The participation rate is a measure of the active portion of an economy's labor force. It defines the percentage of the population that is either employed or actively looking for work. 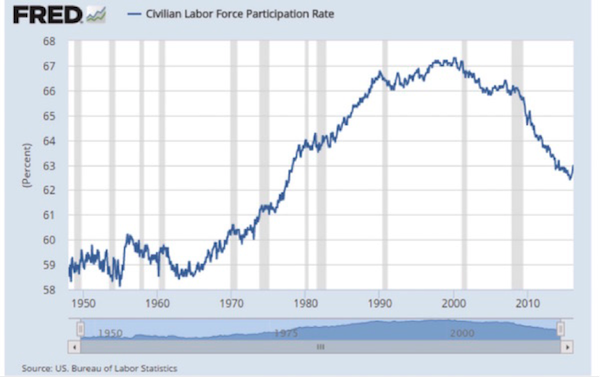 This rate has been falling since 2000. A big part of the drop-off reflects Boomers retiring, but there is something odd going on besides it.

We see a decline in the participation rate of 25 to 54 year-olds (prime working age), though the rate for this group had risen continually for 50 years. 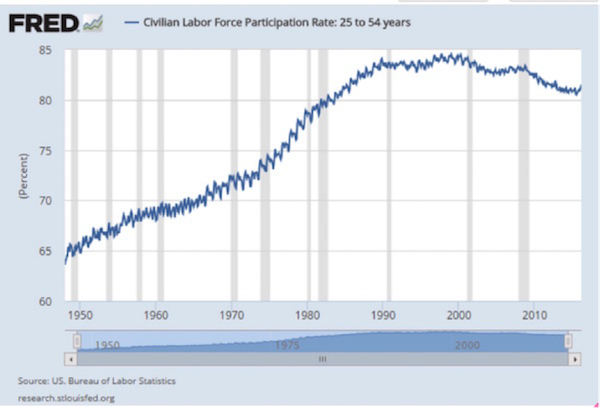 And now we delve into an even stranger phenomenon. Young people, 20 to 24, are increasingly opting out of the workforce. 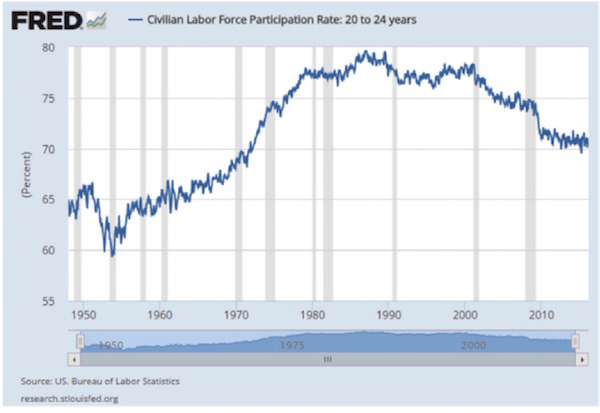 Research tells us that a lot of those people are still going to school. But there are other things happening here, and we need to try to understand them.

Look at this chart from the Atlanta Fed. 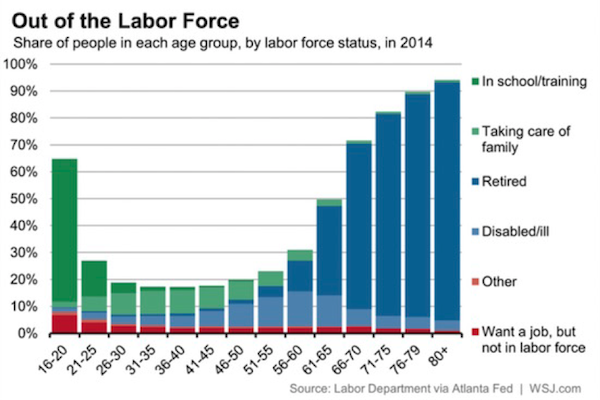 Notice how many young people are out of the labor force because they are taking care of family. That brings us back to the increasing dependency ratio I talked about earlier. It also shows that shrinking working-age populations already have a visible impact on economic growth.

Here’s a chart that wraps up everything. 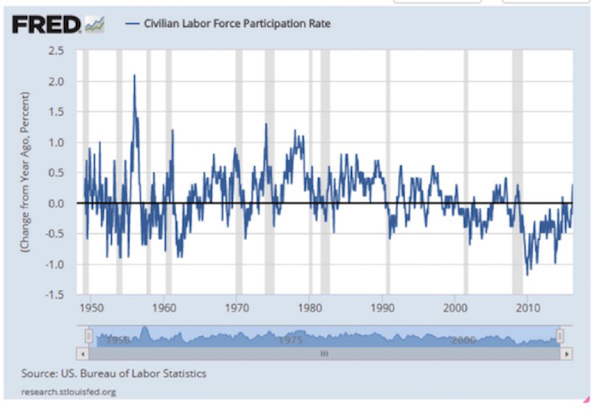 This one shows the percentage change in the labor force participation rate year over year. The rate has declined since the late 1970s, except for a few years of very modest growth within the last 16 years.

The trends we have looked at are not likely to change much, which means we are facing a long period of restrained GDP growth throughout the developed world.

This demographic cast iron lid on growth helps explain why the Federal Reserve, ECB, and other central banks seem so powerless.

Can they create more workers? Not really. They can make a few adjustments that help a little—confident consumers are more likely to have children, but it takes time to grow the children into workers.