he old Wall Street expression is “They don’t ring a bell at the top.” This snarky adage is usually employed by those saddened financial managers who ride a successful investment to a peak and then watch in horror as it reverses course to a level below their cost basis. They lay the blame at the feet of the amorphous market that failed to signal it was time to exit the ride.

A pity this notion is misguided, since the market frequently “rings the bell.” It is just that most market participants are not listening. Perhaps they should be listening now.

Duration risk is usually measured as a function of the shape of the yield curve (as opposed to yield level): the greater the absolute shape (steep or inverted), the larger the embedded risk of an interest rate change. (See Viewpoint – October 2014, “ Financial Market Cognitive Dissonance.”) An investment’s credit risk tends to be assessed via its spread to a benchmark Libor rate. Finally, an investment’s convexity risk, often associated with its exposure to path dependency (via embedded or explicit optionality), is usually summarized as a single measure of implied volatility.

And despite the seeming dissimilarities, these risk vectors have exhibited a relationship over the moderate horizon as active investment managers change their risk allocations to optimize along the efficient frontier. 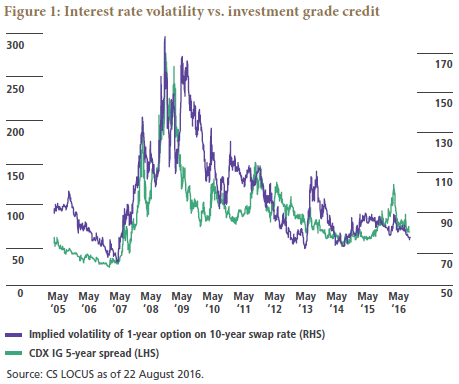 While there are some lead/lag moments as well as a few false divergences, generally these two risk vectors move in tandem over a horizon. 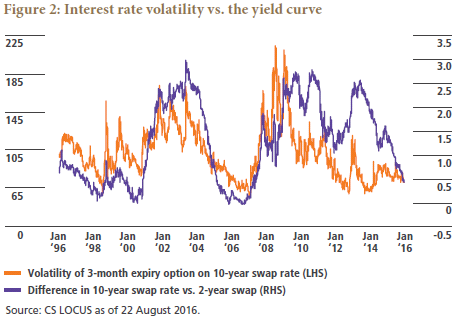 As a prelude to our conclusion, a careful eye will notice that the last time the interest rate term surface and implied volatility compressed together at better than one standard deviation below their long-term averages was soon before the global financial crisis kicked off with the June 2007 collapse of the Bear Stearns hedge funds – but let’s not put the cart before the horse.

The financial markets are at present confounded by a plethora of uncertainties that once again prove truth is stranger than fiction. Over one-third of European and Japanese sovereign debt sports a negative yield – an unprecedented occurrence. While not causal, this rate structure likely is tangentially related to both Brexit and the divisive U.S. presidential election. Thus the conundrum of a road ahead that is full of potholes even as many financial risk measures are near their historical lows.

Of course, investment professionals know the proximate cause: financial repression by the G7 central banks. As a reminder, there are only two realistic avenues out of a debt crisis – default or inflate – and inflation is just a slow-motion default. So the plan was simple: Increase monetary velocity via financial repression to create inflation, depreciate nominal debt and deleverage both the public and private economies. The implicit purpose of quantitative easing (QE) and a zero interest rate policy was to generate asset substitution; that is, to encourage investors to switch from painfully low-yielding but “risk-free” cash or sovereign debt to other assets that would more fully support economic growth. (Of course, this does invite the question as to whether a sovereign bond with a negative yield is “risk-free.”)

Notwithstanding a few catcalls, most agree that these policies have so far been quite effective. The concern is that medicines, whether pharmaceutical or financial, should have a prescribed dosage that cannot be exceeded. This should be especially true for home remedies like QE that have only recently been advanced to wider Phase II trials.

Investment managers who a scant nine years ago promised to never again “keep dancing while the music is playing” are now waltzing with 30-year U.S. Treasury securities at 2.25% and selling both interest rate and equity options (both explicitly and implicitly) at prices that leave little room for error. The huckleberry line in Figure 3 is the well regarded CBOE Volatility Index (VIX) risk metric. Its recent close below 11.5 should be alarming for any risk manager. 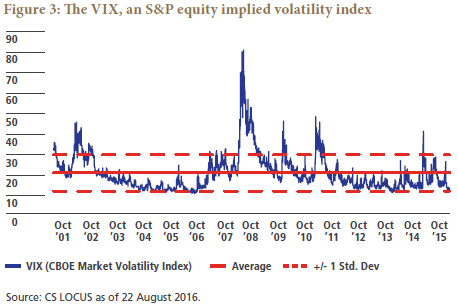 Active investment professionals recognize the relationship between risk and return and adjust their portfolios to maintain an optimal balance. The problem confronting managers now is that financial repression is clouding the window such that it is difficult to discern whether market signals are fundamental to the economy or technical due to central bank intervention.

Ever since Paul Volcker “whipped inflation now” Wall Street denizens have focused primarily on the path of the Federal Reserve Bank-controlled federal funds rate as the main driver of financial risk. To avert moral hazard, the Fed kept its communications relatively opaque; thus, the duality that both realized and implied risk metrics remained somewhat elevated. This changed in June 2004, when the Fed commenced a rate hiking path at what they said would be “a measured pace.”

It seems the Fed wanted to communicate a steady rise to avoid a repeat of the 1994 surge in volatility. (This concern was not unfounded, given that the duration gap of the government-sponsored enterprises was quite unstable at the time.) But no good deed goes unpunished, as the 17 sequential rate nudges from 2004 to 2006 (see goji berry line in Figure 4) had the unintended consequence of encouraging excessive risk taking. 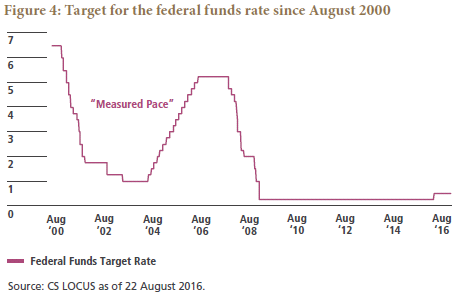 A “measured pace” path to higher rates diminished fears of a Fed surprise and emboldened investors to reduce their hedging programs; as such, it was not a coincidence that record low readings of both the VIX and the MOVE interest rate volatility index soon occurred. As night follows day, both investment grade and high yield credit spreads reached their nadirs, and the yield curve became totally flat.

The compression of the risk versus return metric left little room for error if a change in the investment environment occurred. Consequently, I would suggest that the severity of the global financial crisis was exacerbated by the many portfolios that became unbalanced by being long too much credit or short too much convexity. And most salient to this discussion, a compression of these risk metrics is a symptom that many portfolios are vulnerable to a sharp change in the macro environment.

To be clear, I am not suggesting an imminent repeat of the financial crisis; however, the three main risk metrics – duration, credit and convexity – have all compressed greatly since their recent peaks in February. Specifically, the VIX, the MOVE, and the yield curve are all at least one standard deviation away from their long-term averages. Only credit is not completely off-kilter, at 0.4 standard deviations from its average.

Central banks (with good reason) have taken monetary policy to uncharted territory, demographic trends still have seven to nine years before they reverse, and our politicians may take us down an unexpected path, but my mantra is unchanged: “It is never different this time.” So while these risk signals may be more policy-driven than fundamental, I can assure you the tides of risk will flow eventually.

Cinderella still has time to find that glass slipper, as the clock has not yet rung its final chime. But let there be no doubt that the bells have begun to toll – are you listening?