Non-confirmations by the NYSE Advance-Decline Line of new market highs have often signaled major trouble for stocks – will it be the case this time?

In some ways, the post-election “Trump Rally” has been among the most explosive stock market bursts of all time. Depending on the market sector or style, some bounces have been multiple standard deviations beyond anything we’ve seen in years. This has left us, naturally, with many attractive-looking charts of stocks, indices, etc., hitting new highs. But as with any rally, this one isn’t “perfect” from a technical perspective. And among the imperfections is a potentially significant one: the lack, as of yet, of a new high in the NYSE Advance-Decline Line. If you’ll recall, the Advance-Decline Line, or A-D Line, is a cumulative running tally of NYSE Advancing Issues minus Declining Issues on a daily basis. Now, regarding the non-confirmation, or “divergence”, there are plenty of reasonable caveats which we will touch on below. First off, however, why are such divergences potentially significant? Generally speaking, as we are big proponents of strong market breadth within a rally, we like to see the A-D Line going to new highs along with the indices. That suggests that there is strong participation among stocks in bolstering the rally.

From a technical perspective, a non-confirmation by the A-D Line has historically been a significant warning for stocks – at times. Specifically, as we have mentioned before, every cyclical top in the S&P 500 in the last 50 years has been accompanied by a divergence in the A-D Line. Now for the caveats: 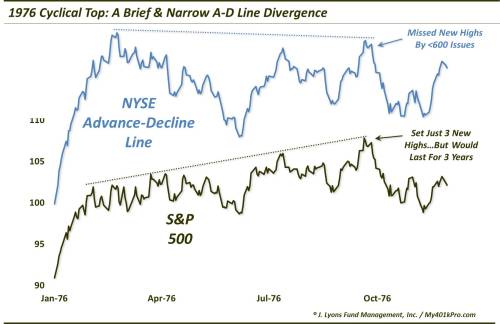 Lastly, we are aware of the abundance of non-equity, bond-like Issues listed on the NYSE. And these Issues certainly haven’t had a good run of it since the election. However, while it is as reasonable as any other period in memory to place an asterisk next to the A-D Line divergence given the recent rout in bond funds, we would be careful not to write off the signal entirely. The fact is there has been a proliferation of bond-type Issues on the NYSE for some time and yet the confirmation/divergence signals based on the A-D Line have continued to be relevant and valid. Thus, again, we would not be too quick to dismiss developments surrounding the A-D Line out of hand.

So, are divergences in the NYSE Advance-Decline Line significant? In our experience, there are no divergences that are more consequential. However, A) not every divergence ends up being significant, and B) this divergence is very young and may just need a few more days for the broad market to catch up to the S&P 500. Additionally, the beatdown among bond-type Issues has unquestionably had a negative effect on NYSE breadth stats. All that said, there are a few signals that put us on alert whenever they pop up. A divergence in the NYSE A-D Line is one of them, no matter the circumstances.