The Obama administration has a tendency to conflate the strong performance of Fed-induced "assets bubbles" with "strong economic growth."  Unfortunately, as is often the case these days, the "hard data" paints a slightly different picture than the "narrative" being pushed by Obama and his staff.

Per a new report from the Pew Research Center, and as our readers are undoubtedly aware, home prices have indeed recovered to pre-recession levels with a little help from Janet Yellen and crew. 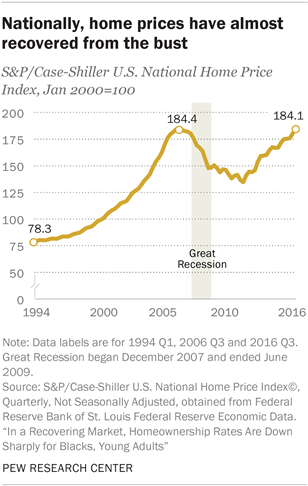 That said, the Obama narrative breaks down from there as further research readily reveals that home prices have recovered despite a massive drop in overall homeownership rates.

Moreover, the folks that seem to have been hit the hardest are the ones that were the biggest supporters of Obama's "Hope & Change" agenda.  Per the table below, homeownership rates among "Young Adults" and "Blacks" are down 18% and 16%, respectively, since the peak in 2004.  And while that's definitely a big "Change," its somewhat lacking on the "Hope."

But if "mainstreet" Americans didn't drive Obama's housing recovery then who did?  Perhaps the following Bloomberg headline can help answer that question:

Yes, the benefits of Obama's "housing recovery" accrued to none other than his "archenemy," Wall Street, which poured $100's of millions into single-family houses on a weekly basis and $10's of billions over the past couple of years.

Adding insult to injury, this massive pace of investment has re-inflated the housing price bubble, making it, once again, nearly impossible for "Young Adults" and "Blacks" to afford homes.  And, unlike in 2007 when subprime lending basically erased the need for down payments, homebuyers today are forced to "have some skin in the game" before banks will blindly give them $100,000's of dollars.

But, with the average American having about $3,000 in "financial assets," we're not sure that's feasible.

But, as we always say, who needs facts when narratives are so much more fun.