Trumpenstein ! Who Created Him and Why?

Trumpenstein ! Our Creation - Foretold 157 Years Ago

The election of Donald Trump has cast the political elite around the world into a state of shock. His arrival, so soon after the titanic Brexit vote, has profoundly undermined the neo liberal political status-quo that has dominated western economies over the past 30 years. What was unthinkable has become reality and the future is as uncertain as it has ever been. However, his election was foretold 157 years ago by the English philosopher John Stuart Mill. As such, the conditions and causes that ushered in the Trump era could not have been clearer.

In an echo chamber of neo liberal ideology, the cosy cartel of press and politician alike traded information, scoops and leaks back and forth with ease. They became blinded to growing discontent, the numbers of disconnected and the genuine concerns of a growing mass of minorities within our society.

For decades, their concerns have been largely ignored as globalisation and liberal economic policies reduced their financial security, buffeted their communities and increased the debt burden which they have been forced to take out.

In his book "On Liberty" Mill warned about this effect where a majority within a democratic society can behave tyrannically against the genuine beliefs and concerns of the minority, depriving both sides the right to debate and refute arguments and thus prompting the loss of democratic cohesion.

Many highly informed politicians, historians, business people and everyday folk have for decades thought that the circumstances that brought the world to war in the 1930’s could never be repeated. They believed that by building so-called free and inclusive societies, where an individual could associate, speak and choose how to live their life freely and democratically, the conditions would be created where economic progress would be all but assured.

But Mill argued that this is not enough, society must actively support the minority’s right to express all concerns no matter whether the belief is right, wrong or even dangerous.

The reason for Trump’s arrival are numerous, primarily though they are based on deep social undercurrents that have been building for many years and have been hiding in plain sight.

His election is less about the rise of a new way or a new republican political corporatism, where billionaires are suddenly seen as political saviors, but rather it is more to do with high levels of deep anxiety, frustration, isolation and social dissension where swathes of western populations have been politically, economically and socially left behind and/or ignored by globalisation and its neo-liberal cheerleaders, press and politicos alike.

Make no mistake, Donald Trump is an anti-candidate; anti-status quo, anti-elite, anti-liberal. His election is a demand for attention, for debate and for dialogue from those who have been ignored and bypassed. In time his election may well be seen as one of the finest demonstrations of democratic principles the world has ever seen and democracies will hopefully, assuming they survive, be stronger for it.

So how was this election foretold?
Well, please allow me a word about the backstory that is “Globalisation”.

Globalisation has been on a rage since the 1960’s when the first truly transnational corporations spread across the globe seeking integrated, optimised supply chains and access to new prosperous marketplaces, cheaper capital, and of course low cost workers.

They played not only regulatory arbitrage but they also played accounting arbitrage, optimised their balance sheets (liability and asset) using transnational tax efficient strategies designed to pay as little tax on their burgeoning profits, providing increased earnings and capital growth to their shareholders and executive teams.

Globalisation, though, was never really understood by the masses. No one explained what would happen to local jobs, services, lifestyles, communities - in short they never bought in.

It was thrust upon societies and at first very much welcomed. Everybody was a winner. Western economies enjoyed new cheaper goods, access to new markets, new higher paid jobs, requirements for new skills and so on. In fact, recent research by MIT shows that the productivity of companies grew at the same pace as the prosperity of workers from the 1960’s right through to 2000.

This is when the relationship stopped. Companies continued to see gains, but workers did not. In fact, their wages stagnated, their debts grew and they had to work harder for the same or less reward. Systemic risk started to build.

The exact same forces are now also guiding Europe towards a potential break up. European communities are neither engaged nor participating. Most Europeans do not know who their MEPs are, never mind what their views are on any issues that they deem pertinent. Sadly, the EU is seen as a monolithic, impenetrable technocratic gravy train for the politically and financially connected.

This is where we are today - 16 years on and people are now calling a halt to Globalisation. Importantly not because they know what the exact problem is, but because those who say they know, don’t know. In short, they have called the political elites bluff and they wish to get rid of them all.

We should have known better
It is called “Social Tyranny” and it was prescribed as one of the most dangerous forces effecting liberal democracies by John Stuart Mills in his highly celebrated book “On Liberty”.

Mills was an ardent supporter of liberal democracies, women’s rights and the rights of the individual to hold his/her own opinion freely. In fact, he believed that the individual had the right to be wrong, even if his views were deemed dangerous by the state.

He felt that governments had to not only protect the right to freedom of expression, thought, etc., but also to actively encourage the right of minorities to speak and be heard. Most importantly he believed that the greatest dangers facing a society were not despotic regimes, but the tyranny of the majority.

That is to say that when a society is captured by a majority and its narrow beliefs they tend to ignore the concerns and beliefs of the minority, the underclass, the marginalised. In doing so they force these beliefs underground, where they fester and remain unanswered.

Tyranny of the majority
Majority ruled societies can practice a form of oppression more formidable than many kinds of political oppression.

Why? Because it leaves fewer means of escape, penetrating far more deeply into the very detail of life and thus enslaving the soul itself. When society itself is the tyrant, its means of tyrannising are not restricted to the acts of political operators. Society practices a social tyranny more formidable than many kinds of political oppression.

Social pressures are not always explicit, they can be soft, enduring, breaking the self-down – then people just withdraw. Mill says they are a “social evil” as they effectively reduce our liberty, our freedom to think freely. If a society is to provide a meaningful life for its citizens it must actively discourage such forces and not leave the citizen alone to fend off the tyranny of the mass media and the masses.

But why should a modern society support beliefs of the so-called ignorant, dangerous and recently named “populist”?

In his “Dilemma argument”, Mills was emphatic. Societies may view some beliefs as being wrong, in that case, he counter argues that given time they may be found not to be wrong and when they are wrong, then, via debate, society can refute.

For beliefs that are dangerous then they should be aired and equally refuted and in doing so they will lose their support and die away. Why deny the right of society to argue against beliefs that are dangerous or wrong, if you do so by bullying or beating such beliefs into ideologic submission, you simply force the beliefs underground where they go unanswered and where they fester.

Mills argues for plurality of opinion, that when we debate we learn and we grow as individuals and as societies. When people have varying interests and tastes and beliefs the happiness of society not only increases but it also grows stronger. Diversity is the key to our robustness.

Those rare individuals who go against the grain (some even buy gold!) are the ones who also drag us out of our comfort zones and, through their diversification of beliefs, make societies more financially robust.

“He who lets the world choose his plan of life, lives a life of apelike imitation, he who choose a life plan for himself, uses all his faculties”

The election of Trump can be seen as a statement of the minorities who have been ignored and over looked. They live in the “flyover” states. On November 8th 2016 they stood up, on mass, and demanded to be heard. Their values are not solely based on GDP, competitiveness, free movement of goods, open borders, stock market returns and 'Dow 20,000'. 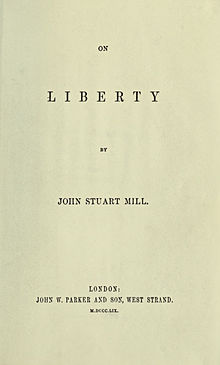 So what next
The world has changed and democracy has been tested. Our media, who became captured in an echo chamber of neo-liberal rhetoric, are undergoing a painful period of self examination.

I hope, as a society, we will learn from this period and perhaps realign our values to promote the individual and not the corporate, the local community and not the global and most importantly we learn to listen and debate and respect each other, regardless of social status, wealth or belief.

Nine Dead After Truck Rams Into a Christmas Market in Berlin (Bloomberg.com) Free cash in Finland. Must be jobless. – CNBC (CNBC.com)

A pensions time bomb spells disaster for the US economy - (BusinessInsider.com)