Bitcoin: The Best Performing Currency For A Second Year In A Row

Bitcoin is no stranger to extreme fluctuations. As Visual Capitalist's Jeff Desjardins notes, for each of the last four years, the cryptocurrency has either been the best or the worst performing currency – with nothing to be found in between.

Luckily, for those that follow the digital currency closely, those fluctuations were mostly pointed in an upwards direction for 2016. The currency finished the year at $968.23, which is more than double its value from the beginning of the year. 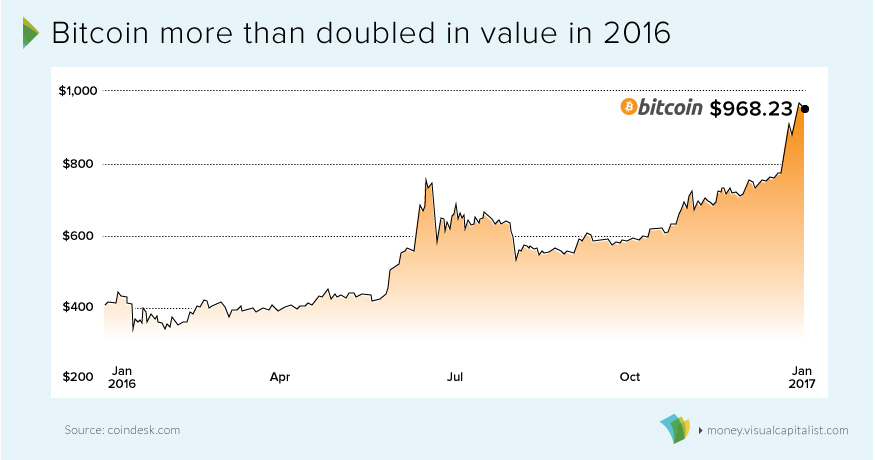 Were any other global currencies able to compete with bitcoin’s strong performance throughout the year?

The following chart compares major currencies (paired with the USD) over 2016: 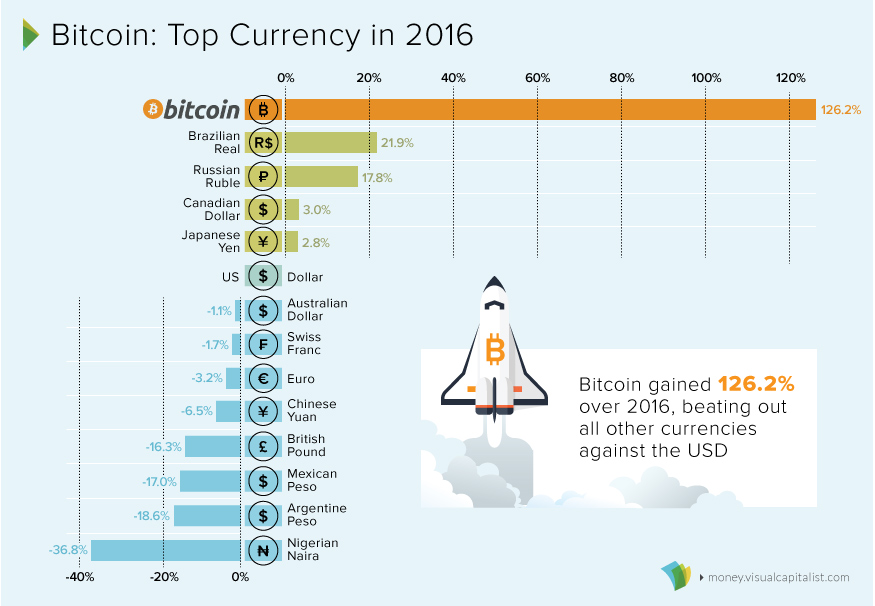 Brazil’s real rallied 21.9% on the year, the most in seven years. Traders are hoping that center-right President Michel Temer can ease public spending following the departure of Dilma Rousseff.

Russia’s ruble also finished the year with double-digit gains, up 17.8% against the U.S. dollar. This was largely due to the recovery in Brent oil prices, which gained $10/bbl over the course of 2016.

However, a rosier picture for oil was not enough to buoy all producers. Africa’s biggest economy, Nigeria, fell into its first recession in 25 years during the opening half of 2016. Ripple effects from low oil prices caused the Nigerian naira to lose more than one-third of its value throughout the year, making it the worst performing currency (at least officially).

Unofficially, Venezuela’s struggling economy has been pushed to the brink by its ongoing currency crisis. The massive hyperinflation is not reflected in official numbers, since the bolívar is technically “pegged” arbitrarily by the government. Based on black market activity, however, experts estimate that the currency ended the year with inflation of roughly 500%.

And in the opening days of 2017, the cryptocurrency has already gained a head start on other global currencies. It passed the vital $1,000 mark in the first days of New Year trading, and could be poised to three-peat for the title of best-performing currency of the year.

Will it be another extreme for 2017 – or will the bitcoin price finally settle for middle ground among other global currencies?

The Money Project is an ongoing collaboration between Visual Capitalist and Texas Precious Metals that seeks to use intuitive visualizations to explore the origins, nature, and use of money.