The Myth Of Authority... "But There'd Be No Roads!"

Along with the Myth of Authority – the idea that being ordered about by other people is legitimate so long as those people have given themselves titles or wear uniforms – there is this idea that, absent government, we’d never have things like roads.

It snowed hard over the weekend and I got to thinking about it as I watched the government plow trucks do their thing.

They do it very expensively.

It seems “free,” of course. The trucks rumble by and you aren’t sent a bill . . . for that. But you’re sent a bill – via the IRS, via your state-level IRS – for many other things, most of which (unlike roads and plow trucks to clear them when it snows) you probably don’t use, don’t want and – quite reasonably – would therefore rather not have to pay for.

Like, for instance, the estimated 10,000-plus nuclear warheads possessed by the federal government. Even if you’re not a Libertarian, it probably strikes you that a few hundred of them are sufficient for “defense.”

But we’re all forced to pay for as many nukes – and carrier battle groups – as the federal government decides it wants, even though we have little if any use for such.

If the U.S. “defense” budget were to be cut in half, we’d still be spending as much as the dreaded Chinese and 4-plus times as much as the Russian bogeyman. Surely, sufficient for “defense.” Just imagine how much more money would be available for roads and plows to clear them. Things most of us probably would be willing to pay for and would pay for voluntarily.

Because we could afford to do so.

If, that is, we weren’t forced to pay for so many other things – like “defense” spending that amounts to more than what Russia and China and the entire axis of evil spend together.

Oddly, many Americans (especially Republican ones) believe “our military” is mendicant, like the ragtag Colonial Army at Valley Forge. That “we” must rebuild it. Because Putin, et al. Who – with his single operational Typhoon is going to challenge Uncle to nooklear combat, toe-to-toe, per Major Kong all those years ago. 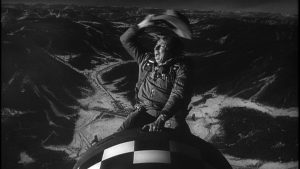 They pay for “rebuilding” (endlessly, excessively) the military – and lately, on top of this, the Homeland Security apparat. So there is less available to pay for things like roads and trucks to plow them.

How many miles of new road could be paid for with $300 billion dollars – just half the current loony sum burned up on the “defense” budget? America would likely not be invaded or nuked in the meanwhile. The 10,000 nukes in stockpile will keep and if even nine out of ten of them are duds, probably 1,000 Hiroshima-plusses ought to suffice to keep Putin from rearing his head. But most Americans – trained to an extent that Dr. Goebbels, were he still around, would find startling – react exactly as required, siding with the government as it sticks its hands in their pockets yet again. Note that both candidates in the late election worked hard to outdo the other as the greatest champion of “defense.”

Even “small government” conservatives defend the defense budget – not grokking that “defense” is also government.

Like the rest of the federal budget. It takes so much from us that we have very little left to spend on ourselves. On the things we need and want.

Most middle class people pay about 28 percent off the top in federal taxes; add more if you are self-employed and have to pay “your share” of the federal tax (it is actually called a contribution) toward FICA, also known as the Social Security tax. These taxes have the effect of making it very difficult to set aside money for retirement – because all your  working life, you are taxed to pay for the retirement of other people, many of whom do not “contribute” much and sometimes nothing at all. Regardless, the point is you could have provided for your own retirement – and probably, retired at a much younger age – if you hadn’t been fleeced at every paycheck to provide money for other people’s retirement.

All of us would be better off; and better able to help people who needed help. Non-coercively, too. Imagine that. 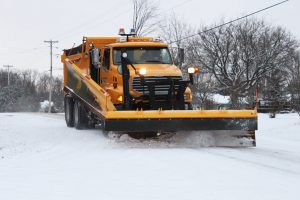 The faulty premise behind the anti-Libertarian argument that “we’d have no roads” and other needful things rests on the assumption – almost never questioned – that we would not have the money available to spend on such things, currently taken away from us to spend on other things.

Including “administration” (make-work government “workers”) and so on.

Imagine if you were allowed (vile, isn’t it, that such language is necessary?) to keep what you earned. Not 60 percent of it. All of it. To spend as you see fit, on only the things you need and want.

Probably, there would be roads. Very good ones.

And plow trucks, too.