At this point, I’ve seen enough. It’s becoming quite clear that Facebook’s Mark Zuckerberg wants to be President of these United States.

The topic first piqued my interest about a week ago when I read an article published at Vanity Fair titled, Will Mark Zuckerberg be Our Next President?

Increasingly, a number of influential people in Silicon Valley seem to think that Mark Zuckerberg will likely run for president of the United States one day. And some people, including myself, believe that he could indeed win. “He wants to be emperor” is a phrase that has become common among people who have known him over the years.

We’ll get to my theory on what that means a little later. First, let’s zip through the myriad indications that he might choose to throw his hoodie into the ring. Last year’s Facebook proxy statement articulated that Zuckerberg can run for office and still maintain control of his company. (To this end, Trump’s controversial precedent may facilitate any thorny political complications regarding the matter.) Then, over the holidays, Zuckerberg responded to a question about being an atheist, a belief he once professed, with a decidedly more politically circumspect answer: “I was raised Jewish and then I went through a period where I questioned things, but now I believe religion is very important.” (No one likes a president who doesn’t believe in some sort of God.) More recently, President Obama’s former campaign manager, David Plouffe, joined the philanthropic Chan Zuckerberg Initiative, to lead policy and advocacy. Other politicians from both parties have also joined the organization. And then there was the most obvious intimation: earlier this year, Zuckerberg, who has a habit of posting his annual New Year’s resolution on his Facebook page, declared that after conquering the previous challenges of learning Mandarin, and building an artificial-intelligence butler for his home, this year he was going to meet “people in every state in the US.” He noted that he’s “spent significant time in many states already, so I’ll need to travel to about 30 states this year to complete this challenge.” I wonder how many of those states are swing states?\

If he does want the job, Zuckerberg definitely has the personality for it. When Facebook went public in 2012, I co-authored a profile of the young C.E.O. During the reporting, I heard from several friends about his penchant for playing world-conquering board and video games. Early childhood pals told me that one of Zuckerberg’s favorite video games as a boy was Civilization, the game in which you have to “build an empire to stand the test of time.” Others have told me that, to this day, Zuckerberg loves to play Risk, a strategy board game where you have to essentially take over the world. Believe it or not, he ended up applying some of these theories while forging and managing the extraordinary growth of Facebook, organizing his product teams in similar ways to his battalions in the board games. (According to someone close to him, these days Zuckerberg loves Game of Thrones and enjoys cooking a meat-laden “Dothraki Feast” while watching Westeros fall in and out of anarchy.)

Then, this morning, I came across the following tweets.

Zuck: "We may come from different backgrounds, but we all want to find purpose and authenticity in something bigger than ourselves." Hmmm

If that’s not enough for you, how about the team of 12 people now working on his personal page to make sure it’s perfectly pristine. Bloomberg reports:

When Facebook went public five years ago, the world had a pretty vivid picture of who Mark Zuckerberg was. As much as anything, that image was of Jesse Eisenberg’s fictionalized performance as Zuckerberg in The Social Network: an intense, socially inept kid billionaire who always wore a hoodie, whether he was meeting with financiers or trying to screw a co-founder in court. Over the past couple of years, Zuckerberg has made a concerted effort to steer his image in a different direction.

Near the end of 2014, he began holding Q&A sessions with groups of people wherever he was traveling around the world, fielding softballs ranging from lessons on startup-building to his favorite pizza toppings. Those town halls have evolved into near-daily posts on Zuckerberg’s own Facebook page, mixing news of company milestones with personal epiphanies, soft-focus photos from his life as a new dad, and responses to user comments. “What he’s learned over the last two years is that his image in the digital domain needs to be controlled,” says David Charron, who teaches entrepreneurship at the University of California at Berkeley. “And he’s simply growing up.”

Zuckerberg has help, lots of it. Typically, a handful of Facebook employees manage communications just for him, helping write his posts and speeches, while an additional dozen or so delete harassing comments and spam on his page, say two people familiar with the matter. Facebook also has professional photographers snap Zuckerberg, say, taking a run in Beijing or reading to his daughter. Among them is Charles Ommanney, known most recently for his work covering the refugee crisis for the Washington Post. Company spokeswoman Vanessa Chan says Facebook is an easy way for executives to connect with various audiences.

While plenty of chief executive officers have image managers, the scale of this team is something different.

Naturally, Zuck doesn’t spend all of his free time smooching on Texas babies. So what’s he doing in between the professional photo shoots, Dothraki feasts, and playing cuddly tech oligarch for “ordinary” Americans? Well he’s suing native Hawaiians to get off his 700-acre, $100 million estate on the Hawaiian island of Kauai, of course.

As reported by the Daily Mail:

Mark Zuckerberg is suing Hawaiian families in an attempt to get them to sell their land to make his 700-acre property more secluded, a Honolulu newspaper reported Wednesday.

Almost a dozen of small parcels on the Facebook co-founder’s $100 million Kauai property belong to Hawaiian citizens who acquired them through legislation dating back to 1850, called the Kuleana Act, according to the Star Advertiser.

As such, these land owners are allowed to walk through Zuckerberg’s domain. But the billionaire is believed to have filed lawsuits against a few hundred people in the hope that they will sell their parcels at a public auction.

Using the law to induce land sales, which isn’t uncommon in Hawaii, can be viewed as problematic because it severs the native Hawaiian community’s link to ancestral land.

Zuckerberg is believed to have sued a few hundred people via several companies that he controls, the Star Advertiser reported. Some of these people, who inherited or owned interest in the land, are dead.

Similar auctions have in the past led to below-market sales, but according to the Star Advertiser, some of those involved in the Zuckerberg cases believe the billionaire will offer a fair amount of money.

I know that’s a lot to take in, so let me end this post with a little humor. 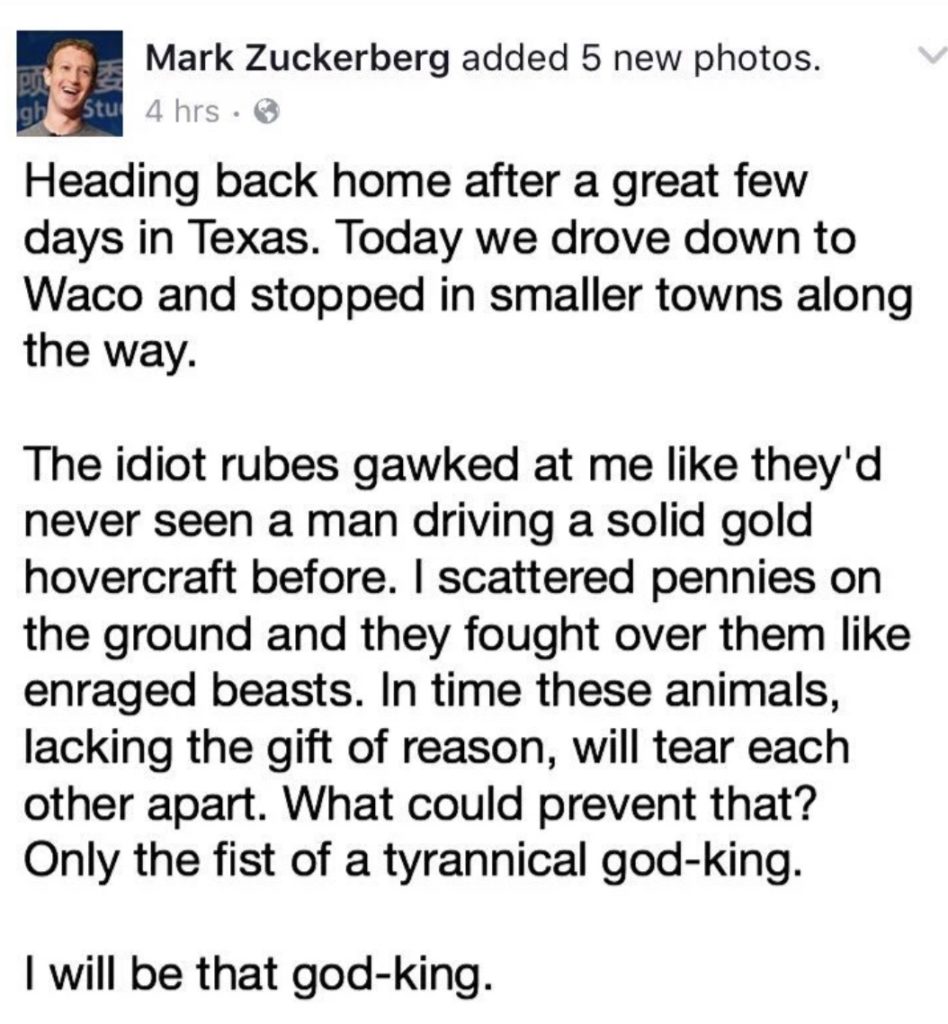 No, that’s not real.