An "Investment" Even More Ludicrous Than Government Bonds

I get asked this sometimes so figured I'd cover it here.

I wrote the below piece some years ago and it answers the question about whether diamonds should be treated as a store of value in an investor's portfolio.

The word monopoly has its roots in the Greek words monos (single) and polein (to sell). It first appeared in Aristotle's Politics where Aristotle describes how in Greece in the 6th century BC the philosopher Thales of Miletus cornered the local olive press market:

"Thales, so the story goes, because of his poverty was taunted with the uselessness of philosophy; but from his knowledge of astronomy he had observed while it was still winter that there was going to be a large crop of olives, so he raised a small sum of money and paid round deposits for the whole of the olive-presses in Miletus and Chios, which he hired at a low rent as nobody was running him up; and when the season arrived, there was a sudden demand for a number of presses at the same time, and by letting them out on what terms he liked he realized a large sum of money, so proving that it is easy for philosophers to be rich if they choose."

Historically one of the most interesting and controversial monopolies is arguably that of the diamond market in recent times.

Throughout history the supply of diamonds has been very scarce. So much so that it was very difficult even for the creme de la creme of society to get hold of these little stones.

Things, however, started to change in the late 19th century when diamonds were found in South Africa and a lot of supply suddenly flooded the market. The price of what had been valuable only due to its scarcity was bound to tumble. To prevent this taking place, in 1888, a cartel with all the movers and shakers of the diamond mining world was formed under the name De Beers. And oh, what a cartel it has proved to be.

Once the supply of the diamonds was under their control, they had to take care of the other side of the equation - the demand.

To do this they joined forces with an advertising agency N. W. Ayer & Son to impact "social attitudes of the public at large" and thereby channel American spending toward larger and more expensive diamonds instead of "competitive luxuries", as they put it. 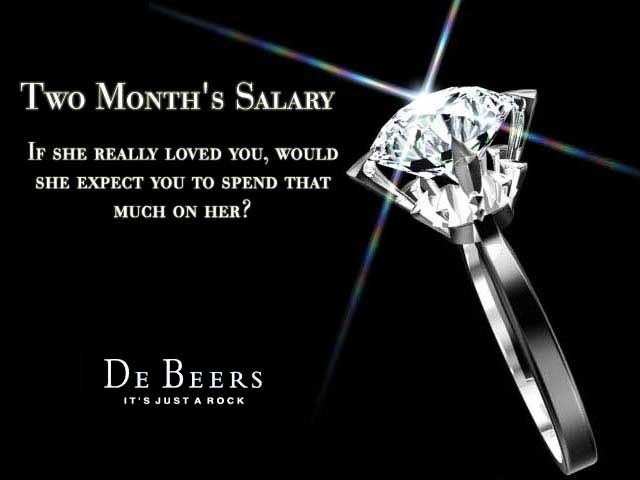 To prevent any price fluctuations caused by selling the diamonds they had to convince the masses to hold onto them and not to "trade". This is where the motto "diamonds are forever" was born. With a sophisticated advertising and PR campaign they turned diamonds into epitomes of eternal romance and love. In the next few decades, sales of diamonds in the US increased a hundredfold. Not bad, right?

However, it didn't end there.

They then proceeded to expand to other global markets. In Japan they literally turned a 1,500 year old Japanese marriage tradition upside down as the number of men giving diamond engagement rings to their women rapidly increased in a mere 14 years. Let me tell you, changing Japanese cultural norms is no small task, and yet today Japanese men purchase diamonds for their brides as readily as Americans or Europeans.

Whenever a new diamond deposit was discovered in the world De Beers rushed in and bought it to minimize fluctuations in diamond prices. They had been relatively successful at that until the very end of the 20th century. At the turn of the century some of the diamond producer countries decided to bypass De Beers' distribution channels and alternatives began to hit the market.

Determining the validity of a diamond takes an expert, and these days even the experts struggle to tell an artificial diamond from a natural one. The average man on the street hasn't a hope in Hell of knowing the difference.

There are two alternatives to diamonds I'm aware of: moissanite and cubic zirconia, and neither of them have defects, which incidentally is one means of identifying fake from real diamonds. Synthetic diamonds have also been created in labs for decades now and these diamonds are indistinguishable from real diamonds because they are, in fact, diamonds. They are also produced at an absolute fraction of the price of real diamonds.

For anyone who does a little research they'll find that diamonds are clearly as rare as macaroni cheese and if they're not rare, they're not valuable. Certain diamonds, such as graded diamonds, are somewhat rare, but diamonds themselves are certainly not rare. Even if we pretended for a minute that yes, diamonds are rare, we're faced with the problem that artificial diamonds can be created by the boatload for next to nothing.

Diamonds aren't liquid, either. Try selling a diamond back to Joey the jeweler and you'll find that typically Joey will pay between 75% and 80% of the purchase price if the diamond wasn't bought from his store and isn't verifiable. In fact, many jewelers won't buy a diamond back unless you've previously purchased that same diamond from them and have the documentation to prove it. Even then, they'll typically only do a trade in, whereby you buy another higher priced diamond and trade your old diamond in.

In my book, diamonds are a terrible investment. Not rare, not liquid, and not valuable.

That's my opinion, which is clearly not shared by the world at large. It's the perception of rarity that matters. Not unlike the perception of safety afforded JGBs, US Treasury bonds, and EU bonds, people value these assets because they are perceived to be valuable. They're not, but that's beside the point... until, well... until it isn't.

How come people buy Rolex watches when many of the fake versions today are indistinguishable from the real ones and, according to a number of jewellers, function just as well? Why do people buy Coca Cola, paying more than any number of the cola versions out there which cost less and have the same amount of disgusting ingredients? How is it that diamonds, which are not rare, and which can be produced for a fraction of the cost, sell for such ridiculous prices?

The answer seems to be that the con job pulled off by arguably THE most successful marketing campaign in corporate history lives on. 15 years ago, De Beers controlled about 80% of the market but that figure has now fallen below 40%. I'm simply surprised that their hold on the market has lasted as long as it has. An exceptional feat. Well done, chaps.

A good friend of mine who is a successful real estate agent likes to say that the key to a sale is ensuring that the woman is pulled over the line. A man will rarely buy a home his wife doesn't like. I think the same is probably true of diamonds. Try telling your fiance that you bought her a synthetic diamond engagement ring and, "Oh, honey, aren't you glad I saved a couple of grand?" See how well that goes down.

PS: Don't forget to share this article if you liked it, and if you hated it, don't forget to send it to everyone you know telling them how bad it is. Have a great weekend!