Which Graduate Degree Gets You Out Of Debt The Fastest?

If you’re one of the 29% who feels their choice of major in college didn’t prepare them to secure the job they wanted after graduation, you may be considering graduate school as a shot at a do-over. Those seeking higher income may indeed find themselves better equipped after earning a graduate degree. But this second chance can come at a steep cost.

But is it worth it? And moreover, does it matter financially if you attend a prestigious graduate school or not?

One way of answering this question is to look at how much income you make after grad school compared to the amount of debt you've now accumulated. We decided to analyze data from Priceonomics customer Earnest, a financial services company, to see which advanced degrees produced graduates with the the most (and least) student debt and how that compared to their actual earnings after school.

We found that medical professionals take on the most debt - even when their high salaries are accounted for - while MBAs enjoy a low debt burden relative to their income.

We also looked at the question of does the prestige of the school matter.

We found graduate program prestige comes with tangible financial benefits: for all disciplines except medicine, graduates of top-100 programs enjoy lower debt relative to their income upon graduation. This trend continues after graduation, with the exception of engineering graduate students, where students from less prestigious schools have more favorable debt to income ratios six years after graduation than their counterparts from higher ranked schools.

We first asked how much debt the typical graduate degree holder carries. This data is supplied by respondents looking to refinance their debt, so while it is self-reported, users must be reasonably accurate if they wish to receive realistic rate estimates. Average student loan debt - which comprises debt accumulated in college and graduate school - is reported for each degree type below. 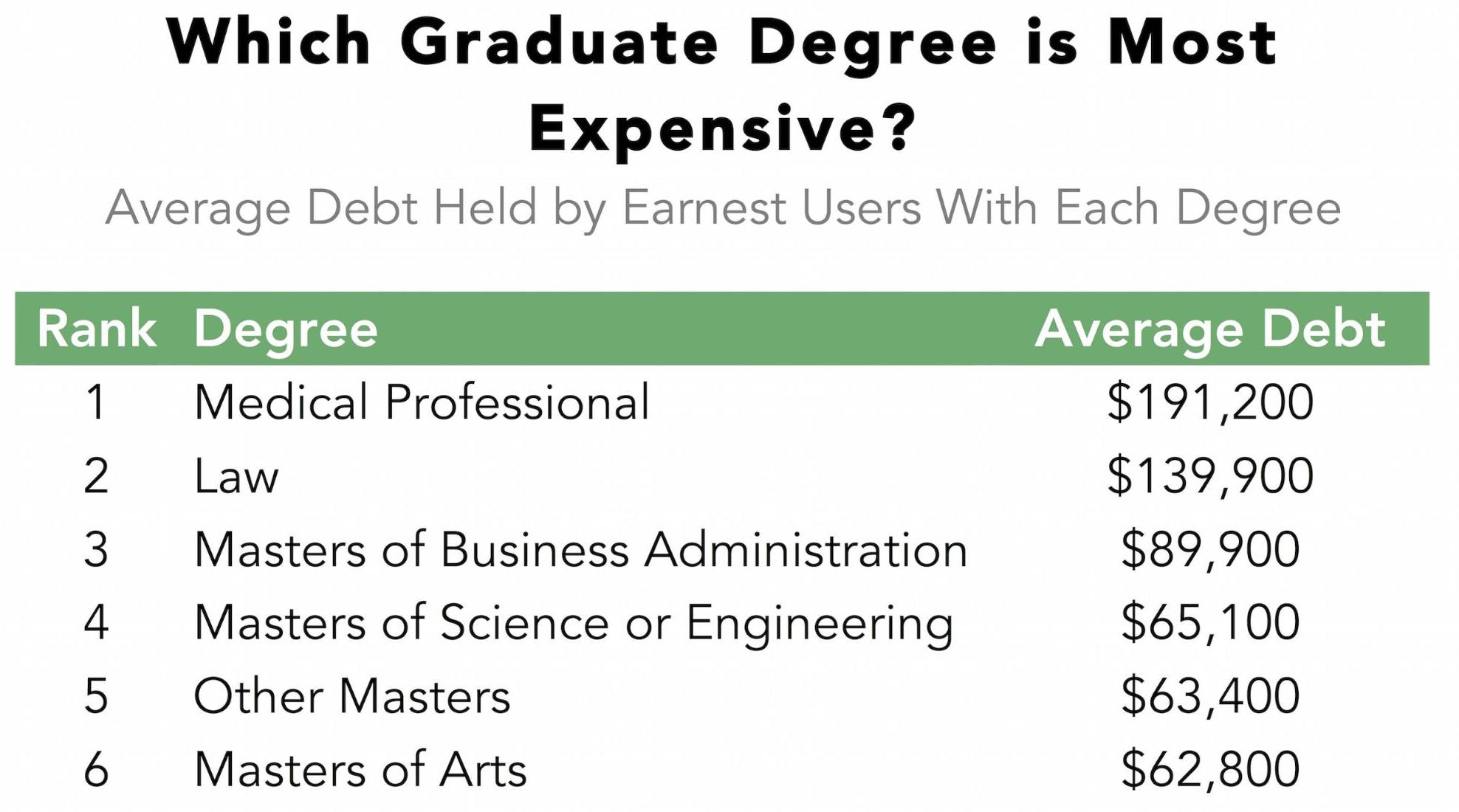 Even with a hefty price, a degree program may be worth it if it confers earning power to match. If we account for income, do doctors still have the highest debt compared to other graduate degree-holders?

To answer this question, we divided average debt by our respondents’ average self-reported income to calculate a debt-to-income ratio for each group of graduates. Debt-to-income ratios below 1 mean these degree-holders make more than they paid for their degree in one year. Values over 1 mean the degree cost more than what the typical graduate makes in a year. 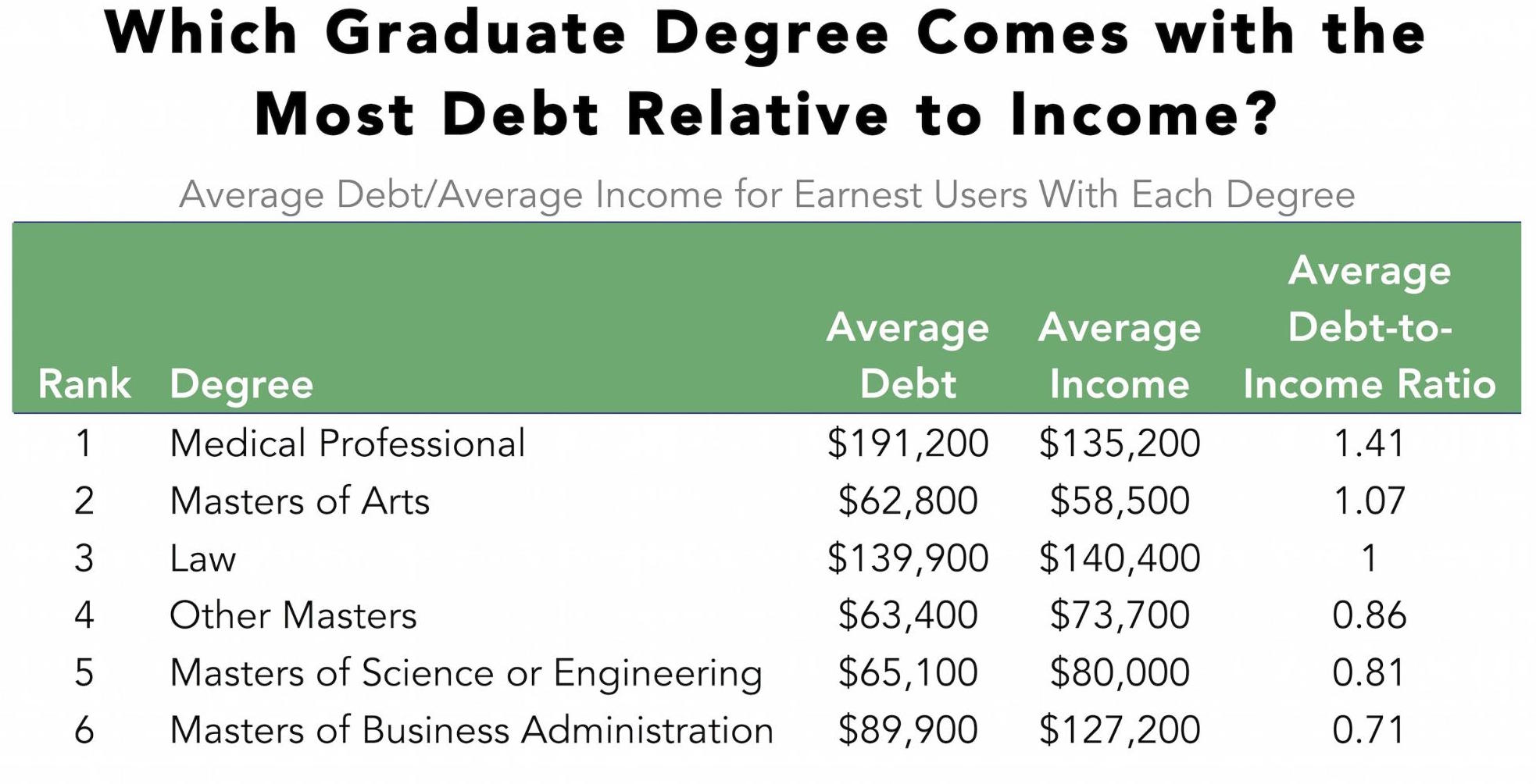 Even if we take income into account, medical professionals bear the greatest burden when it comes to paying for their degrees. These graduates make a solid income, but it’s not enough to balance out their formidable debt.

Graduates with Masters of Arts degrees take second place in our debt-to-income ranking despite paying the least for their credentials. These graduates can expect relatively low starting salaries that handicap their ability to pay down debt.

At the other end of the spectrum, MBAs enjoy the lowest debt-to-income ratio. These degrees are relatively affordable and confer high earning power.

The relationship between income and debt changes over time as graduates climb the career ladder and pay down their loans. We wanted to see how debt-to-income ratio changes as graduates establish themselves in their careers, so we broke our sample down by years post-graduation to chart a debt-to-income trajectory for each degree type. 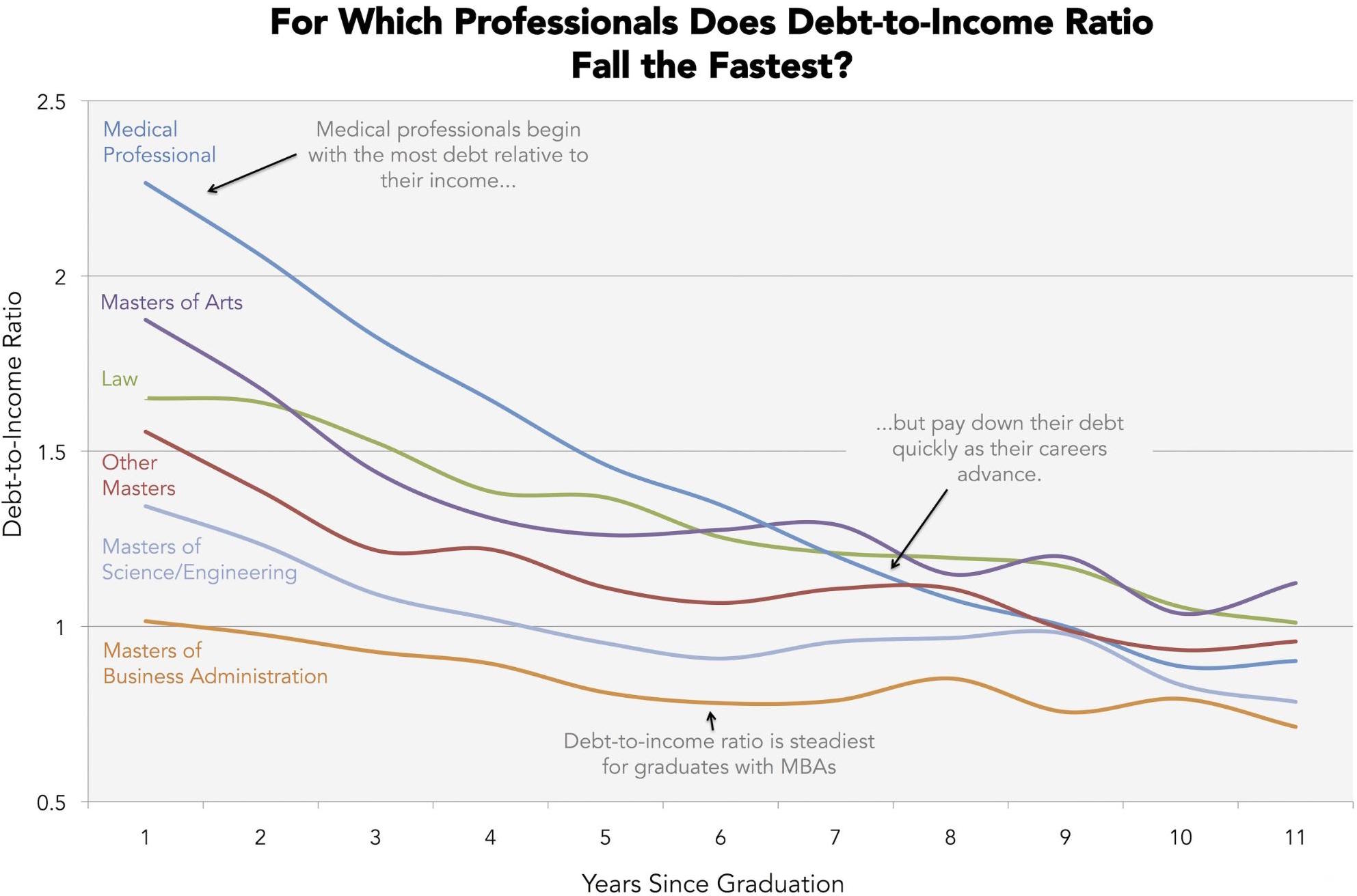 Graduates with all degree types experience a decrease in debt-to-income ratio after graduation, but in some professions, those ratios come down faster than in others.

Medical professionals have the highest debt-to-income ratio immediately after graduation. This is likely because MDs begin their careers in residencies, which are essentially low-paid apprenticeships lasting 3 to 6 years. Once residents become practicing physicians, they can expect comfortable six-figure salaries and subsequently make fast progress on their debt.

In contrast, MBAs have the flattest trajectories toward debt freedom. Though they have the lowest debt-to-income ratio across the entire post-graduation time period we considered, they  make the least progress between years 1 and 11 after graduation.

The chart below zooms in on the last data point in our chart, ranking debt-to-income ratio for midcareer professionals 11 years removed from graduation. 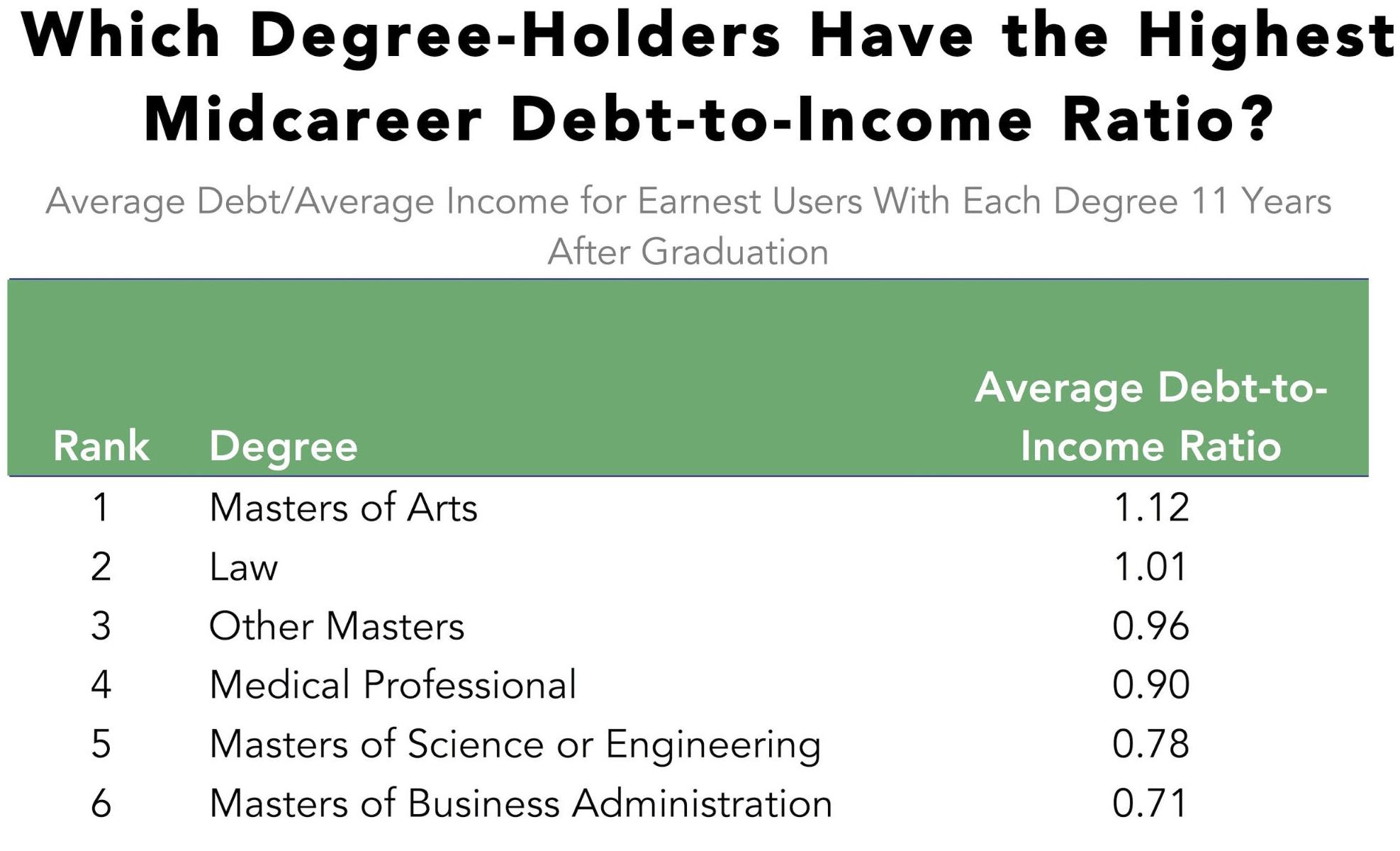 Even in the middle of their careers, graduates with Masters of Arts degrees earn relatively little compared to their debt. Costly law and medical degrees hold debt-to-income ratios near 1 for lawyers and doctors, as well.

Professionals with degrees in business, science, or engineering fare comparatively better, making comfortably more than the cost of their degree in one midcareer year.

Of course, all degrees aren’t created equal. Stanford’s Graduate School of Business, for example, grants its MBA recipients access to a higher-powered network than does the average public college. This advantage could translate to a real difference in earnings and, in turn, debt-to-income trajectory.

To see the difference grad school reputation can make, we broke our sample down based on whether a graduate’s degree program landed in the top 100 for their field, then charted debt-to-income trajectory over 11 years post-graduation. 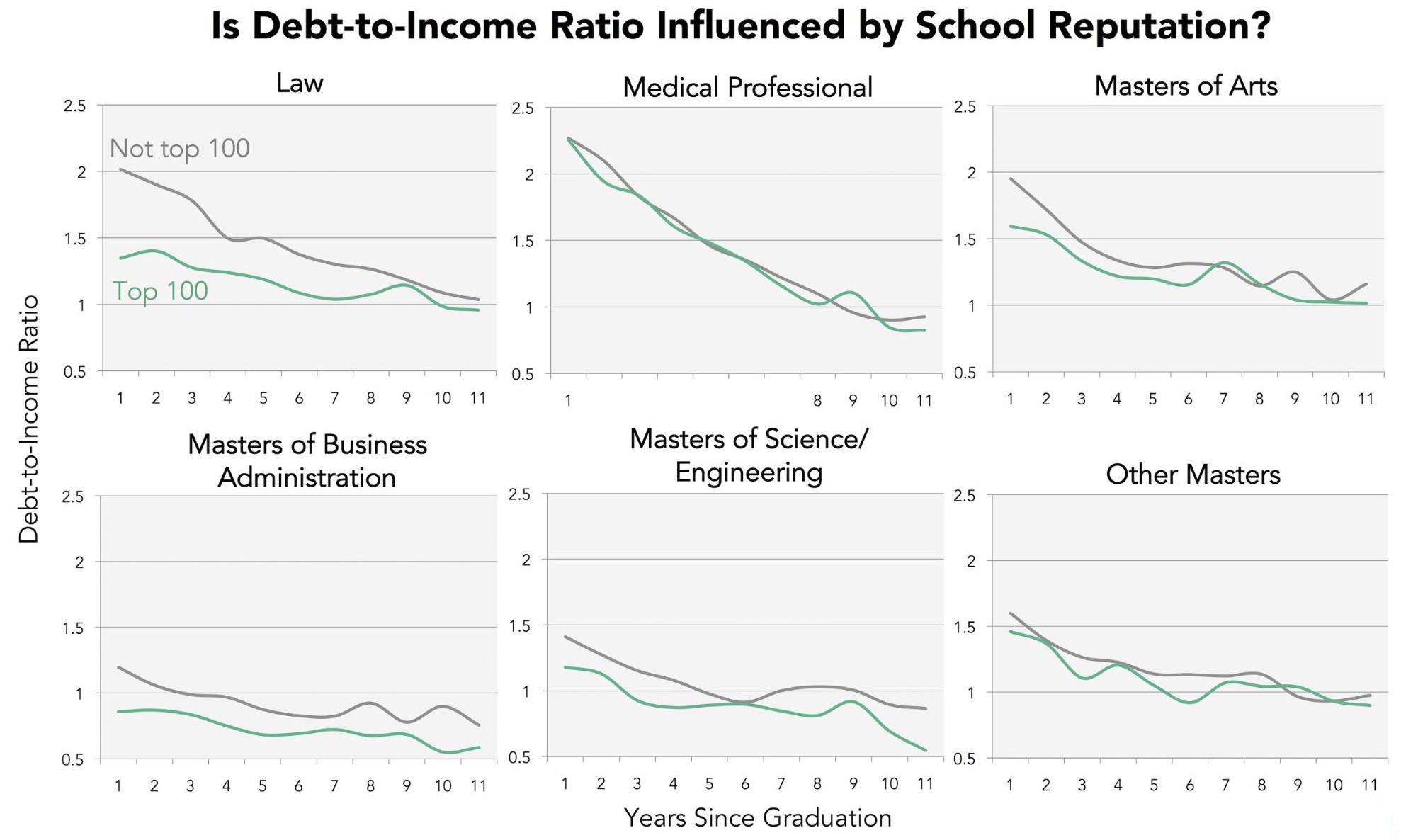 School reputation matters. Across a variety of disciplines, professionals who graduate from higher-ranked schools begin their careers with less debt relative to their income. And for the most part, this trend is still apparent a decade after graduation.

There’s one exception: medical professionals have more or less the same debt-to-income trajectory regardless of their school’s reputation. With respect to student debt, all medical degrees are created equal.

So if you’re seeking an affordable graduate degree that will boost your earning power, what should you do?

The “rich doctor” stereotype makes medicine look appealing, but it doesn’t do justice to the burden of financing an MD. Medical professionals take on an average debt near $200,000 to finance their degrees, and early in their careers, their income does little to offset their debt. Attending a more prestigious school doesn’t mitigate their high debt-to-income ratio; graduates of top schools pay just as much relative to their salary as grads from lower-ranked programs.

In contrast, the average MBA makes six figures after spending one or two years in graduate school. They typically take on around $90,000 in debt, but consistently enjoy a low debt-to-income ratio. This is doubly true for graduates of top-100 business programs, who enjoy the high income that comes with access to a high-powered alumni network.