Stockman Warns "A Hurricane Is Bearing Down On The Casino"

Authored by David Stockman via The Daily Reckonig blog,

Yesterday I said the Donald was absolutely right in canning the insufferable James Comey, but that he has also has stepped on a terminal political land-mine. And he did.

That’s because the entire Russian meddling and collusion narrative is a ridiculous, evidence-free attempt to re-litigate the last election. And now that the powers that be have all the justification they need. And what is already an irrational witch-hunt will be quickly turned into a scorched-earth assault on a sitting president.

I have no idea how this will play out, but as a youthful witness to history back in 1973-1974 I observed Tricky Dick’s demise in daily slow motion. But the most memorable part of the saga was how incredibly invincible Nixon seemed in early 1973.

Nixon started his second term, in fact, with a massive electoral landslide, strong public opinion polls and a completely functioning government and cabinet.

Even more importantly, he was still basking in the afterglow of his smashing 1972 foreign policy successes in negotiating detente and the anti-ballistic missile (ABM) treaty with Brezhnev and then the historic opening to China on his Beijing trip.

So I’ll take the unders from anyone who gives the Donald even the 19 months that Nixon survived.

After all, Trump lost the popular vote, is loathed by official Washington, barely has a functioning cabinet and is a whirling dervish of disorder, indiscipline and unpredictability.

To be sure, the terms of the Donald’s eventual exit from the Imperial City will ultimately by finalized by the 46th President in waiting, Mike Pence. But I’m pretty sure of one thing: Between now and then, there is not a snow ball’s chance in the hot place that Donald’s severance package will include the ballyhooed Trump Tax Cut and Fiscal Stimulus.

Markets slipped today because of carnage in the retail sector (which I’ve been warning readers about). But these fantasies are apparently still “priced-in” to a market that has now become just plain stupid.

What is surely coming down the pike after the Comey firing, however, is just the opposite.

That is, Washington will soon become a three-ring circus of investigations of Russia-gate and the “hidden” reasons for Trump’s action. The Imperial City will get embroiled in bitter partisan warfare and the splintering of the GOP between its populist and establishment wings.

In that context, what passes for “governance” will be reduced to a moveable Fiscal Bloodbath that cycles between debt ceiling showdowns and short-term continuing resolution extensions.

Progress on Obamacare “repeal and replace” or on a 2018 budget resolution that would enable consideration of tax reform will be nearly impossible.

Apparently, that’s not yet dawned on the Wall Street shills who are in the business of justifying a market that never stops rising. I heard a knucklehead from one of the dodgiest of these shops, Bespoke Investments, on Bloomberg yesterday re-spinning the entire history of the last six months.

The soaring post-election stock market supposedly had nothing to do with Trump or his stimulus and “growth agenda.”

Nope, it’s just about the “fundamentals,” according to the fantasy spinners at Bespoke Investments. Mr. Market doesn’t even care about Washington and will get by just fine even with a tax cut delay or even no tax cut at all. Wall Street is just pricing in a rebounding global economy and a return to double digit profits growth.

The “recovery” is nearly 100 months old and exceedingly long-in-the-tooth by historic standards. Meanwhile, the Fed has clearly embarked on a tightening cycle for the worst of all reasons. That is, it knows it has not abolished the business cycle and is desperately raising rates so that it has dry powder to combat the next recession!

Beyond that, China is on the brink of a massive credit implosion and has already cranked back on debt growth, which hit an insane $4 trillion annualized rate (33% of GDP) in the first quarter. Accordingly, global trade and commodity prices are heading for a deflationary relapse — as sinking oil, iron ore and copper prices are already attesting.

In short, so much for the newly discovered “fundamentals.”

What this really means is that the robo-machines and day traders are playing chicken with the Imperial City. There is no basis whatsoever for the massive post-election re-rating of the stock market except for the fabled Trump Stimulus.

And that is now deader than a doornail. In fact, the reality is even worse than the certainty that no “hand-off” of the stimulus baton to fiscal policy is going to occur.

But for some reason, market volatility is at a  24-year low. That’s despite the unprecedented convergence of political, fiscal and monetary policy risks — to say nothing of foreign policy hot spots from Ukraine to Syria and the Korean peninsula.

Stated differently, the casino is completely unhinged. And the market moved hardly four S&P points — in the wrong direction — after the Comey firing. 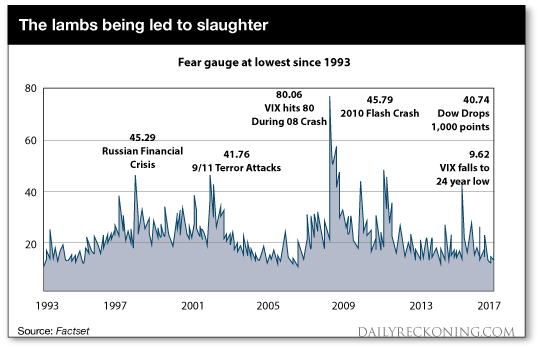 To use a storm metaphor, I have never been in the eye of a hurricane. But I do reside only a few blocks from Wall Street. And I can feel the financial barometric pressure plummeting by the hour.

In fact, others than the five FAANG stocks (Facebook, Amazon, Apple, Netflix and Goggle), the market has been silently collapsing since March 1st.

That’s right. During the last 70 days, the FAANGs have gained $260 billion in value, while the other 495 companies in the S&P 500 have lost an identical amount. And on that utterly unmistakable pattern history is absolutely clear.

Stated differently, the combined market cap of the NASDAQ “Big 5” has soared from $1.9 trillion to nearly $3 trillion since early 2015, or by 55%. That compares to just a 4.5% gain in the aggregate market cap of the the other 495 S&P 500 stocks during that period.

That’s a radical narrowing of the market if there ever was one. It’s also evidence that they eye of a financial hurricane now sits dead atop the canyons of Wall Street.

When the market narrows to a handful of momo names, its all over but the shouting. Like the case of the Nifty Fifty back in the early 1970s, a crash is just around the corner.

In short, these five giant companies essentially account for the last spasm of a monumental financial bubble that has been building for nearly three decades.

Get out while you still can!