Authored by Mike Shedlock via MishTalk.com,

Sherman County Oregon believes the 2,000 acre Azure Farms is not doing enough to control Canada Thistle, a noxious weed. In this case, not doing enough means not spraying weeds with herbicides.

To remedy the alleged problem, the county proposes seizing the farm and spraying everything with Roundup and other herbicides. Azure Farms is certified organic. Of course, organic farms cannot by definition use herbicides, so the farm would be forced out of business by the county government.

Adding insult to injury, the county would place a lien on the property forcing it to pay for the herbicides.

An Organic Farm Under Threat

Azure Farms is a working, Certified Organic farm located in Moro, Central Oregon, in Sherman County. It has been Certified Organic for about 18 years. The farm produces almost all the organic wheat, field peas, barley, Einkorn, and beef for Azure Standard.

Sherman County is changing the interpretation of its statutory code from controlling noxious weeds to eradicating noxious weeds. These weeds include Morning Glory, Canada Thistle, and Whitetop, all of which have been on the farm for many years, but that only toxic chemicals will eradicate.

Organic farming methods – at least as far as we know today – can only control noxious weeds—it is very difficult to eradicate them.

Sherman County may be issuing a Court Order on May 22, 2017, to quarantine Azure Farms and possibly to spray the whole farm with poisonous herbicides, contaminating them with Milestone, Escort and Roundup herbicides.

This will destroy all the efforts Azure Farms has made for years to produce the very cleanest and healthiest food humanly possible. About 2,000 organic acres would be impacted; that is about 2.8 times the size of the City of London, England, and 1.5 times the size of the city center of Philadelphia that could be sprayed with noxious, toxic, polluting herbicides.

The county would then put a lien on the farm to pay for the expense of the labor and chemicals used.

If you are concerned about where your food comes from, enjoy Organic and non-GMO food grown in the United States, and support organic farmers, contact Sherman County Court before May 22, 2017 (and preferably before May 17 when the next court discussion will be held).

Raise your voice and speak up for you and your families and communities.

This proposed action is completely unreasonable and would destroy an organic farm and pollute a massive area. If enough voices that benefit from organic produce speak up, the county will understand that there are people that care about their food NOT containing toxic chemicals. And if the supporters of healthy food can have a louder voice than the supporters of toxic chemicals, every politician will listen. PLEASE take action today and share this message. Overwhelm the Sherman County representatives with your voice.

Alos consider Will There be Mandatory Herbicide Spraying on Organic Farms in Sherman County, Oregon? by Charles Benbrook, PhD.

He sent a letter to Lauren Hernandez (email above).

I live in Wallowa County. I learned today of the recent, dramatic change in the Sherman County noxious weed control program and the plan to forcibly spray a 2,000-acre organic farm in the county.

I served for six years, along with fellow Oregonian Barry Bushue, past-president of the Oregon Farm Bureau, on the USDA’s AC 21 Agricultural Biotechnology Advisory Committee. Issues arising from herbicide use were a frequent topic of discussion during our Committee’s deliberations.

I have published multiple scientific papers in peer-reviewed journals on glyphosate, its human health risks, and the impact of genetically engineered crops on overall herbicide use and the spread of resistant weeds. In a separate email, I will forward you copies of my published research relevant to the use of herbicides, and glyphosate in particular.

The notion that Sherman County can eradicate noxious weeds by blanket herbicide spraying is deeply misguided. I cannot imagine a single, reputable university weed scientist in the State supporting the idea that an herbicide-based noxious weed eradication program would work (i.e., eradicate the target weeds) in Oregon, or any other state.

There is near-universal agreement in the weed science community nationwide, and surely as well in the PNW, that over-reliance on glyphosate (Roundup) over the last two decades has created multiple, new noxious weeds posing serious economic, environmental, and public health threats.

In fact, over 120 million acres of cultivated cropland in the U.S. is now infested with one or more glyphosate-resistant weed (for details, see http://cehn-healthykids.org/herbicide-use/resistant-weeds/).

The majority of glyphosate-resistant weeds are in the Southeast and Midwest, where routine, year-after-year planting of Roundup Ready crops has led to heavy and continuous selection pressure on weed populations, pressure that over three-to-six years typically leads to the evolution of genetically resistant weed phenotypes, that can then take off, spreading across tens of millions of acres in just a few years.

It is virtually certain that an herbicide-based attempt to eradicate noxious weeds in Sherman County would fail. It would also be extremely costly, and would pose hard-to-predict collateral damage on non-target plants from drift, and on human health and the environment. But even worse, it would also, almost certainly, accelerate the emergence and spread of a host of weeds resistant to the herbicides used in the program. …

if Sherman County is serious about weed eradication, it will have to mandate widespread spraying countywide, and not just on organic farms, and not just for one year. The public reaction will be swift, strong, and build in ferocity. It will likely lead to civil actions of the sort that can trigger substantial, unforeseen costs and consequences. I am surely not the only citizen of the State that recalls the tragic events last year in Malheur County.

Plus, I guarantee you that the County, the herbicide applicators, and the manufacturers of the herbicides applied, under force of law on organic or other farms, will face a torrent of litigation seeking compensatory damages for loss of reputation, health risks, and the loss of premium markets and prices.

I have followed litigation of this sort for decades, and have served as an expert witness in several herbicide-related cases. While it is obviously premature to start contemplating the precise legal theories and statutes that will form the crux of future litigation, the County should develop a realistic estimate of the legal costs likely to arise in the wake of this strategy, if acted upon, so that the County Commissioners can alert the public upfront regarding how they will raise the funds needed to deal with the costs of near-inevitable litigation.

If you have any questions, please do not hesitate to call me.

Ther above image from Eddmaps. 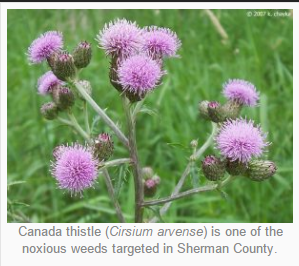 Even if someone thought this action would eradicate the weeds, it would have to be applied to the entire county if not the entire state. Then what? The nation?

I always want to know the other side of the story.

In this case, the story is farmer vs farmer. Neighboring wheat growers say weeds spreading from Azure Farms threaten their crops.

Capital Press reports County May Press for Quarantine of an Organic Farm.

Local wheat farmers say weeds spreading from Azure Farms, on the outskirts of Moro in north central Oregon, cost them money in the form of additional herbicide control. Most critically, growers of certified wheat seed say their crops will be worthless if contaminated by Rush Skeleton Weed, Canada Thistle, Morning Glory and White Top spreading from the farm.

Spraying the weeds with Milestone or other herbicides, however, would cause the farm to lose organic certification for three years. Azure Standard, which operates Azure Farms, is a major distributor of organic products.

Sherman County gave the farm until May 22 to respond with a weed management plan. If not, the county will ask the Oregon Department of Agriculture to quarantine the farm.

The issue has blown up on social media.

The manager of Azure Farms, Nathan Stelzer, urged supporters to “Overwhelm the Sherman County representatives with your voice.” A video posted on the farm website called for people to express their outrage reportedly has resulted in hundreds of phone calls and thousands of emails to county officials.

The issue may come to a head Wednesday when the county’s Board of Commissioners takes up the issue. The county is expecting such a crowd that it moved the session from the courthouse to the Sherman County School gym, 65912 High School Loop, Moro, at 4 p.m.

“The school gym is the only site in Sherman County big enough to hold the expected crowd and we received permission to use the gym only if we delayed our meeting until after the students are dismissed,” Commissioner Tom McCoy said in an email.

Wheat farmer Bryan Cranston, who grows certified seed next to Azure Farms, said its weed problems have gotten progressively worse over the years. Cranston said he spoke to Selzer and told him, “I don’t drift chemicals on you, I’d appreciate it if weeds don’t drift on me.”

But he added, “You’re messing me up.”

The county warned that it would spray if the farm didn’t, and the cost for multiple surveys throughout the growing season would be billed to the farm as a lien on its property taxes.

Asher said the county could help identify weed, recommend control methods and herbicide products, and had a spray crew for hire if necessary.

David Stelzer said Azure is attempting to improve its ground through crop rotation and “companion planting” of various crops.

“Bio-diversity, a few weeds in the field, does not make a bad farmer,” he said.

Responding to comments he said have been made about the farm, he said it is not affiliated with a religion although they are a “family a faith.” He said Azure properly pays its taxes and provides a $6 million payroll. He said the farm’s wheat yields nearly meet the county average and is of high quality. Eventually, organic farming methods will be “dominant,” he said.

That’s both sides of the farming story.

But there is a medical issue as well. Some patients claim Roundup gave us cancer as EPA official helped the company.

Whether or not you buy and eat organic foods, the proposed action (property seizure)  is extremely controversial, and it likely will not do much about the weeds either.

Widespread overuse of herbicides (I admit I use them on my lawn and garden), has created Roundup resistant weeds that are near impossible to get rid of.

Thistle is one weed I have a very difficult time with myself.  Some plants turn brown in a day or two, but thistles stay green for quite a long time even if they wilt and look sick.

I sprayed thistles four times over the course of a week this year hoping to get rid of them.

If you care to voice an opinion, you can do it here: lhernandez@co.sherman.or.us

I recommend being polite.

My opinion: Spraying will not work. More importantly, the proposed county action of property seizure steps well over the bounds of reasonableness.