Authored by Craig Wilson via The Daily Reckoning,

While the interview was held prior to the Federal Reserve’s quarter point hike to interest rates, all of the core items covered are even more relevant now. To dive further, Jim Rickards explains the real reason the Fed raised rates and what he thought was next for the Fed and the market.

The Boom Bust host began by asking what he was looking at for reaction to the Fed. The economist remarked,

“It was already priced into the markets. What the market is really looking for is some guidance from the Fed about balance sheet normalization. Before the last financial crisis the balance sheet was about $800 billion. They’ve taken it to $4.5 trillion which is how much money the Fed has printed in the last eight years. They now want to normalize that and get it back down.”

“The reason they’re doing both... raising rates and the reason they’re normalizing the balance sheet is because they’re getting ready for the next recession. Research shows that you’ve got to lower interest rates about 3% to get out of a recession.”

Then, to show complexity to the monetary measurements Rickards urged, “But what if a recession happens next month or even next year? This expansion is one of the longest in history. A recession will come sooner than later.”

“How is the Fed going to get us out of a recession if interest rates are only 1%. They’ve got two missions. One is get them up to 3 or 3.5% – at the rate they’re going it may take to 2019. They may not make it that far before the recession hits. If you’re only 1 or 1.5% and the recession hits causing you to lower it to lower to zero, the other thing you can do is QE4 and expand the balance sheet. You’ve got to reduce the balance sheet before you can expand it.”

“They’re getting ready for the next recession… but the economy is looking extremely weak right now and we might even be in recession by the summer. The Fed might even cause the recession they’re preparing to cure. That’s what you get for eight years of manipulation."

When asked what about the Fed acknowledging weakness on inflation, Rickards responded, “Here’s the Fed model. They’re on track to raise rates four times a year by 25 basis points each time. Every March, June, September and December between now and the middle of 2019 they will raise rates until they hit the 3 or 3.5% target.”

Rickards then warned the only way such moves would be stopped was,

“One of three factors come into play that would cause it to pause. One is, if you see job creation drop below 75,000 per month…”

“The second one is disinflation. The Fed has a target called personal consumption expenditures (PCE) that excludes energy and food prices. They want that at 2% but it is dropping where it hit 1.6 in March. 1.5% in April and looks like it is going the wrong way. It is not going down fast and far enough to stop [the Fed raising] in September.”

“The third factor is a disorderly decline in the stock market. Not a normal decline, the stock market can go down 10% over four or five months and the Fed could care less. If it goes down 7 or 8% over two weeks, the way it did in August 2015 or January 2016 that could cause them to pause.”

Giving investors a greater understanding for the Fed and rate hikes he highlighted, “If you don’t see one of those pause factors expect them to raise rates.” 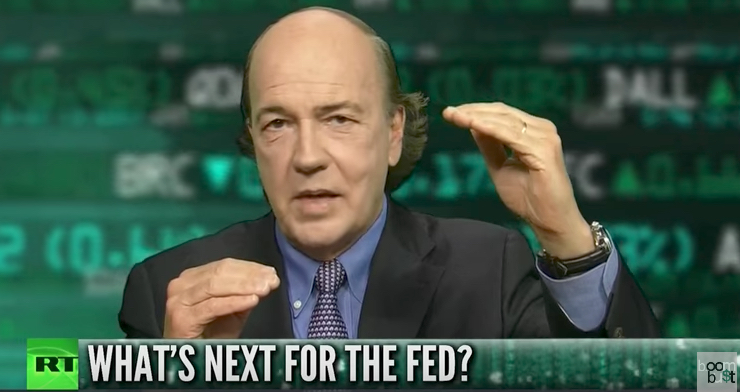 When prompted on President Trump’s thoughts on low interest rates and Federal Reserve Chair Yellen, Rickards’ was asked about Trump’s policy toward the Fed. Rickards narrowed in, “Trump has no consistency. I think he is an interesting figure… The point is, you never know what Trump is going to do next. I would note to watch what he does and not what he says.”

Speaking in terms of the administration and what to expect from the White House on appointments to the Fed, Rickards provided, “They’ve leaked some nominations for some of the vacancies on the Fed. One is Professor Goodfriend who has indicated he’d like a more rule based approach [to monetary policy].”

“[That is] talking about the taylor rule or something like it, that says that interest rates should be 2 or 2.5% now. It indicates [Trump] is looking to put ‘hard money’ people on the Board of the Fed even though he’s noted he likes ‘easy money’ policy.”

“I think that these appointees will continue the path that Yellen is on. The problem with Yellen and the appointees, whoever Trump puts on, is that the Fed is tightening into weakness. They haven’t done that since 1937.”

Giving a historic context to his proof points the currency and central bank expert reminded, “Normally you tighten when the economy is really strong, unemployment goes down. The Fed never leads the market, they always follow the market… Here we are in a situation where the economy is cooling down.”