Earlier we showed the shocking satellite images showing numerous landslides aound the mountain that is North Korea's nuclear test site, and it appears Chinese officials are also keeping a very close eye on the region, instigating "emergency monitoring" for radiation leaks as the former chairman of the China Nuclear Society warns of the potential for a massive environmental disaster.

As SHTFplan.com's Mac Slavo notes, we already know that North Korea has the capability of not only firing Inter-Continental Ballistic Missiles that could strike major U.S. cities, but that they have the nuclear technology to make any such attack absolutely devastating.

Weapons of Mass Destruction, electro-magnetic pulse weapons and World War III aside, however, the South China Morning Post reports that another danger lurks just below the mountain where North Korea has been testing their nuclear devices.

A total of at least six nuclear device tests have reportedly taken place in North Korea and Chinese seismologists have been able to pinpoint their locations to within 100 meters. 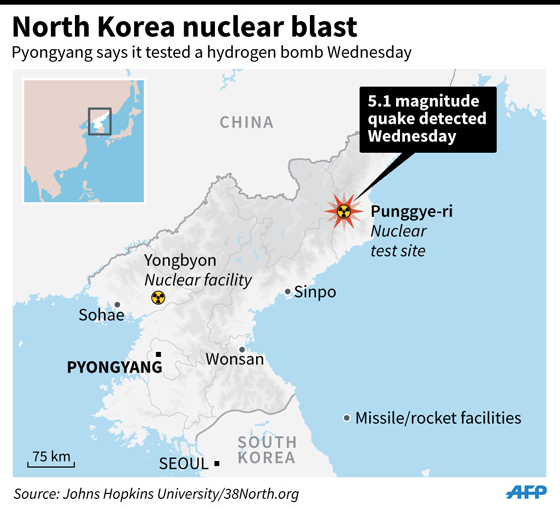 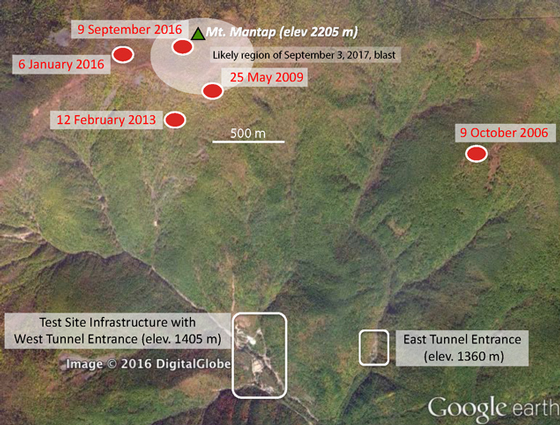 It turns out that all of the tests occurred under the same mountain and scientists are now warning that it could implode, leaving a massive hole that would leak deadly radiation across the entire region, including China:

Wang Naiyan, the former chairman of the China Nuclear Society and senior researcher on China’s nuclear weapons programme, said that if Wen’s findings were reliable, there was a risk of a major environmental disaster.

Another test might cause the whole mountain to cave in on itself, leaving only a hole from which radiation could escape and drift across the region, including China, he said.

“We call it ‘taking the roof off’. If the mountain collapses and the hole is exposed, it will let out many bad things.”

Sunday’s blast was followed by an earthquake eight minutes later, which China’s seismic authorities interpreted as a cave-in triggered by the explosion.

If the results are accurate - which we now know they are judging by the satellite images - then there has already been a partial implosion of the mountain, though the radiation released during recent nuclear tests remains contained. At least we think it is still contained.

Close-up of slope between North Portal and mountain peak showing multiple landslides before:

With North Korea planning even more tests, China has reason to be worried.

“A 100 kiloton bomb is a relatively large bomb. The North Korean government should stop the tests as they pose a huge threat not only to North Korea but to other countries, especially China,” he said.

As we’ve seen with Fukushima, radiation could force long-term evacuations of thousands of square miles and cause deadly consequences for people living downwind of any potential leak.

The theory sounds reasonable. And whether or not its true, it certainly gives China a solid position from which to negotiate North Korea’s nuclear disarmament.

If this report continues to gain traction - and the satellite images we showed earlier appear to confirm it -  then North Korea’s weapons testing is no longer just a geo-political military problem, but rather, has the potential for a massive humanitarian crisis, something that both East and West could use to further pressure the North’s leader Kim Jong Un in an effort to avoid widespread nuclear conflict.