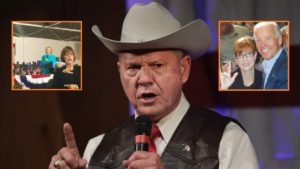 From the outset, several aspects of the Washington Post‘s decades-old accusations of Roy Moore having inappropriate relations with four young women seemed off. In addition to odd circumstances surrounding the story’s origins, the accusers themselves – and even the WaPo journalist who wrote the story – have checkered pasts and political views which some could consider ulterior motives.

If the accusations against Moore are true, he needs to immediately step aside and exit politics – as both President Trump and, oddly, Mitch McConnell have stated. Moore has vehemently denied the charges.

How did the story come together?

As Radio host Mark Levin pointed out on his show last week that there are several aspects of the case which don’t really make sense. To recap; a Washington Post reporter overheard a rumor at a Roy Moore event in Alabama about Moore sexually abusing four girls 38 years ago, then found the women, interviewed them, and the rest is history.

While reporting a story in Alabama about supporters of Moore’s Senate campaign, a Post reporter heard that Moore allegedly had sought relationships with teenage girls. Over the ensuing three weeks, two Post reporters contacted and interviewed the four women.

Adding to the list of questionable circumstances - one which the Washington Post oddly omitted from it's report, is the fact that one of Moore’s accusers, Debbie Gibson, worked as a sign language interpreter for Hillary Clinton and Joe Biden, and is actively campaigning for Moore’s Democrat opponent, Doug Jones.

The Washington Post failed to disclose that one of Moore's accusers was a sign language interpreter for Joe Biden and is a volunteer for Moore's Democrat opponent. 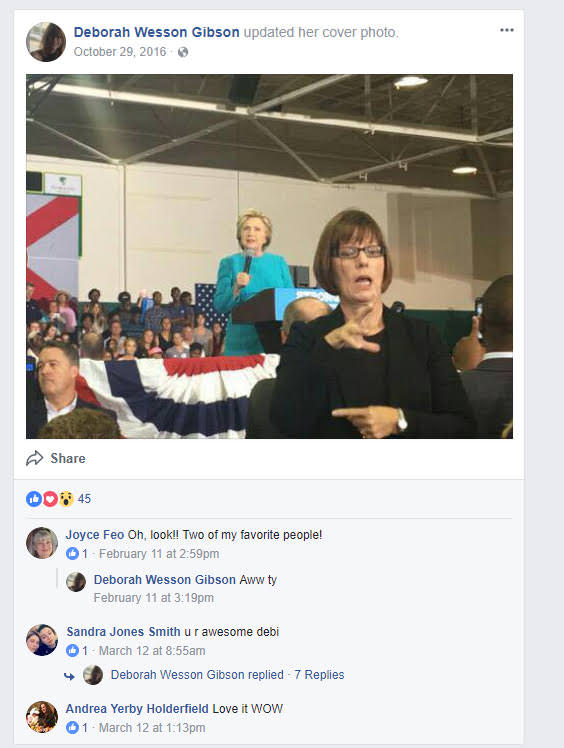 Another Moore accuser, Leigh Corfman, has claimed “several pastors at various churches made sexual advances at her.” This 3x divorcee who has also filed for bankruptcy three times.

Purportedly Moore’s main accuser Leigh Corfman has had three divorces, filed for bankruptcy three times, and has been charged with multiple misdemeanors.

Posts on Moore's FB page indicate that Corfman, has claimed several pastors at various churches made sexual advances at her.

She says that her teenage life became increasingly reckless with drinking, drugs, boyfriends, and a suicide attempt when she was 16.

As the years went on, Corfman says, she did not share her story about Moore partly because of the trouble in her life. She has had three divorces and financial problems. While living in Arizona, she and her second husband started a screen-printing business that fell into debt. They filed for bankruptcy protection three times, once in 1991 with $139,689 in unpaid claims brought by the Internal Revenue Service and other creditors, according to court records.

In 2005, Corfman paid a fine for driving a boat without lights. In 2010, she was working at a convenience store when she was charged with a misdemeanor for selling beer to a minor. The charge was dismissed, court records show.

The WaPo reporter who penned the article wrote fake check, according to an 2011 Red State report

Ms. McCrummen has a rather interesting criminal history herself, as public criminal records in multiple states stretching across 4 time zones have shown.

Ms. McCrummen’s criminal history began with North Carolina Case # 1992 CR 00654, a violation of the Article 19 – False Pretenses and Cheats section of the North Carolina Criminal Code. Ms. McCrummen was convicted of a crime punishable by up to six months of imprisonment for writing a hot check that was deemed worthless.

Last but not least, former Secret Service agent Doug Lewis (@umpire43) has made an unsubstantiated claim that a WaPo reporter named “Beth” offered a family friend $1000 to accuse Roy Moore, and that a tape of the offer is in the hands of the DA.

A family friend who lives in Alabama just told my wife that a WAPO reporter named Beth offered her 1000$ to accuse Roy Moore????

She has a pic of the woman named Beth and taped the conversation on her phone.I told her to take it to the DA,s office but be sure to keep a copy. https://t.co/crHHrgkVGb

I have learned more about the WAPO reporter. I am forbidden to post her last name or address but I can tell you she lives in VA (coincidence ya think)

She has worked for 6 newspapers that I also am forbidden to name. She is a married with children and is a solid Democrat, Donated to Hillary & DNC in 2016 https://t.co/U6Q5iTGXqu

She is dealing with her Co DA right now Melanie. She is forbidden to say anything about this for now by that office. I am also restricted or I will be charged https://t.co/b4ib63EeXU

Again – if Roy Moore took advantage of four young women 38 years ago, it is reprehensible and he should face justice if at all possible. That said, several troubling aspects of the Moore accusations have come to light in the days since the report, casting what many feel is reasonable doubt on the entire thing.

Moore has denied the allegations and issued the following statement:

Our children and grandchildren’s futures are on the line.

So rest assured — I will NEVER GIVE UP the fight! (4/4) #ALSen pic.twitter.com/QfN0GM7EMh